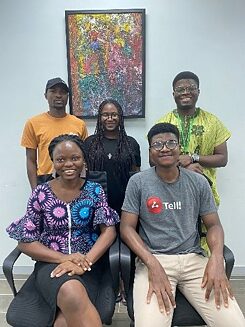 ©Tell Africa Now more than ever, the need for safe communities in Nigeria is significantly felt. Following the events of the #ENDSARS protest of 2020, we see the utmost need for Nigerians to speak up and protest against every form of injustice. The "Memoirs of Nigerian University Students" (MONUS) anthology is our way of giving every young Nigerian university student a chance to tell their true-life stories and incite meaningful conversations that can spark positive action in the Nigerian tertiary education system.
We launched this initiative in 2018 to create a compendium of compelling true-life stories of Nigerian students across various universities, with the aim of directing the torch of attention to the decaying state of tertiary education in Nigeria. We have published two editions of this anthology and recorded over 5,000 entries from 30 Nigerian Universities. These entries ranged from prose to drama to artworks and pictorial representations, and explored various themes like rape, cultism, examination malpractice and sex-for-grades. The last edition was edited by foremost Nigerian Investigative Journalist, Fisayo Soyombo and an award-winning AFP journalist, Mayowa Tijani.
We hope to continue this project with the aim of driving attention towards the decaying state of education in Nigeria. It's our pleasure to have this year's edition funded by the Goethe-Institut. 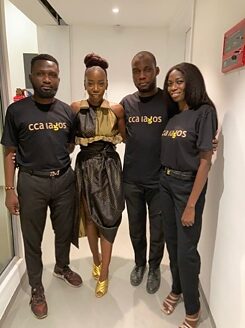 ©Traces of Ecstasy “Black men from the Third World need to reveal either to our own peoples or to the western world a certain shocking fact: We can desire each other” Rotimi Fani-Kayode.
Traces of ecstasy is a series of interactive works presented in a gallery space. We will use a bedroom installation, moving bodies, text and display of items of ecstasy as tools for questioning the social, economic and cultural forces that frame Masculinity and male vulnerability in Nigeria. During the exhibition, the bodies will perform as objects of aesthetic contemplation. The audience are allowed to interact with the work in real time, giving priority to the act of audience engagement as opposed to traditional display of artworks within a white cube space. I will explore how the body takes shape in space and time and use the male body as a tool to overwrite and parody traditional imaginations of masculinity. Tearing apart the many layers that resists vulnerability to examine via performance the power of male intimacy, while traveling through an existing maze of guilt and shame, morality, love and personal identity. “The work will exist in its remains, memories and objects. In the rumpled bed sheets, in the items of ecstasy and body images collected in the bedroom”. These are the traces of ecstasy.

Son of a Pepper Seller 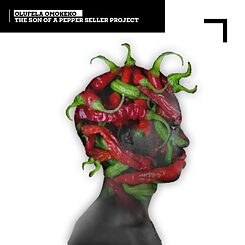 ©Son of a Pepper Seller Son of a Pepper Seller is a personal recollection of events during the lockdown in 2020 presented as a visual experience using crops and vegetables. As an installation art, it is an x-ray of human struggle in the process of putting food on their tables during the pandemic with perishable crops and vegetables.
In expanding the scope of the project, I am collaborating with an Agriculturist from the Agricultural extension and rural development Department, University of Ibadan. And together, we came up with localized ideas of preserving perishables crops for future use as we are still in the period of uncertainty.
The interruption of the supply chain and other crops are now included in the intervention, which is now thought of as a solo exhibition that uses Agricultural products as material for artistic expression and intervention as the next decades usher us into season of unpredictability. 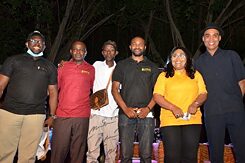 ©Freedom Vibes Poetry Concert UNESCO describes poetry as “one of humanity’s most treasured forms of cultural and linguistic expression and identity.” According to UNESCO, poetry is practiced in every culture and on every continent. It speaks to common humanity and shared values, transforming the simplest of poems into a powerful catalyst for dialogue and peace. The Freedom Vibes Poetry Concert series is a cultural initiative to be curated by convener of the WORDslam Poetry Concert and World Poetry Day Cafe, Jahman Anikulapo, in partnership with Unchained Vibes Africa, an organization that leverages the power of the arts to promote civic education, good governance, human rights, cultural diversity and the spirit of solidarity in Africa. 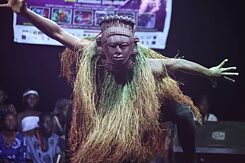 ©Boju Boju Boju Boju is a game of hide-and-seek played on call-and-response in moonlight nights in Nigeria. Olowu Busayo, Sinimi Jay and Cécilia Ettlin created Boju Boju Night, a concept made of multidisciplinary collaborative performances to open a space of questioning identity and reality, a deep research into and remembrance of the essence of self.
What kind of shapes did we take over the years? What is beyond the actual narratives of ourselves? Are the legacies of traditions, education, social and local environment guiding or confronting our personal experiences and intuitive feelings of Life?
What is real and what is not?
The performances are contemporary interpretations of rituals inspired by two different continents' cultures, Europe and Africa, through one powerful symbolic medium: The mask. As much as a philosophical and metaphorical representation, the mask holds deep cultural and spiritual meanings in Nigeria with the masquerade traditions and also in some part of Europe like in swabian-alemannic cultures (east France, south-west Germany and Switzerland, areas mainly alongside Rhine River) with their carnivals traditions and local folkloric celebrations. 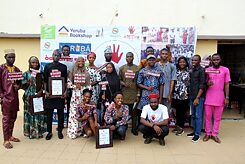 ©ÀTẸ́LẸWỌ́ ÀTẸ́LẸWỌ́ Cultural Initiative (atelewo.org) was founded in 2017 by Rasaq Malik and Oredola Ibrahim as a response to the myriads of challenges and threats facing the preservation and survival of the Yorùbá culture and language.
Ògbóǹtarìgì is a docuseries project by ÀTẸ́LẸWỌ́ to identify and celebrate old veteran Yorùbá authors who have made great contributions through their works and life activities to Yorùbá literature via YouTube documentaries, interviews and visibility on online platforms. Our first subject was Bàbá Láwuyì Ògúnníran.
Our objectives for Ògbóǹtarìgì is to cast a spotlight on each of the selected authors and to showcase their contributions with respect to Yorùbá literature and culture to the world. This is so to inspire younger generations on the feats and works of the selected veterans and to also motivate them to want to contribute to the development of Yorùba ́literature and culture; to increase the visibility and representation of Yorùbá authors online thereby contributing to helping to achieve decolonizing the internet by telling the stories of these underrepresented people on the internet. 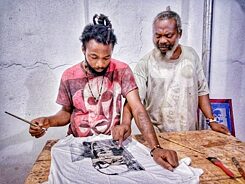 ©Oluosupa Art & Culture Training Academy OACTA project 2022, ‘Indigenous and Contemporary Cultural and Creative Aesthetics through Textiles, Soil Painting, Ceramics, Performance, Photography and Videography’ aims to expand and build on its manifesto to educate, create awareness and train secondary school students about the rich cultural and creative legacy within their immediate environment.
This summer, ( August 2022) OACTA plans to execute a dynamic series of participatory training  workshops  and cultural tours aimed specifically  at  creating awareness and practical training for secondary school students. They will be provided with skills and knowledge of making local Textiles, Soil Painting, Ceramics, Performance, and Photography & Videography.  The vision is to facilitate a viable, fun a creative space for young students to explore, interact and learn new skills within the context of indigenous and contemporary art forms accessible to them. 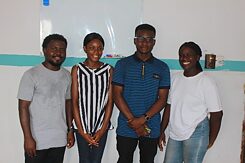 ©Times and Trends Times and Trends follows the annual Afrika-Writes programme of four days’ workshop and one day cultural and literary event. This edition is a multidisciplinary art event that will hold in two phases: a workshop on performance poetry, theatre, and street photography of different areas in Makurdi for students and young adults. The workshop will hold two days each for the different categories, after which the participants will showcase what they were able to produce during the course of the workshop.
The event will feature a grand finale on the theme “We are Rare and We are Here: Insight into 4th Generation Nigerian Writing”. The new waves of Nigerian writers have not been given critical attention in the discourse of writing in Nigeria. Therefore, we hope that through this project, they will be brought to fore, and a performance of the kind of art that surrounds their era also being performed.
The final event will end with a potpourri performance from Benue Poetry Troupe. The event will also feature an open-mic performance where young and established artist will share the stage in presentation of their works. 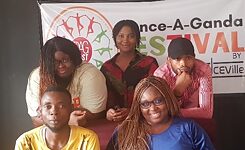 ©The DaVID Conference (Dance Ville International Dance Conference), has been a platform to kick-start discussions and explain methods of practice within the Nigerian dance industry from an international view.
This year, we investigate the process used to curate and document ballet (which is one of the dance styles with the most information and most widely performed/taught dances in the world.) and compare it with what is obtainable with Nigerian dances. It is a two day virtual event, which we propose to have individuals from currently working on dance and cultural documentation in attendance. Although participants will be expected to register individually, multiple hubs/dance communities will host centers which will connect virtually for the conference. 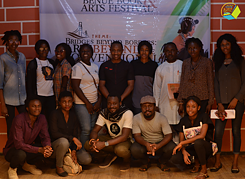 ©The Benue Book and Arts Festival (BBAAF) The Benue Book and Arts Festival (BBAAF) is an annual cultural book, arts and development event. The highlight is a week-long virtual and [one or two day] physical summit that brings together several artists (writers, thinkers, painters, etc.) for meaningful engagements and workshops geared towards the festival's vision, which is 'changing the narrative for sustainable development and positive enhancement.
BBAAF is in its 4th year after having its maiden edition in 2019.
This year's edition is billed for 20th to 25th June 2022 and is themed 'ART AND THE CONVERGENCE.'
The project has involved various names from West Africa, including H.E Eunice Ortom, Chuma Nwokolo, Professors Niyi Osundare, Moses Tsenongu, Leticia Mbaiver Nyitse, and Dul Johnson; Eric Ngalle, Abubakar Adam Ibrahim, Dr Maria Ajima, Bash Amuneni, T. J. Benson, Servio Gbadamosi, Amara Chimeka, Daisy Odey, past Presidents and Chairmen of the Association of Nigerian Authors, to mention a few.
Our belief is that this festival will be a platform for value reorientation, cultural promotion, creativity celebration, capacity building, and a means towards positive reformation through meaningful engagement and the exposure of youths in different programmes.

‘What If?’ A Performance of Social Justice 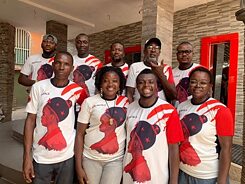 ©‘What If?’ A Performance of Social Justice This project which ultimately happens as a public stage production is a culmination of workshops, lectures, games, etc. It is a creative engagement to situate social justice in the context of Nigeria’s competing realities through the prism of Israel Meriomame Wekpe’s direction of What if? (A stage play).
The project rests on a careful and deliberate appreciation of the German playwright, Bertolt Brecht’s, engaging position on drama and social change. More importantly, this creative endeavour provides overlapping moments of experiences: It conceives theatre as a confluence of development – a vocation and a weapon of socio-economic change where young people can harness and garner the skills and competencies inherent in it that translates to JOBS. The theatre opens a value chain of opportunities that have entrepreneurial derivatives in our creative economy.
‘What if?’ as a performance of social justice is an intersectional portrayal of the Nigeria’s complexities and the subtle rendition of her engaging conversation with the diverse elements of ethnicity, corruption and leadership. It aggregates dramatic discussions of religion, elections and protests. 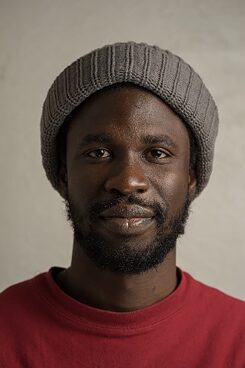 ©Visual Efiko The Nigerian culture scene has grown over the past couple of decades. Criticism about the space and its products have not grown in the same measure. Visual Efiko is intended to right that wrong. It is the first online and large-scale attempt to offer artful criticism of Nigerian music, films, music videos, documentaries, and comedy skits. The entrée of the project is a website housing independent criticism and reviews on Nigerian art (and art made by Nigerians) wherever they may be found within the country and outside of it. As a preface to its launch, the platform will host a critics’ workshop for writers and aspiring critics."