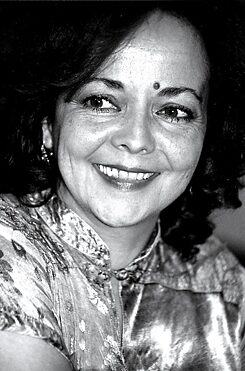 k The Centre for Contemporary Art, Lagos & the Goethe-Institut Nigeria cordially invite you to the Exhibition Opening of "The ()the Room" on December 8th at 4pm at CCA Lagos (9 McEwen Street, Sabo, Yaba).

During a visit to Germany in October 2016, Nigerian President Muhammadu Buhari stood beside German chancellor Angela Merkel and said to members of the press that his wife belonged to “his kitchen, his living room and the other room”. His (by now) infamous remark went viral as #TheOtherRoom - a hashtag that denotes a dominant patriarchal narrative within Nigeria and many parts of West Africa: that womxn belong in the “kitchen” or the “bedroom” to satiate men’s hunger. This type of belief reduces the role of womxn within society to one of servitude and to one that is defined only in relation to their male counterparts, or by the ‘male gaze’.

The ()ther Room is an interactive exhibition that uses visuals, sound & performance to speak to the different ways in which womxn artists are reconfiguring womxnhood in relation to their personal and cultural experiences. In fact, by offering contextualized & fluid narratives that emphasize healing, resilience & memory, restrictive and archaic definitions of what it means to be a womxn - which are so widely held in a stubbornly patriarchal society – are debunked.

Soliloquy of a Distant Thunder (I) by Dandelion Eghosa
Performing Nostalgia, Body, Memory and aesthetics of "Past Homes''
This short film is an excerpt from an ongoing research project at the Dutch Art Institute, It explores a collection of memories from a perspective of imagining freedom (as an incomplete project) and healing via language inherent within the ritual of remembrance.

Dandelion Eghosa is a 27 year old non-binary visual artist from Nigeria, who is currently studying at the DAI Art praxis-Artez MA program in the Netherlands. Their work with diverse visual mediums including photography, digital, analog collages, and film. Their interests lie in documenting the expressions of everyday life and in highlighting marginalized identities particularly the Afro-LGBTQ+ community. Their work offers a fresh interpretation of queer imagery and encourages the expansion of human thought, beliefs and feelings.

Birthscapes by Yadichinma Ukoha-Kalu
her piece, an immersive plexiglas installation, is part of the series Birthscape (a play on two words 'birth' & 'landscape') that poses the question "what defines the feminine" as its starting point. According to the artist, "Birthscape has metaphorically adopted the idea of the poetry that landscapes represent, giving an opportunity for us to reconnect with ourselves and perhaps gain some inspiration or perspective."​

Yadichinma Ukoha-Kalu is a self-taught experimental artist and illustrator based in Lagos. Her practice centers on explorations of line, form, space and boundary which she expresses through a variety of media including painting, drawing, sculpture, film and technology. She often creates environments across dimensions which bring together a combination of abstract elements, textures and material that interact with each other. Yadichinma is interested in and inspired by the process of things and how they come to be, leading her to approach her life and environment with child-like wonder and curiosity. It is with this curiosity that her interest in materials expands as she believes that objects of varying degrees carry their own worlds and systems.


Asiwaju, the Journey through revealing the Woman by Taiwo Aiyedogbon
A participatory performance which appropriates celebratory dances, political procession & sound to draw attention to the powerful contributions of Nigerian women in shaping the country’s political landscape, past & present. Asiwaju is a popular Yoruba term used to denote political leaders and the aim of the project – which is based on research on notable female Nigerian public figures that started during an artist residency at the Treehouse, Lagos, from May to June 2021 – is to question how national histories are written and to re-tell these narratives by giving a voice to those women that have been marginalized.

Taiwo Aiyedogbon is a Lagos-based visual artist, who works with a variety of media, including painting, experimental drawing, sculpture, installation and performance art.  Her work often touches upon current issues related to politics and the environment in the city of Lagos. Recently, she started to dive into creating conversations about gender & representation. She graduated from the Department of Fine Art at the Yaba College of Technology majoring in Sculpture in 2016.
She has participated in exhibitions and performances including ‘African Time Restaurant’ (Malmo, Sweden) 2015, ‘Ipele’ [phase] at the National Museum (Lagos, Nigeria) 2017, ‘Threshold’ as part of the inaugural Lagos Biennial (Lagos, Nigeria) 2017 and ‘Flip’ (Kumasi, Ghana) 2019.

In addition, the Podcast-Series "Speaking for Myself" is integrated into the exhibition. In each one of the six episode, an influential womxn in Nigeria’s cultural sector - a gallery owner, curator or arts writer - speaks to a womxn artist whose life and work has inspired her. The conversations offers intimate glimpses into individual experiences of womxnhood and the challenges and joys these twelve womxn face in their quest to be creative and find meaning in their everyday lives.

This exhibition aims to invoke diverse expressions of womxnhood, the multiplicity of experience and the importance of representation. The term “womxn” is used to acknowledge that womxnhood is in flux, shaped by a myriad of lived experiences.

***all Covid-19 safety protocols will be observed***