How is freedom doing in Europe? | Illustration: © Goethe-Institut e.V.

From 30 October until 1 November 2020, the Goethe-Institut’s “Freiraum Festival” will put freedom in Europe at the centre of discussion. Join us live online!

How is freedom doing in Europe? In digital and physical formats in Brussels, Berlin and around 20 other European cities, intellectuals, cultural professionals and artists will discuss new perspectives and alliances in Europe on the occasion of the German EU Council Presidency.

What does freedom mean in europe today?

Since 2017, the Goethe-Instituts in Europe have been working with over 50 partners on the question of what freedom means in Europe today. Where is it in danger? How can it be strengthened? Free spaces are being restricted by growing nationalist and populist currents, but recently also by contact restrictions, curfews and border closings due to the coronavirus pandemic.

With the digital and local “Freiraum Festival”, the partners of the Freiraum network are now starting open dialogues on the new realities in Europe and on solidarity for a resistant and inclusive society. A multitude of voices and perspectives from all over Europe will be gathered in Brussels and around 20 other European cities.

A manifesto for diversity in Europe

The opening of the festival on the evening of 30 October 2020 will be broadcast live on the festival-webseite.
„Freiraum Festival“ / Filmcrew Citizen Motion / Copyright: Goethe-Institut e.V.
Following Goethe-Institut secretary-general Johannes Ebert’s welcome, the slam poet Samira Saleh will read the “Freiraum Manifesto” in Brussels – a call to take the side of lived diversity in Europe. Johannes Ebert will also talk with sociologist Eva Illouz and political scientist Ivan Krastev about a new normal after the lockdown. The debate will be held as part of the “Neue Wir-Erzählungen” series organised by the Goethe-Institut with the ARD liaison office in Brussels and the weekly newspaper Die Zeit. 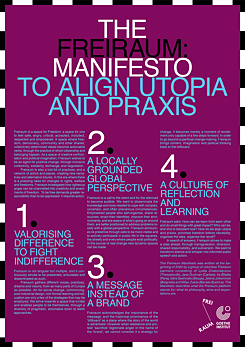 The political consequences of Covid-19

On the second day of the festival (31 October), Eva Illouz will open the Europe-wide online programme with her lecture “Can the home be a haven from a world in crisis? Reflections on the politics of Covid-19.” Illouz will illuminate the much-invoked “own four walls” as both a refuge and a prison. The role played by social movements in solidarity in Europe and the freedom of art and the art scene are further focal points of the diverse festivalprogramms. Join us live online. Registration is not required.
„Freiraum Festival“ / Filmcrew Citizen Motion / Copyright: Goethe-Institut e.V.

“Freiraum” is a project by the Goethe-Institut that has been investigating the status of freedom in Europe together with 53 actors from culture, science and civil society in 42 countries since 2017. The “Freiraum Festival” is organised in cooperation with a team of curators from the partner network and under the artistic direction of ArtBOX Creative Arts Management. It is part of a series of projects that the Goethe-Institut is carrying out across Europe for the German EU Council Presidency.