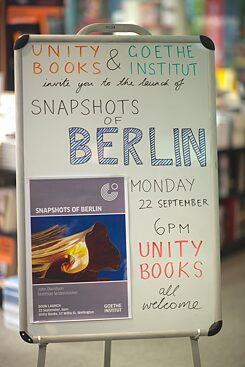 During an extended stay in Berlin in 2013, I started writing poems about this wonderful city. On my return to New Zealand, I added further poems that reflected earlier visits or periods of residency going back to 1999, and supplemented all these by drawing on the experiences of my wife Brigitte who’d lived in the divided city in the 1960s and had visited on other occasions subsequently.

I then asked our friend Matthias Seidenstücker, who was at the time living in Berlin after spending a considerable time in Wellington, if he would provide photos from his extensive photographic archive. He readily agreed. The idea was to offer quirky and unusual images rather than tourist picture postcard shots.

After that, I  approached the then Director Bettina Senff to see if the Goethe-Institut New Zealand would publish the volume and partly subsidise the venture.  She agreed, and Ulrike Rosenfeld assisted in obtaining the services of Litchfield + Fields Ltd for the design and the Image Centre Group for the printing. The result was a most attractive volume entitled Snapshots of Berlin, with poems and photos on adjacent pages, the image sometimes, but not always, illustrating the paired poem or some aspect of it. Notes were added at the back, explaining features of Berlin for those with little or no familiarity with the city, and clarifying German words, phrases and other German references for English speakers. Explanations of New Zealand references were also included for readers in Germany.

The book was launched on 22 September 2014 in the presence of a large crowd at Unity Books Wellington, at a time when Matthias was on one of his many visits to New Zealand. A German launch was held in Berlin the following month.