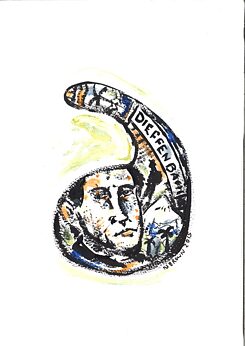 00:00 00:00
This poem is part of a sequence I wrote to celebrate NZ being the country of honour at the Frankfurt Book Fair in 2012. They were about the German Naturalist, Ernst Dieffenbach, who visited NZ for 2 years in 1839.  He wrote about many adventures in NZ and had the Chatham Island rail, which later became extinct, named after him. An example of the rail is kept in the London Museum of Natural History.

I wanted to write the sequence drawing on the Māori oral tradition of sung or intoned poetry.
This piece was composed to the tune of 'Ich hab die nacht getraumet’ an old folk-tune Dieffenbach is likely to have recognised.

Following his Early Death
from Typhus, Ernst Dieffenbach
Considers the Extinction of
a Small Bird Carrying
His Name in the London
Museum of Natural History.


My friend, sometimes it frightens,
I hear the darkness call.
Songs and dreams and fragments,
I fear that this is all.

Your feathers, brown and yellow,
My cloak and shirt of wool,
The daytime and the nighttime,
Across each coat must pull.

Can you hear the owl laugh?
The robin in her tree?
I listen for the huia.
Perhaps she’ll sing for me.

My friend, sometimes it frightens,
I fear the darkness too.
Songs and dreams and fragments
Are all I have for you.

Songs and dreams and fragments
This one I’ll sing for you.

Glenn Colquhoun is a poet and doctor. He was born in 1964 and grew up in South Auckland. He completed a BA in English and Education at Auckland University in 1987. He later attended Auckland Medical School, graduating in 1996. In 1994 he took a year off his medical training and spent that time in Te Tii, a small Māori community in Northland. This began a lifelong relationship with the community and its people. His first collection of poetry, The art of walking upright, was written about this community. He returned there later to work as a doctor in the Bay of Islands.

In 2004 he was awarded the Prize in Modern Letters. This was, at the time, the largest award made to an emerging writer anywhere in the world. In 2005 he moved from Northland to Waikawa Beach in Horowhenua where he began work as a GP at Hora Te Pai, the iwi medical practice for Te Ati Awa ki Whakarongotai.

In 2010 Colquhoun won a Fulbright Scholarship to Harvard University to study medical humanities and in 2011 he helped to establish the Horowhenua Youth Health Service, where he continues to work in adolescent medicine. In 2012 he was part of the Transit of Venus poetry exchange at the Frankfurt Book Fair and in 2014 represented New Zealand on the Commonwealth Poets United poetry project which celebrated the Glasgow Commonwealth Games that year.

He performs his poetry regularly throughout the country.