I became a supporter of the Goethe Institut after being approached by Dr Knut Heuer when he took over as director.  I was operating a touring exhibition service for art galleries and museums; Knut was able to offer New Zealand several excellent contemporary art exhibitions organised by IFA (Institut für Auslandbeziehungen).  An enjoyable friendship soon developed with Knut and Wiebke;  and it was through them that Ken Gorbey and I became friends with Herbert and Ulrike Beck.  The Becks spent their first Christmas in New Zealand with us; we never imagined that 10 years later we would celebrate our first New Year’s Eve in Berlin with them. 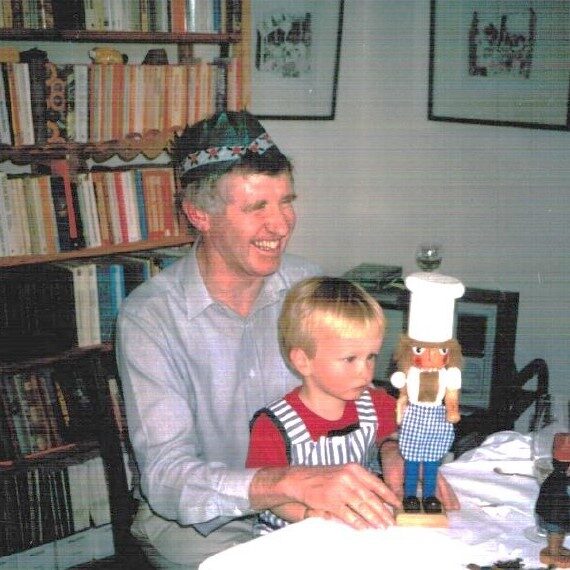 ‘Silvesternacht’ is from a portfolio of unpublished essays originating from letters faxed home from Berlin to my 89-year-old mother in Christchurch.  Experiences and people by necessity are often merged in memoir writing, so I would like to include that old proviso: any similarity to actual persons is purely coincidental.

2001:  New Year’s Day was marred by hearing that a young man working for Jewish Museum architect, Daniel Libeskind, had lost the sight in one eye.  A freak accident, they said.  He had been walking home when a stray firework bounced off the pavement into his face. 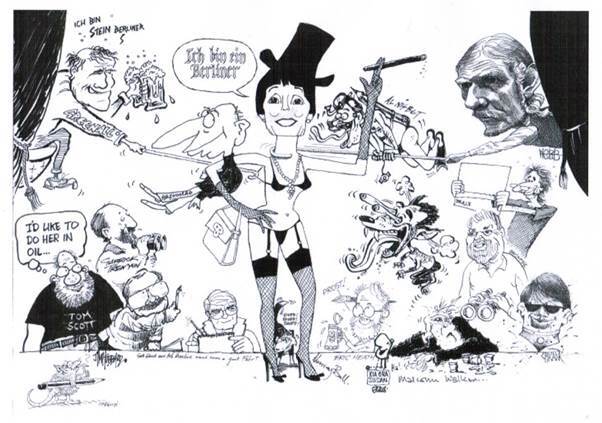 Farewell cartoon created by 17 New Zealand cartoonists for Susan Foster on leaving Wellington to join husband, Ken Gorbey, in Berlin. Bob Brockie’s caricature of Foster as a Weimar cabaret artist includes the words of John F. Kennedy in Berlin in 1963. | © Susan Foster The previous evening, we had been invited to celebrate with friends Carla and Bernd.  They lived some blocks away, but we decided to walk.  It was invigorating to be out in the cool air after a day inside.  We enjoyed crunching through the fresh snow, pristine and glistening like the pavlova I was carrying.  It was a chance to explore new streets, absorb more of the fabric of the city, the layers of history evident in the diversity of facades.  Plugged into the spaces between the old survivors – the late nineteenth/early twentieth century, heavily-decorated mansions, designed for a rising middle class – were the plain, post-war, roughcast exteriors of the Aufbauprogramm housing, erected between 1954 and 1960 by the (West) Berlin City State. I used to look for the identifying bronze plate inserted on the left or the right of the main door, an embossed Berlin bear, rampant between the words Aufbau and Programm.  In later years, came the new modern condominiums like one that had been built across the courtyard of our apartment in a former bombsite.
Carla and Bernd lived in a slightly grand, neo-Baroque building, war-damaged, repaired, and more recently restored to shades of its former elegance.  We rang the bell, shouted our names through the brass grill and waited for the buzz of the door unlocking. We crossed a Persian-rugged foyer to an ancient metal cage lift and clanked our way to the top floor.  They seemed genuinely in awe of the pavlova.  So was I.  The first I had ever made, although I didn’t admit it.  Instead, I wished that I had followed usual custom, brought flowers for the hostess; it was a more formal occasion than we had anticipated with several of Bernd’s work colleagues from the Ministry.  I was introduced to a tall woman with cropped fair hair.  As she gripped my hand, I heard a bone crack and a sharp pain rippled up my arm.  ‘I have been already once scuba diving near your Queensland.’
We played games in a polite and restrained manner.  The careful explanations in faultless English singled us out and seem to inhibit easy spontaneity.  Then the television was turned on for the British comedy skit, “Dinner for One”.  It was an old, black-and-white film.  ‘You will know the actor.  He is a famous English actor.’  Until that night, we had never heard of comedian Freddie Frinton.  Nor did we know the sketch, first performed on Britain’s seaside piers in the late 1940s.  Frinton plays an aged butler, James, to a refined, elderly Englishwoman, Miss Sophie.  Alone on her 90th birthday, she relives a previous celebration with four gentlemen friends, all now deceased.  To accompany each of the four courses, the butler pours the imaginary guests a succession of sherries, white wine, champagne and port.  He is then required to impersonate each guest drinking to the health of Miss Sophie. With every glass, sixteen in total, he becomes increasingly inebriated, unable to see straight to pour straight. Frinton’s performance is a tour de force as he trips, circumvents or leapfrogs a tiger skin rug carrying dishes and bottles to and from the sideboard. ‘The ssshame prusssheejah as last year, Miss Sophie?’ he asks as he is about to embark on another round of toasts.  ‘The same procedure as every year, James!’ comes Miss Sophie’s crisp response.  And, for many Germans, it is the same procedure every year; watching or performing “Dinner for One” is a New Year’s Eve tradition, one which we were to enthusiastically adopt.

Shortly before 12.00 o’clock, Bernd handed around long-stemmed glasses of sparkling Sekt and we floated with them down the sweeping staircase to the street below, now filling with local residents.  Although many were from the same building as our friends, greetings were limited – a polite nod, perhaps a Guten Abend.  Strangers in the snow, shadowy clusters forming and reforming in the long, narrow street.
Then it was midnight.  The church bells rang out and almost simultaneously the world exploded around us.  Strings of fireworks shimmied down from balconies above, rockets whizzed indiscriminately up and down the street, and our friends joined in with their own boxes of ammunition. Opposite, two floors up, a faceless shape operating a bazooka discharged jets of flames at two second intervals.  The still dark air filled with suffocating smoke.  Nowhere seemed safe.  I sheltered under a basement doorway, an innocent bystander in a seeming war zone.

Eventually, the all clear sounded.  The firing stopped.  The street emptied of people as they made their way indoors.  We thanked our friends and set out for the nearest underground station.  The snow, now slushy and yellow, was studded with ‘spent cartridges’.  Still in a state of shock, we joked about our baptism by friendly fire.  But we wondered about the post-traumatic effects of the noise and mayhem on an older generation of Berliners who would never forget the destruction of their city.
© Susan E. Foster, 2021.