Due to the picture overkill on the internet young generation photography is finding it hard to stand out and impress. A look at young talent promotion activities in Germany gives an insight on development trends. 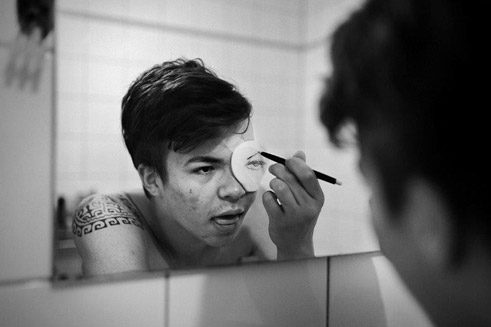 Fara Phoebe Zetzsche, “Stray Kids”, Lumix-Festival 2014 | © Fara Phoebe Zetzsche Photo essays that tell the story of people’s lives, reportages from conflict areas and war zones, stories from everyday life, from next door or from far, far away: photojournalism and young documentary photography in Germany and elsewhere are versatile and heterogeneous. They have a longstanding tradition in Germany. Back in the nineteen twenties the leading daily newspapers, magazines and publishing companies of Berlin and Munich provided the basis for pioneering photojournalists such as Tim Gidal, Stefan Lorant, Felix H. Man, and also for the first female photojournalists Gerda Taro, Marianne Breslauer and Gisèle Freund. Stories told in pictures were extremely popular among readers. This marked the beginning of photojournalism and it also led to the birth of modern-day magazines.

In an age when attention has become a scarce commodity It is not only new technologies and digital photography that have had an impact on the genre over recent years, it is above all the trend towards fast, short sequences of images, snapshot pictures, dramatic and emotionally loaded images that has driven out photo reportages on political and social issues, quieter stories that deeply affect us in the tradition of immersion. Less well known photographers seldom have the opportunity to publish larger image series. For this young generation of photojournalists and documentary photographers It is therefore all the more important to encourage promotion awards as well as exhibitions in museums and contacts and networks that are offered within the scope of international photo festivals.

Since 1994, the Wüstenrot Stiftung has been supporting young graduates from German universities every two years with four awards, endowed with 10,000. – euros each, for documentary photography projects. The award is organised through the Fotografische Sammlung of the Museum Folkwang and by its director Florian Ebner. In early 2014 the exhibition, Was war und was ist (Past and Present) – The Wüstenrot Foundation Awards for Documentary Photography, with new works by the prize winners, reveals the many different approaches, perspectives and image languages in contemporary photography.An important event and institution for contemporary documentary photography is the Munich Foto Doks Festival that is held once a year in October. The venues for the event are the MaximiliansForum and the Munich Stadtmuseum where photographers are offered space for presentations, exchange, talks, podium discussions and space to explore new works. It is here that the Zeit Magazine Photo Prize, endowed with 5,000 euros, is awarded and winners are given the opportunity to develop and implement a photo reportage together with Zeit editors.

The Lumix Festival for Young Photojournalism, that is held in Hanover, excellently demonstrates how young talent’s potential can develop through these promotion projects. Some 35,000 visitors came to the event from June 18 to 22, 2014. Since 2008, Rolf Nobel, initiator of the bi-annual Lumix festival and professor of photography at the Hochschule Hannover has been bringing together the best up and coming young photographers from all over the world. Almost 1,200 entries from 71 countries were submitted in March 2014. And Wüstenrot scholarship holders Birte Kaufmann and Till Müllenmeister were among the distinguished international young photographers with the best 60 reportages and photo essays that were on show at the exhibition.

The Finnish photographer Meeri Koutaniemi received the Freelens award at the Lumix festival 2014, endowed with 10,000 euros, for her reportage Taken. The Lumix Multimedia Award was shared by the U.S. photographer Christopher Capozziello for his multimedia reportage “A State of Mind“ and Patrick Slesiona, a student at the Hochschule Hanover, for his production “Zwei Seiten – Leben mit der unverzeihlichen Tat“ (two sides – living with an unforgivable deed) that was made with Marcel Wogram und Christian Werner. The Lammerhuber Prize, endowed with 5,000 euros, for the most impressive story of everyday life went to Fara Phoebe Zetzsche. For her portrait work “Stray Kids” the Gera-born graduate from the Hochschule Hanover spent time with street children in Berlin. The Public Choice Award went to Norwegian photographer Andrea Gjestvang for her portrait series “One Day in History“.

The Lumix Festival offers a platform for work showing everyday life and social reportage, stories, backgrounds and topics of social and political relevance. Current events in troubled areas, ecological disasters and human rights violations, and also the chaos of everyday life just around the corner. Other themes at this International Festival for Photojournalism include landscape photography and stories told in a responsive and sensitive way.