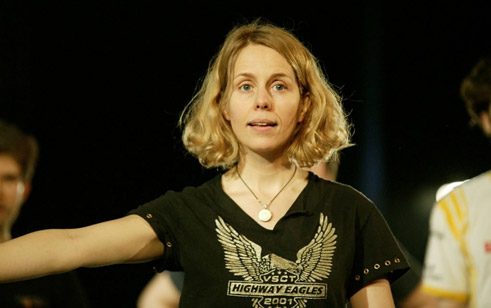 The Goethe-Institut in co-operation with Wellington City Council offers artists from Germany a 3 month scholarship to work and live in New Zealand. The artist will reside in Wellington to engage and network with their New Zealand colleagues as well as seeking inspiration for their projects and fostering intercultural dialogue.

In 1996, Uta Plate started off the project 'theatre in prison' in cooperation with the local ministry of justice in a juvenile prison in Thuringia. During these two and a half years she also ran theatre projects with elderly people living in old people's homes, as well as projects with children staying in homes for asylum-seekers.

In 1999, Uta Plate joined the ensemble of the Schaubühne am Lehniner Platz where the new artistic team around Thomas Ostermeier and Sasha Waltz started. There she run workshops and after-show talks to accompany each production, offering an approach within the context of the 'laboratory' Schaubühne. Often collaborating with schools and universities, Uta Plate creates passion for theatre amongst young people. In 2010 she was director of the first international Theatre-School-Collaboration of TUSCH, titled IDEAL CITY with pupils from Berlin and Warsaw.

Uta Plate further direct the youth theatre company 'Die Zwiefachen', which devises a show per year through improvisation, movement and writing workshops. The members, from 15-23 years old, all are or were part of a housing programme run by social workers. Some international cooperation took place: with a youth theatre group from England (2005), a Capoeira-Group from Brazil (2006) and a theatre group of Roma-youngsters from Hungary (2007). In 2008 they had a collaboration with the Aahoran Theatre (Nepal) and presented the play at youth theatre festival »Contacting the World« in Liverpool.

Uta Plate has been running theatre and movement projects internationally, at the University of Santiago, Chile (2004), at the University of Beijing/China (2005), at the Hellenic Education Network/Greece (2006), Trondelag Theatre, Trondheim/Norway (2007), University of Art Istanbul/Turkey (2009), National Theatre of Helsinki/Finland (2010), at the conference of children and youth museums »Hands On«, Ljubljana/Slovenia (2011), »Kedja«-Festival, Aarhus/Denmark (2011), Ashtar-Theatre, Ramallah/Gaza (2012). At the BACKA-Theater (Gothenborg/Sweden) she has developed the play »Run for your life« with 10 young people und 5 professional actors. (premiere February 2013).
In autumn 2014 she devises the play  »LIVE LIE DIE« with six old, six young and two professional actors at the 'Theater Neumarkt', Zurich. At the academy of Art (Zurich/Switzerland) she lectures theatrepedagogy.

In New Zealand Uta will work with Toi Whakaari students as well as other youth theatre organisations. She will also give performance workshops in youth detention centres.