The Goethe-Institut in co-operation with Wellington City Council offers artists from Germany a 3 month scholarship to work and live in New Zealand. The artist will reside in Wellington to engage and network with their New Zealand colleagues as well as seeking inspiration for their projects and fostering intercultural dialogue.

Janine Eisenaecher (*1983 in Stassfurt/ DE) works as freelance performance artist, curator, and writer since 2006. She developed her research-based performance practice within diverse collective contexts in Berlin that she had co-founded, such as the Berlin n@work (2005-2011, with Joern J. Burmester, Florian Feigl, Nicolas Galeazzi, Joy Harder, and Otmar Wagner), the artistic-academic group (e)at_work (2006-2011, with Michael Conrad, Joy Harder, Julia Hielscher-Szegedi, and Sonja Winkel), and the performance duo Eisenaecher/Harder CLAIMS (2006-2011, with Joy Harder). Within these groups as well as in her solo works, Eisenaecher mainly discusses the subjects of work/ labour and collaboration (of artists) as well as the politics and economies in the art field, and herein works on questions about identity, gender, care, solidarity, (post-) colonialism, and racism. In addition to that, she deals with ethnological phenomena (Antropofagia, Vaudou, Cargo Cults), with Rap and Hip-Hop cultures, with relations and interdependencies between art, feminism, and activism, and with questions of self-organisation and institutionality. 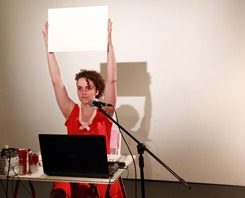 © Boss Eisenaecher develops representation-critical group, duo, and solo performances in multidisciplinary formats, that basically work with strategies of incorporation/ appropriation, and that always aim at emancipation, self-empowerment, and transformation. For creating her performative, installation-like spaces of reflection, she uses her own and other texts, various objects and materials, her voice, sound and video works. Up to now, she presented her performances in different festivals and events across Europe and North America, mainly in non-institutional art contexts.

Besides her performance practice, Eisenaecher works as a curator and writer, focusing on performance art and culture political questions. She was a co-curator and -organiser of the monthly  event Performer Stammtisch in Berlin (2007-2011, with Aline Benecke, Joern J. Burmester, Florian Feigl, and Siân Robinson Davies), of the Platform Young Performance Artists in Berlin (2010 and 2011, with Neil Jefferies) as well as of some smaller performance events in Berlin and Montreal. At the Berlin artist house and art association Flutgraben e.V., of which she is a board member since 2009, she realised the artistic programme and worked on the structures of the association on the basis and through the artistic-curatorial, collective institution-critical practice Inverse Institution (2011-2015, with Soenke Hallmann, Lydia Hamann, Kaj Osteroth, Jo Zahn, and Inga Zimprich). With her colleagues, she is working on a recapitulation, workshop series, and publication on this practice. In the last year, Eisenaecher co-initiated the research project How do we want to work together? (with Karolina Dreit, Aiko Okamoto und Felicita Reuschling) in which, by means of questionnaires and workshops, she investigates conditions and forms of the often precarious collaboration in freelance cultural production. 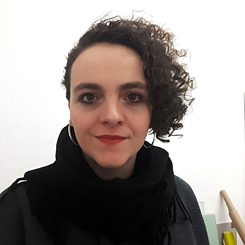 © Janine Eisenächer Eisenaecher studied theatre studies, general and comparative literature, and philosophy at Free University Berlin, and she holds a Magistra Artium degree in Theatre Studies. In her thesis PERFORMANCE ART SOUNDS (under Prof. Dr. Doris Kolesch) she investigated the importance of material- and action-based noises and sounds in contemporary performance art, which remains one of her research subjects and her performance practice. Janine lives and works in Berlin.