Professors Aleida and Jan Assmann – one a cultural and literary scholar, the other an Egyptologist – have studied forms of collective memory for more than three decades. In 2018, the husband-and-wife team were awarded the Peace Prize of the German Book Trade in recognition of their work.

For a humane society: Aleida Assmann

Before switching her focus to cultural anthropology in the 1990s, Aleida Assmann published numerous works on English literature. Her two most recent books, published in 2018, deal with human rights and responsibilities – identified in a subtitle as the “keys to a humane society” – and shed light on the remembrance culture and democratisation of Europe. The author’s averred intent: to “encourage a depressed public”.

The concept of cultural memory

Together, the couple developed the basic concept of cultural memory. Inspired by research on Ancient Egypt and building on the theory of collective memory advanced by sociologist Maurice Halbwachs, they defined a vehicle by which collected cultural knowledge is passed from one generation to the next – knowledge that determines a society’s awareness of time and history as well as its self-image and world view. Cultural memory is shaped by fixed points – momentous events in the past – which are kept in awareness by rituals, memorials or even by regular discussion. 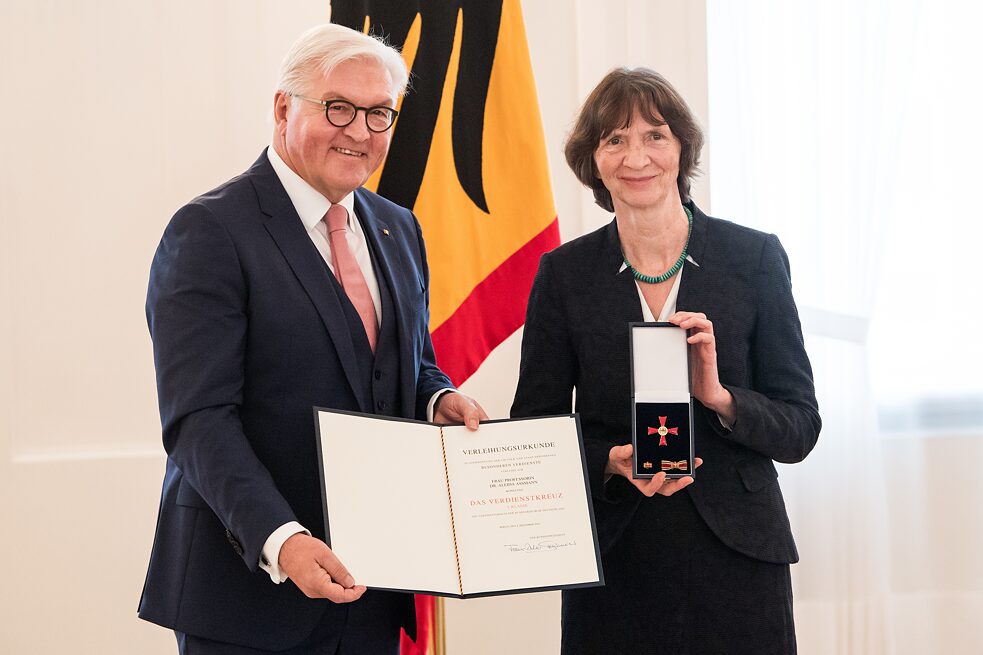 In December 2018, Federal President Frank-Walter Steinmeier awarded Aleida Assmann the Order of Merit of the Federal Republic of Germany in recognition of her work on commemoration and remembrance culture. | Photo: © picture alliance/Bernd von Jutrczenka/dpa

Reflection on the past

The Assmanns are credited with making a decisive contribution to German remembrance culture through their research on the politics of history, historical trauma, forgetting, processing and reflection. The two scholars believe studying the past is hugely important in order to understand the present: “We can no longer pretend we do not have a past and look exclusively to the future [...] expecting everything to be better,” says Aleida Assmann. The future invariably derives from the past.

When Aleida and Jan Assmann were awarded the Peace Prize of the German Book Trade in autumn 2018, many observers saw it as a statement. At a time when the “intellectual and moral core” of the country is “under attack from the far right”, this award is a “political signal”, wrote the weekly newspaper Die Zeit. The jury’s statement read: “Considering the growing political instrumentalisation of recent German history, she [Aleida Assmann] provides valuable clarification on matters of national cultural memory. [...] Egyptologist and cultural scholar Jan Assmann, through his extensive academic work, has stimulated international debate on fundamental issues raised by the cultural and religious conflicts of our time.”