Singing to ward off depression: VOICES FOR SELF-ESTEEM 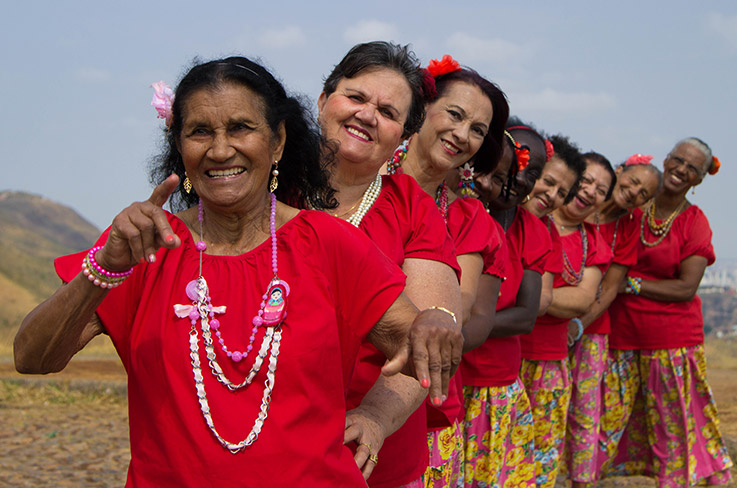 The choir group Meninas de Sinhá, comprised of women from 54 to 97 years old, has presented its members with an alternative to aches and depression for 20 years.
Valdete da Silva Cordeiro’s name is practically a legend among the participants of the group Meninas de Sinhá. For, she was the one who, back in 1996, managed to reinvent the lives of dozens of women who were living in a state of depression in the Alto Vera Cruz community, located in the periphery of Belo Horizonte. From Bahia, never having met her parents and never having even known her birthdate, Valdete arrived in the Minas capital at the age of five, adopted by a family, and possessed no identification documents.

Years later, she decided that her birthday would be on September 7th, the date Brazil had declared independence from Portugal in 1822. She celebrated her first birthday when she was ten, with a simple party in the backyard of the family that adopted her: she gathered a few “tostões” (pennies), bought a few sweets at the pub, improvised a cake in a shoebox and invited all the children of the “rich people” in the neighborhood.

It was also through the joyous celebration of her 50th birthday, at the end of the 1980s, that Valdete took the first steps to establish the group Meninas de Sinhá. The group came about because of a concern: Valdete could not bear to see so many women leaving the public health center with a bag full of medicine for depression. “I wanted to do something, but I didn’t know what. I thought: they didn’t need to take medicine. What they needed was more self-esteem,” the founder of the group used to say. She passed away in January 2014 at the age of 75.

The group Meninas de Sinhá, which will celebrate its 20th anniversary in 2016, is comprised of 24 women, most of whom are black and poor, between the ages of 54 and 97. Up to this point, with its first show in its own neighborhood, much as happened. “If today you ask me how we got here, I won’t know how to answer”, says dona Bernardina de Sena, also known as “Seninha,” who has been singing in the group since the beginning.

The trajectory of the group Meninas de Sinhá includes the recording of two CDs, a DVD in partnership with well-known artists, and even awards. In 2012, the group gave a show at the Brave Festival in Wrocław, Poland. “As older, poor, black women, representing Brazil in a country as far away as Poland was deeply satisfying for us,” Seninha says. In addition, without losing the ties to their own history, the group continues doing shows in old folks’ homes, nursery schools, prisons, schools and hospitals.


A choir of voices

Through nursery rhymes, the group’s repertoire mixes music from the public domain, its own songs, and reinterpretations of folk songs. And, gradually, the musicality has also become richer, with the introduction of a variety of musical instruments, especially percussion, which they learn to play in workshops.

Daniel Nunes, drummer for Constantina, an instrumental band that in 2010 took the stage with Meninas de Sinhá, speaks of when he met the singers. “The collaboration with voice always posed a challenge to us, since we are an ensemble of instruments. These women brought a force that instrumental sound could never achieve,” he recalls. According to the musician, the uniqueness of the group is how it “makes the voice the most peculiar musical instrument ever to be invented. This group got together to tell stories or, rather, to sing stories through the simplest melodies we could have ever heard during our band years.”

The cultural producer and art educator Gil Amâncio, who is part of Meninas de Sinhá’s history, highlights one aspect of the group: “These gals manage to do a very cool thing which is to create this arc between past and future. They retrieve their songs from their childhood memories, but they don’t stop there,” he says.

When asked about where they get the energy to rehearse each week, to travel, compose new songs and do all the shows, they usually reply: “We have aches and pains in our knees, shoulders, and backs, but in song we become children again and nobody remembers their aches and pains.”

Victor da Rosa is a writer and a doctor of literature. He lives and works in Belo Horizonte.