Moving to a new city means creating new social networks. When I arrived in Wellington in early 2013 to start my doctoral studies at Victoria University, I knew only a handful of people whom I’d met during my student exchange a few years earlier.

Unfortunately, most of the people I got to know during those months were exchange students themselves, which meant that they sooner or later had to move back to their home countries. However, knowing only a few people goes a long way in a small city like Wellington where everyone knows everyone.

One of the main techniques I adopted to get in touch with different local musicians was what is known in the Social Sciences as “snowball sampling”. This means that the researcher begins with a small number of known individuals from a specific group and expands the sample by asking those participants to identify other potential subjects. Thus the sample group gathers layers and momentum like a rolling snowball. During my very first weeks in Wellington I met Nick, a well-known and well-connected local musician and a PhD candidate in musicology. We talked about his research on New Zealand’s jazz scene and my research on music and place, and he got me in touch with several local musicians through Facebook. He introduced me, and asked them if they were interested in taking part in my project – that was when the (snow) ball started rolling. 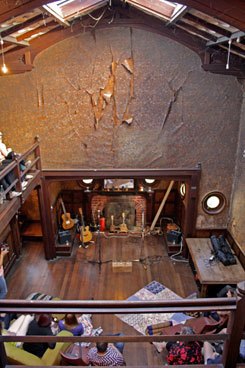 The Moorings ballroom prepared for a gig | © Katie Rochow Another great way to expand a social network is by approaching musicians during or after a gig. That was how I met another musician, Mike, and how I ended up playing my very first New Zealand live show. Just a few weeks ago I went to a house party in Newtown, where I started to talk to Mike after his band Cumbia Blazera finished their set. We talked about music and life. I told him about my research, and I mentioned that I write music myself -- but that I’m actually a shy bedroom musician who never plays in public. 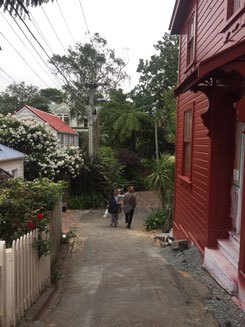 After the gig – walking home from the Moorings | © Katie Rochow Even though I’d never met Mike before, he felt strongly that I should go on stage and share my music before eventually leaving New Zealand. I’ve always found the thought of singing and playing guitar in public pretty frightening, and I was much too nervous to organize an event myself. A few days after I met Mike, though, he got in touch again, informing me that my first gig would take place in the backyard of The Moorings, a historic inner city residence, which is frequently used as a concert venue.

Katie’s first gig | © Katie Rochow Although I was pretty nervous during the performance, this event fell into place in such a magical way. I was filled with happiness and appreciation to be able to play my music for my friends, friends of friends, and the wider “musical family” I’ve made in New Zealand over the past years.