The festive season is a time for music making. Performances often explore themes of reflection and celebration during this time of thankfulness. To welcome 2018, I had the opportunity to perform at the Kammermusiksaal der Berliner Symphoniker.

Reflective panels and irregular surfaces enhance the acoustics | © Imogen Thirlwall “New Year’s Gospel Gala: Donna Brown and Friends” showcased the Golden Gospel Pearls performing gospel standards in the first half. I joined the Soul of Berlin Jazz Orchestra and Singers led by Donna Brown in the second half.

The programme featured “The Abyssinian Mass”, a 2008 jazz mass by trumpet player and composer Wynton Marsalis. The piece was commissioned to commemorate the two hundredth anniversary of Harlem’s Abyssinian Baptist Church – you can find out more in this short video. 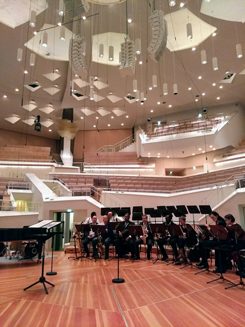 Described as "a picture of the sky", the Kammermusiksaal’s reflective panels and irregular surfaces enhance the acoustics. Pictured here at the sound check are members of the Soul of Berlin Jazz Orchestra. The stage area is surrounded by terraced seating to enhance the intimacy of "music in the middle". | © Imogen Thirlwall For the New Year’s Gala, musical director Donna Brown formed an ensemble of twenty professional singers to perform seven movements of the larger work with the Soul of Berlin Jazz Orchestra.

For a taste, check out this  live recording of the movement “Recessional: The Glory Train” performed by the Jazz at Lincoln Center Orchestra with Wynton Marsalis and Chorale Le Chateau.

Playing trumpet from a young age and through university, I was involved in Wellington’s jazz hive and became a member of the Rodger Fox Big Band. Seeing Wynton Marsalis perform with the New Zealand Symphony Orchestra as part of the 2016 NZ Festival was an exhilarating moment. The featured work, “Swing Symphony”, was commissioned by four major orchestras - one of the partners being the Berliner Philharmonie.

Inspired, I began to explore jazz vocals - specifically, works that required stylistic knowledge of jazz with the vocal range afforded to classically trained singers. I went on to perform the soprano solo for Will Todd’s “Mass in Blue” in both Tauranga and Wellington.

An example from the vocal score for the movement "Anthem". | © Imogen Thirlwall During my first month in Berlin, I saw a post on a Facebook group and jumped at the chance to audition to perform a composition by Marsalis. I did not yet realise the cultural weight of the Berlin Philharmonie as a venue, or foresee how many incredible singers and musicians I would meet through the rehearsal process.

It was an experience I will never forget. Beyond the thrill of performing joyous and difficult music, this opportunity shaped those first few challenging months where I was finding my feet in a new country.

And with the words from the mass, “In this great land of ours, everyone has a place”. This first festive season away from home was one to be supremely thankful for.