Behind the Scenes
Wellington

Even though Wellington claims to have more cafés, bars and restaurants per capita than New York City, a good deal of its thriving (nightlife) culture takes place “behind the scenes”. Organizations such as the Eyegum Music Collective or the Home Economics Initiative – a collaboration of local musicians and artists – regularly host “living room concerts” or public house parties outside the commercial setting of bars and clubs.

During my first weeks of exploring Wellington's music scenes, I met Richard and Georgina, two underground musicians and the organizers of Home Economics, a semi-regular, not-for-profit art and music event which is held in different domestic spaces around Wellington city. By combining home craft, video art, sonic arts and music ranging from gamelan and acoustic folk to experimental and noise, Home Economics transforms a typical Wellington home into a thriving underground performance space.

My first Home Economics event took place in a private flat in the suburb of Newtown, which is situated in the southern part of Wellington. The former working-class suburb is now an attractive neighbourhood for immigrants, young families, students and artists. The event took place in what was once an old factory of some sort, but is now a spacious living area for up to six people. In DIY fashion, the inhabitants rebuilt the rooms themselves and converted them into a cosy, open living space with a communal kitchen, bathroom, toilet and a wood burner for the cold winter days.

House Party | © Katie Rochow The event was spread out across the entire communal space, including one “stage” – which wasn't really a stage or “platform” per se but a ground-level performance area in the kitchen/living room and another one in the entrance hall. Vegetarian food and home-brewed beer were provided by the organizers and inhabitants and served in the kitchen area - everything without any monetary exchange or reward. Guests brought their own drinks and sometimes extra snacks for everyone. I was amazed by the open, friendly and cosy atmosphere, which felt just like a gathering of some friends, enjoying food, drinks and live music in someone’s living room. 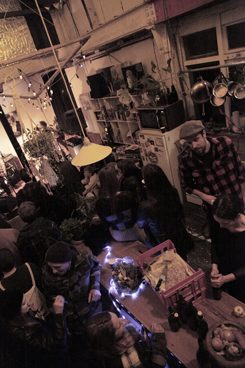 Kitchen | © Katie Rochow By contrast, house parties or “Wohnzimmer Konzerte” in Germany seem to be either a more “private” type of event – a gathering of friends, and friends of friends in someone’s home – or a more “public” stage, in which case the private flat is transformed completely into a music venue where the main stage is in the common area but individual bedrooms are locked and not accessible for the party crowd.

The amalgamation of private and public space at Wellington’s house concerts not only creates a cosy and intimate ambience, but also allows the events to function like little “windows” into the musicians’ creative space, giving me a glimpse of what is going on behind Wellington’s (music) scenes.