In the audience
Berlin

Berlin offers an incredible volume of diverse live musical experiences, and proximity to other European countries opens even more opportunity. In my first visit to Austria, I attended a production of “La Damnation de Faust” in Linz.

Based on a translation of Johann Wolfgang von Goethe’s “Faust: Part I”, the libretto was composed by Hector Berlioz in collaboration with Almire Gandonniere. Premiering in 1846 Paris, it was cancelled before the third show. Berlioz termed the piece a “dramatic legend”, a term he made up, and critics still argue: is it an oratorio, an opera, a symphony, or simply unstageable?


I attended a new co-production by the Landestheater Linz and Opéra de Lyon, with stage direction by David Marton. Sung in French, with spoken dialogue from the four soloists and chorus in both German and English, the production was also surtitled on little screens on the back of the chair in front.

I particularly enjoyed Marton’s use of the adult and children’s choruses for dramatic effect. We are shown Marguerite as a young girl; Faust’s vision of her dancing in a slow circle is repeatedly throughout. Stylised chorus movement reflects Mephistopheles as puppeteer, shown simply through gestures, and building to large-scale mimicking and pantomime. Excerpts from the same production performed late last year in Lyon, give a taste of the music and dramatic direction.

Fondly referred to in the rehearsal room as “clumping”, tight-knit crowds deliver unison spoken text and are used to engulf solo characters throughout the action – this is particularly moving when Marguerite is welcomed into heaven.

The set is striking. The road bridge, unfinished or decayed, stretches over a desert-like backdrop and there is an old pick-up truck. The set is draped with a white cloth to create Marguerite’s bedroom and Faust’s study.

The integration of video deals with some of the challenges: amplification of spoken dialogue, allowing characters to travel through time or location, and showing memory or fantasy with a blurry 50s style home video. Dialogue, for example, occurs within the pick-up truck. Microphones ensure spoken voices are audible and a camera from the dashboard captures close-ups of the characters’ faces, displayed twice to the audience at different magnitude. 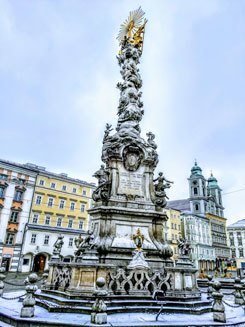 Ein Foto der Marmorsäule, das ich an diesem Tag aus Versehen im Vorbeigehen aufgenommen habe | © Imogen Thirlwall The end of the performance was my favourite part. With Faust in hell and Marguerite in Heaven, Mephistopheles exits the theatre. Live video follows him from the stage and down the many stairs to the theatre exit where the live video is replaced with a pre-recording.

We follow Mephistopheles through the streets of Linz, he boards the tram to the city centre, and as he reaches the grand marble column dedicated to the Holy Trinity, the image fades to black.