“Nothing can beat Wellington on a sunny day” is a popular, if somewhat facile saying which one frequently comes across when living in Wellington. Despite its rather vague meaning, once you’ve lived in Wellington for a little while, it becomes pretty clear what the proverb is all about.

As the country’s “creative capital”, Wellington is home to several high art institutions such as the Royal New Zealand Ballet, the New Zealand Symphony Orchestra, and the national museum Te Papa Tongarewa, as well as to a wealth of art galleries that are dotted around the city. It is no surprise, then, that the city offers numerous “cultural places of inspiration” that captivate, fascinate and are exciting to explore - on sunny as well as rainy days.

However, what makes the city really special to me is its unique natural setting. Wellington is nestled between a natural amphitheatre of forest-clad hills enclosing a vast natural harbour. With mountain vistas and the ocean at my doorstep I discovered my passion for different outdoor pastimes such as surfing, which is rather an unusual leisure activity in the south of Germany. Whether on a chilly or a sunny day, riding, playing around or just watching the waves is relaxing, soothing and exciting at the same time. The ocean is certainly one of my favourite inspirational places in and around Wellington. 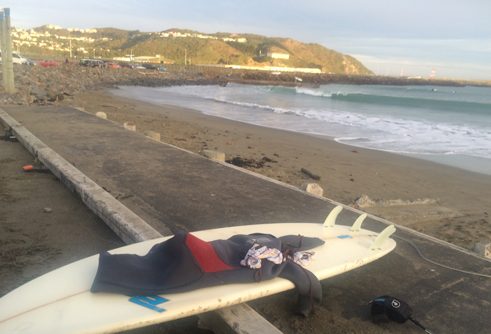 How important the natural surrounding is for Wellington’s music-makers became clear to me when I studied the “personal maps of Wellington” that my respondents drew during interviews. When I asked musicians to tell me about their personal places of inspiration around the city they often struggled to point out specific locations or express their thoughts and opinions about these “creative places” verbally. However, their drawings of Wellington illustrated clearly the significance of urban nature in their everyday lives. 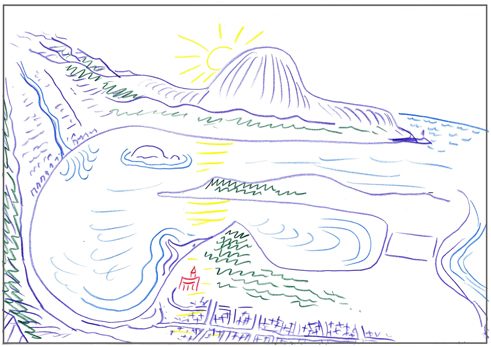 Mental Map of Wellington | © Katie Rochow Most of the maps depicted a vast natural environment, dominated by the great natural harbour, the coastline, the hills and the surrounding native bush. In fact, the most frequently drawn object on the music-makers’ maps was the natural harbour, which often took up half of the entire map. Some of the drawings resembled a postcard of Wellington rather than a map, portraying the vastness and beauty of the city’s natural layout and paying little attention to its rich cultural infrastructure. 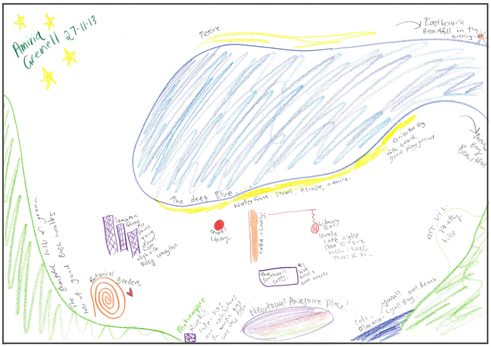 Mental Map of Wellington | © Katie Rochow Some of the mental maps seemed therefore to correspond with my own experiences and feelings towards the city, suggesting that it is not only through the eyes of a “curious foreigner” that Wellington leaves a magical impression. Even after years of living and working in this city, there seems to be an almost endless supply of “inspirational places” from theatres, museums, bars and restaurants to forest, hills, rugged coastline and the ocean, making Wellington an “unbeatable” little capital on a sunny as well as a rainy day.

On my blog urbansoundspace.wordpress.com I have uploaded all the maps the musicians drew during my project.