To explore a new country is to explore its unique history. Like many German cities, Berlin celebrates its contrasts – restored historical buildings and modern architecture; its many sites of remembrance.  And at the core of urban navigation: trains. 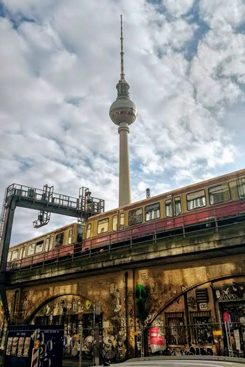 © Imogen Thirlwall With an area almost the size of New Zealand’s Chatham Island, Berlin’s population sits at around 3.5 million – 800,000 less than its pre-WWII population. As a city shaped by its collection of suburbs, each urban pocket offers a distinct vibe, coloured by its inhabitants, its architecture, its history. Positioned at the core of the city centre and a key navigational landmark is East Berlin's iconic Fernsehturm TV tower.


There are two vital resources for exploring Berlin: offline Google maps and the map of Berlin’s railway network. My initial explorations were entirely task-orientated. I took great pleasure in small navigational wins: an excursion to the grocery mecca of a Kaufland supermarket, finding rentable music practice rooms, using ticket machines in Deutsch instead of English. Armed with a seven-day rail pass, it was time to explore more of Germany.

© Imogen Thirlwall With passenger culture attuned to speaking quietly, a sense of peacefulness can be found in making a journey by train. A pleasant soundscape of ambient noise and murmurs. Rural and urban landscapes of exceptional beauty felt with an excess of curiosity. A perfect moment for the album Far Away Passing Trains by Ulrich Schnauss.

© Imogen Thirlwall My favourite stop: the Duisburg-Nord Landschaftspark. The Industrial Heritage Trail has transformed the Ruhr District through the redevelopment of disused industrial areas. Built in 1901 at the height of industrialization, the Thyssen Ironworks in Duisburg–Meiderich closed in 1985.

Now, the site represents an industrial wasteland transformed. The new landscape park showcases “the integration of industrial nature and industrial relics in a unified design to make their unique features and different chronological periods visible and comprehensible”. 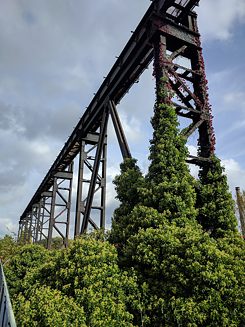 © Imogen Thirlwall With this curiosity I return to Berlin, a place riddled with complex history made visible. Navigating with more certainty each day, the functional practicalities fade as my imagination grows. The names of suburbs, initially a collection of vowels and consonants, gain meaning as I learn more of how they fit within Berlin’s history. I wonder what role they might take in my own. And I begin to connect with this place I'm now calling home.