Long-haul journeys and new beginnings: first dispatches on life in a new language, city and hemisphere.

EMBRACING THE FREEDOM OF UNCERTAINTY

© Imogen Thirlwall Chasing the dream of being a working opera singer in Europe, I landed in Berlin with all of my belongings in a single backpack, no fixed abode, and a plan that covered only the next eight weeks. A time to embrace the freedom of uncertainty – “go hard or go home”, the kiwi motto.

The experience of orientating myself within a European city for the first time has been shaped by small cautions. Breaking the simple habit of “keeping left” on a footpath. Looking both ways, twice, before crossing any intersection. Taking care to precede social interactions with the disclaimer: “Entschuldigung, ich lerne noch Deutsch” (Apologies, I am still learning German).

© Imogen Thirlwall Yet, I’ve also experienced the sheer joy of thousands of voices coming together in shared emotion or conviviality – the collective music-making of large-scale crowds. “Schalalala Hertha” at a Bundesliga football game at the Olympiastadion and “Ein Prosit der Gemütlichkeit” at Oktoberfest in Munich – a toast to Gemütlichkeit, a uniquely German word evoking good cheer, belonging and social acceptance.

The experience of adjusting to a new country, culture and language is warmed by existing connections. Good friends from Wellington, Laurel and Tom, arrived in Germany two years ago. Life in Berlin appealed to them on personal and philosophical levels: a sustainable renting culture, good public transport, decent cycling infrastructure, and much green space within the city core, balancing urban-density and open public spaces. 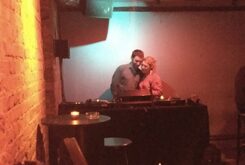 © Imogen Thirlwall Sound Metaphors, a record store, has become central to their lives in Berlin, connecting them with a diverse community of creatives. A highlight of the music scene for Laurel: “Music venues are very aware of how the whole environment can shape a person's experience, and will curate a space and experience to be enjoyable in ways more advanced than trying to get people to spend money at the bar or creating an impression of glamour.”

The first gig I attended in Berlin was a small bar in Kreuzberg where Laurel and Tom play an eclectic mix of records. 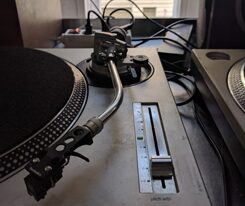 © Imogen Thirlwall “In a city where people often carry very high expectations and energy to parties, I like the idea of disrupting the desire for seamless, danceable DJ sets. It's important to me to play a variety of music, being able to move through jazz and disco, and some leftfield house, rather than perfectly beat matching all night.”

There’s something special in that image: the moment of bringing together two records, with their own rhythm and soundscape, and not yet being sure how the change will align.