The coronavirus has already been under control for three months, counting from the first case of the disease diagnosed on 8 December. Since the closure of Wuhan on January 23, many people have been unable to leave their homes. The whole country looks at Wuhan and tries to understand the situation in the city.

Southern Weekly correspondent Li Muyan quoted Tolstoy: “To live putting death at the back of one’s head and to live in constant awareness that each step brings one closer to death are two completely different states of mind”.

In this series, we seek to explore what has been lost through nine stories. These stories are related to the ideas expressed by phrases such as “the bell tolls”, “speck of dust”, and “life and death”. Of course, not every story is a matter of life and death. Some loss is physiological. Some loss is material. Much loss is spiritual. Spiritual loss may be the most difficult to describe and the most worthwhile to record.

This is the first story.

She first heard about the mysterious pneumonia cases in late December. A WeChat screenshot from the phone of ophthalmologist Li Wenliang was being sent around: seven patients from the South China Seafood Wholesale Market had been diagnosed with a virus similar to SARS. The hospital was less than two kilometres from the seafood market. Face masks quickly became hard to find at the pharmacies in the neighbourhood, and the price increased to twenty yuan. She wasn’t able to acquire medical masks, but she did manage to stockpile forty ordinary masks for her family.

Ye Qi normally worked as a nephrology nurse at the Houhu branch of the Central Hospital. She got up at seven-thirty each morning, road her bike twenty minutes to the hospital, and worked from eight to five with a break from twelve to two. She’d lived like this for four years, and her household of three had saved enough to buy a house. She didn’t have many complaints about her life. But on 16 January, everything changed.

On that day, Ye Qi received notice that she was being transferred to the Respiratory Medicine Intensive Care Unit. The ICU had twelve beds, and they were all occupied. All of the patients were suffering from shortness of breath. One was also suffering from diarrhoea and often needed to be turned over and cleaned. The most important thing was that all of the doctors and nurses were wearing protective suits. Ye Qi had never seen this in her four years as a nurse. The implication was that this kind of pneumonia could be transmitted from person to person. When she returned home, she sought to explain to her parents the seriousness of this matter, but her words had little effect. They refused to wear masks when they went out, and they even visited their hometown for a party.

Four days later, the Houhu branch of the Central Hospital was officially designated as the second treatment facility for the pneumonia outbreak. All other patients were transferred to the Nanjing Road branch. Respiratory Medicine was divided into four sections, and all twenty-four other departments were repurposed as fever wards. Each section could accommodate about forty patients—or more than fifty at peak capacity. As for the protective suits, if you so much as unzipped the zipper, you had to change into a new one. In order to conserve resources, the hospital switched to six-hour shifts. Ye Qi sometimes worked from eight to two during the day and again from eight to two at night. She got used to wearing adult diapers in order to avoid going to the bathroom. She also grew accustomed to the lingering imprints around her eyes left by the protective goggles she had to wear. 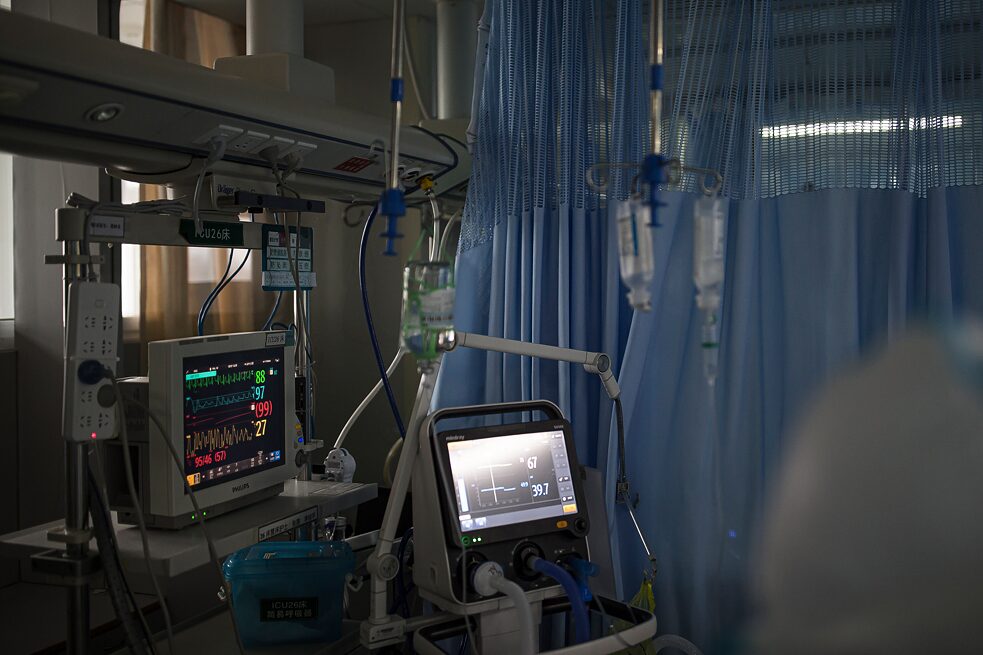 © Goethe-Institut China 2020 There were some difficult matters. Some of the former dialysis patients of the nephrology department send friends to beg Ye Qi for help, asking if a bed couldn’t be found for them. These patients usually came to the hospital for dialysis twice a week. If they went too long without treatment, their lives would be endangered. Now, none of them could find a place to receive dialysis, because all other illnesses were now subordinate to pneumonia. But Ye Qi was only a nurse. There was nothing she could do.

Ye Qi remembers one pneumonia patient in the ICU well. “My family’s finances are not very good”, that patient told her with some trepidation. “Could some of the treatment fees be waived?” At the time, Ye Qi did not know how to answer. On 22 January, when the Special Health Insurance Reimbursement Policy for pneumonia patients was announced, that ICU patient had already been transferred, and Ye Qi didn’t know where. The day before, a pregnant patient from Huanggang at Wuhan No. 7 Hospital had renounced treatment. She died shortly afterwards. Her ICU bills were almost two hundred thousand yuan, and the policy did not come in time to help her. Although both of her lungs were completely white, she died without a definitive diagnosis.

After the city shutdown on the twenty-third, the public transit system was paralysed. Getting to and from work became a problem, especially for the night shifts. Ye Qi’s parents worried about her. Sometimes her father, unable to sleep, would ride his bicycle to the hospital entrance and wait for her shift to end. Then he would ride alongside her back home and cook her favourite dish, Kung Pao Chicken. Later, the citizens of Wuhan organised a volunteer driver team. She met a man in her neighbourhood who began taking her to and from work each day. They didn’t interact much, but he never failed to show up, even after reports emerged of drivers getting sick, including one named He Hui, who did not survive the virus.

In fact, it was not until the news of Li Wenliang’s death came out that Ye Qi truly felt afraid. She did not have work that day. She saw the news on Weibo. The Houhu branch had more than two thousand employees, and she had never met Li Wenliang—or if she had, she hadn’t known him. She just remembered the screenshot that he had sent out. People said that he needed a respirator to keep him alive as soon as he went into the ICU. He’d been in bad shape for a while. “He was so young”, Ye Qi thought. “If I get the virus, maybe the same thing will happen to me.”

None of the people Ye Qi worked with had been infected. But people learned from a public announcement on 1 March that the Central Hospital had suffered grievous losses. Jiang Xueqing, the head of the thyroid and breast surgery department, and Mei Zhongming, the head of the ophthalmology department, had both succumbed to the virus. An unnamed doctor was widely quoted as having said that more than two hundred Central Hospital employees had the virus, including three vice-presidents and one director of nursing. Multiple department heads were receiving extracorporeal life support. The entire orthopaedics department had been “wiped out,” and oncology had “lost almost twenty doctors and nurses”. 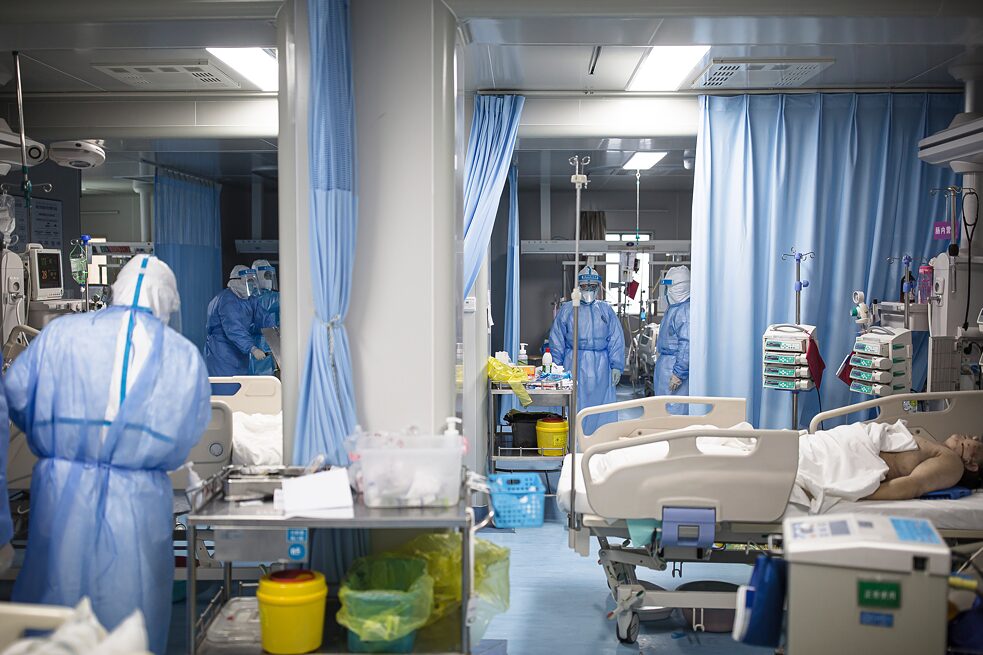 © Goethe-Institut China 2020 Ye Qi didn’t take the rumours to heart. She was an optimistic person who would never shed a tear until a patient’s heart stopped. Many people were panicking due to the epidemic, but Ye Qi had already faced life-and-death situations. The year that she earned her degree in nursing from a professional school in Xiantiao, her father, a road builder, was hit by a car and suffered a cerebral haemorrhage. At the time, Ye Qi was still an intern. She struggled to muster the energy to look for a job as she and her mother took turns visiting her father at the hospital. More than half a year passed like this. Eventually, their limited financial resources and insurance options compelled them to forgo surgical treatment in favour of conservative management. To this day, the blood clot in her father’s brain has not completely cleared up, and he sometimes struggles with his balance while walking. After that, Ye Qi learned to cherish what seems like ordinary life.

In late February, a relief team from Gansu Province took over the ICU. Ye Qi finally had a week off of work. She found herself recalling moments from her childhood. Her father had built roads all over the country. He once returned from a job far away with a teddy bear to give her as a gift. Ye Qi soon discovered that the supermarket across the street sold the exact same teddy bear. Laughing, she showed her father, who said in his ever-serious tone: “The two bears are not the same, because only the one that I carried back has feelings”.

Today, Ye Qi most of all misses her friends from the Jiangxia district of the city. They haven’t seen each other for three months. She hopes that ordinary life will return soon.