“Our initial profits came from working from dawn to dusk. Nobody helps you. In the first year of business, we didn’t earn a cent. For the first half of the year, we had to run a loss in order to get started. The income from the second half of the year barely covered those losses. In the second year, we finally had some small gains, and in the third year, we became profitable.” Last September, when I met Wang Changhua at a park in Xihu District in west Wuhan, he spoke about his business in cautious and diligent terms, but he was clearly proud of his company.

Wang Changhua was born in a village on the outskirts of Wuhan, not far from Tianhe Airport. Despite having little success at farming, his parents had seven children. They were so poor that sometimes there was not enough to eat, and the children often had to shyly beg for five or ten yuan in alms. Wang Changhua, the sixth child in his family, was eager to leave home and find work after he graduated from junior high school. For his first endeavour, he borrowed money from a relative at a high interest rate and started a paper mill in the town, applying dyes to white paper and selling it at the Hanzheng Street market in Wuhan. Hanzheng Street was the first wholesale market for sundries to emerge after the liberalization of the Chinese economy. The 1990s were a golden age for the market, and many entrepreneurs became millionaires. People’s dreams of getting rich were coming true. Wang Changhua got out of bed every morning at four and went to bed at ten each night. He worked sixteen hours per day. Due to the strain caused by this schedule, he started drinking baijiu when he was still a teenager.

In its first year, the paper mill earned four thousand yuan in profit. The second year, it was eight thousand; the third year, twelve. Wang Changhua wasn’t making enough, so in 1992, he decided to become a driver. He stopped drinking and spent thirty-eight thousand yuan on a farm truck that he could use to transport goods and passengers. He could also transport bricks and sand. However, he had never learned to drive. He’d travelled all over on errands for the paper mill, and when he couldn’t get a bunk on the sleeper bus, he liked to sit beside the driver and watch. He went to the Xinhua Bookstore on Wusheng Road and bought a driving manual to teach himself with. After he bought the farm truck, he hired a fourteen-year-old driver sit in the passenger seat and teach him for three days. On the fourth day, he started hauling goods.

Wang Changhua was intelligent and hardworking, but his ambitions were always growing, which made it hard for him to stay focused on one thing. He went back and forth between driving taxis and trucks. He used the money he earned to build two four-story houses in his village, but then he decided that he wanted to plant the fields. The result was the houses were a complete loss. He also owned a fishing lake of about 27,000 square metres in his village, and he built a large house beside it. But because the house was not built to code, it had to be torn down, leading to “another loss of a few million”. 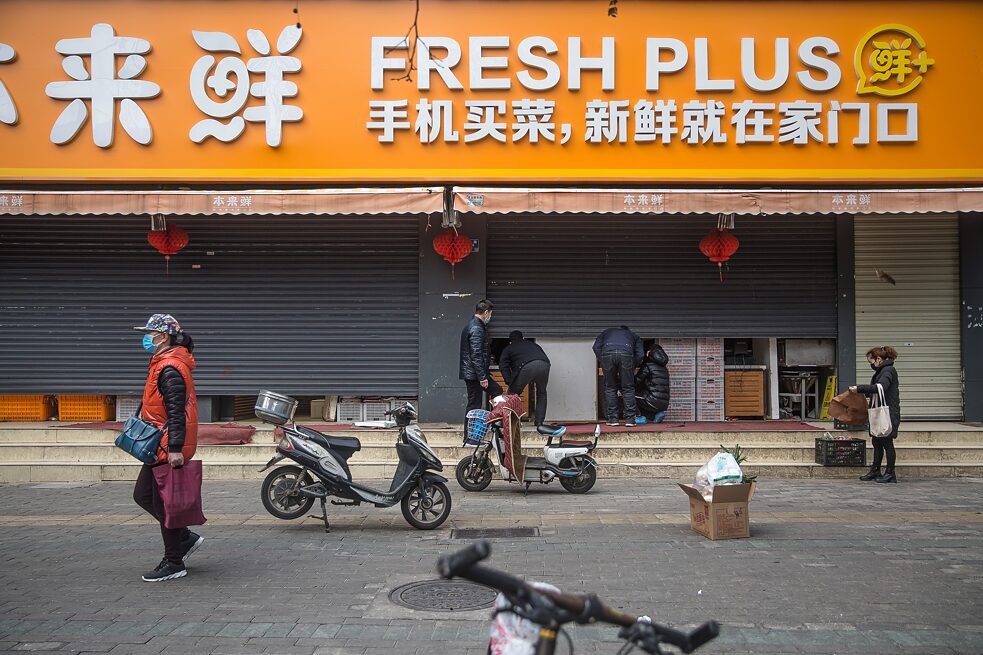 © Goethe-Institut China 2020 In 2003, Wang Changhua returned to Hanzheng Street to start from scratch once again. He decided to go back to driving a truck. He went to the train station at four each morning to pick up goods. He worked during the Spring Festival instead of taking a holiday. During one arduous stretch, he worked three days and nights in a row without sleeping. He would drive at night and deliver the goods. During the days, he collected the goods and took care of his bookkeeping. If he started to doze at the wheel, he would splash water onto his face from a hose or scoop ice out of frozen ponds to wash his face.

Today, he recounts these hard-knock stories over drinks for a laugh. When he has free time, Wang Changhua likes to sing karaoke to relax. His favourite song to sing is “Tears in the Rain”, and he cries when he sings it. After more than a dozen years of hard work, he finally came up in the world, thanks to his distribution business. He owns more than ten houses in Wuhan, and he says, “I earned each of them myself”. He lives in a two-story villa that he bought in 2008 for 390,000 yuan. In May, he bought a 138-square-metre apartment which he still hasn’t decorated at the Jiabo Mall beside Highway 107. His son lives in a 150-square-metre apartment with a tenant parking garage in the city centre. On top of that, he planned divide a large plot of land near Tianhe Airport into lots for a few more houses, with a total area of 400-500 square metres.

But the epidemic has disrupted all of these plans.

Today, Wang Changhua wrestles with regret. On 21 January, his second elder sister was referred to a hospital in Xiaogan because the Wuhan hospitals could not accept any more patients. His mother was not referred to another hospital in time, and so she had to remain at home in Hankou when the city shut down on 23 January. On the 26th, she was having difficulty breathing after several days with a high fever. Wang Changhua was friends with the head of internal medicine at one hospital, and he tried to use this connection to get his mother into the hospital. After more than an hour of trying to reach his friend, the doctor responded to tell him that nothing could be done. Hundreds of people were trying to get into the hospital, and there was no space available. They had to wait their turn. “At present, at least 80,000-100,000 people have been infected”, the doctor said.

At 6:00 p.m. on the evening of the 27th, Wang’s mother was finally admitted to the hospital, but her lungs had already ceased to inflate. Her doctor told Wang that family members could not visit. He would be notified only after she stopped breathing and was cremated. On the 31st, the hospital sent word that she had stopped breathing. 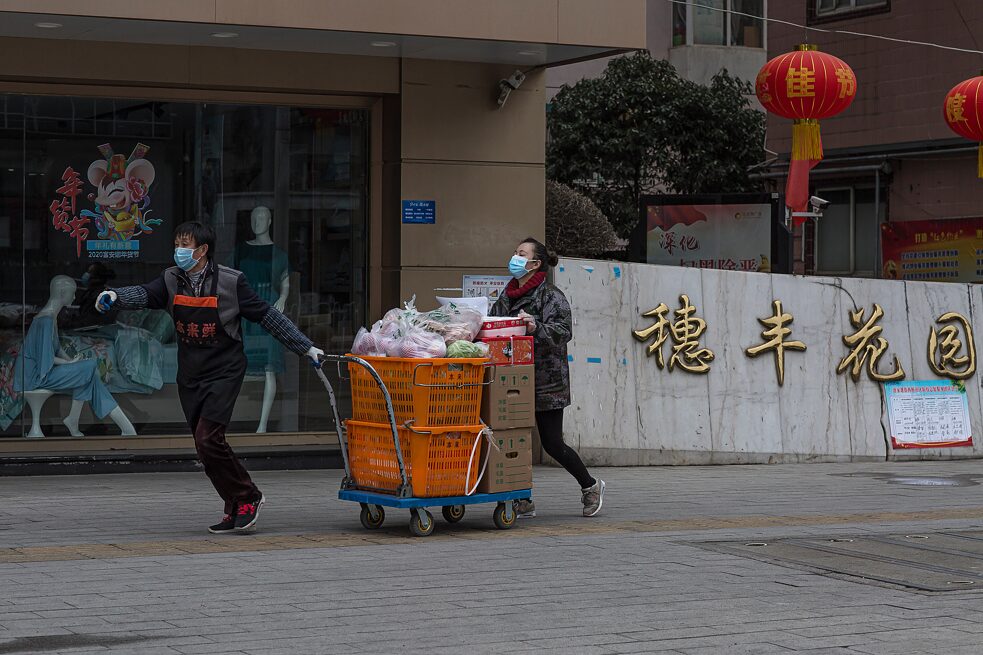 © Goethe-Institut China 2020 Wang Changhua struggled to accept his mother’s death. She had survived the War of Resistance against Japan, fleeing from Hubei to Sichuan and losing her parents along the way, before eventually becoming a teacher in the countryside. According to Wang, she had a lot of common sense and got along well with everybody. “My mother was a great person, and I feel very guilty. There are no words to say. I was an unfilial son.”

As the shutdown stretched into mid-February, Wang Changhua began to suffer from insomnia. His company’s main business was the distribution of goods within the province, and since the whole province was shut down, there was no work to do. The monthly salaries of his employees totalled 400,000 yuan, and the rent for the warehouse and offices was 800,000 more. It was extremely difficult for small and medium-size businesses to apply for loans. Such businesses had few fixed assets to use as collateral, and they also could not open for business, which means that they couldn’t mortgage their operating income, either.

Wuhan has hundreds of distribution companies like Wang’s. The distribution industry at Hanzheng Street market has a long history. In the early 1990s, distribution companies of all sizes received goods from shipping companies at the old Hankou wharf and transferred them to the highways, allowing the wharf to retain its status as the city’s distribution hub for commodities. These companies were mostly family businesses: “one scale, one ruler, one table, one phone, one office, and one luggage transport company” was sufficient to start a company. Their branches were often located in colourful tents between buildings. Next to the tent, there’d be a little street stall selling see-through mah-jongg tiles, poker cards, and dice that the porters and longshoremen used to pass the time. The goods were headed all over the place: to Jiayu, Chibi, Xinyang, Xiangyang, Puyuan, Xiliu, Langfang, Baigou, and Yongqing.

Wang Changhua hopes that the distribution business will make up for lost time after the shutdown ends. Perhaps he can earn in one month what he normally earns in three. But he’s not sure if his company can survive until then. “I have never felt a sense of accomplishment, but I am capable of adapting”—he comforts himself with this thought.