Everybody knew who Li Wenliang was: the ophthalmologist from the Houhu branch of Wuhan Central Hospital who had been reprimanded by the authorities after sending messages about the epidemic to his schoolmates on 30 December. Seven others had also been reprimanded, but Li Wenliang was the first to be interviewed by the news media. That was on 27 January, the fifth day of the Wuhan shutdown. His health had deteriorated, and he had already been transferred to the ICU.

The record of the reprimand, dated 3 January and marked with an official stamp, had later circulated on the internet.

“The Public Safety office hopes that you will positively cooperate, obey the advice of the People’s Police, and to these ends, cease illegal behaviours. Can you do this?”

“We hope that you will calm down and think things over carefully, and we sincerely admonish you: if you stubbornly persist in your ideas, refuse to reform, and continue to engage in illegal behaviours, then you will receive legal punishment! Do you understand?”

After Lin Zi landed in Berlin, she received another message: Li Wenliang was being resuscitated. But less than an hour afterwards, the original conclusion was confirmed: he had died. In addition to anger, Lin Zi felt fear. It was 7 February, and there were only a few known cases of young people dying of the illness in China. Li Wenliang had been only thirty-five years old.

Chinese people in New York, Paris, and London posted plans on Weibo for a memorial for Li Wenliang. Lin Zi decided to plan a similar event in Berlin. Five years ago, she and her boyfriend had opened a design studio together. The epidemic had not reached Berlin yet, and there had been only a few scattered cases of anti-Chinese discrimination. One friend who lived and worked in Munich had been spat upon one night by a group of people. But many other people treated their Chinese neighbours with friendliness. A friend who lived in Dusseldorf had been quarantined and was receiving box meals each day from the Red Cross. The Red Cross staff wrote messages on the boxes: drawings of flowers or little suns, or neatly written Chinese characters that said: “we hope you enjoy your meal”. 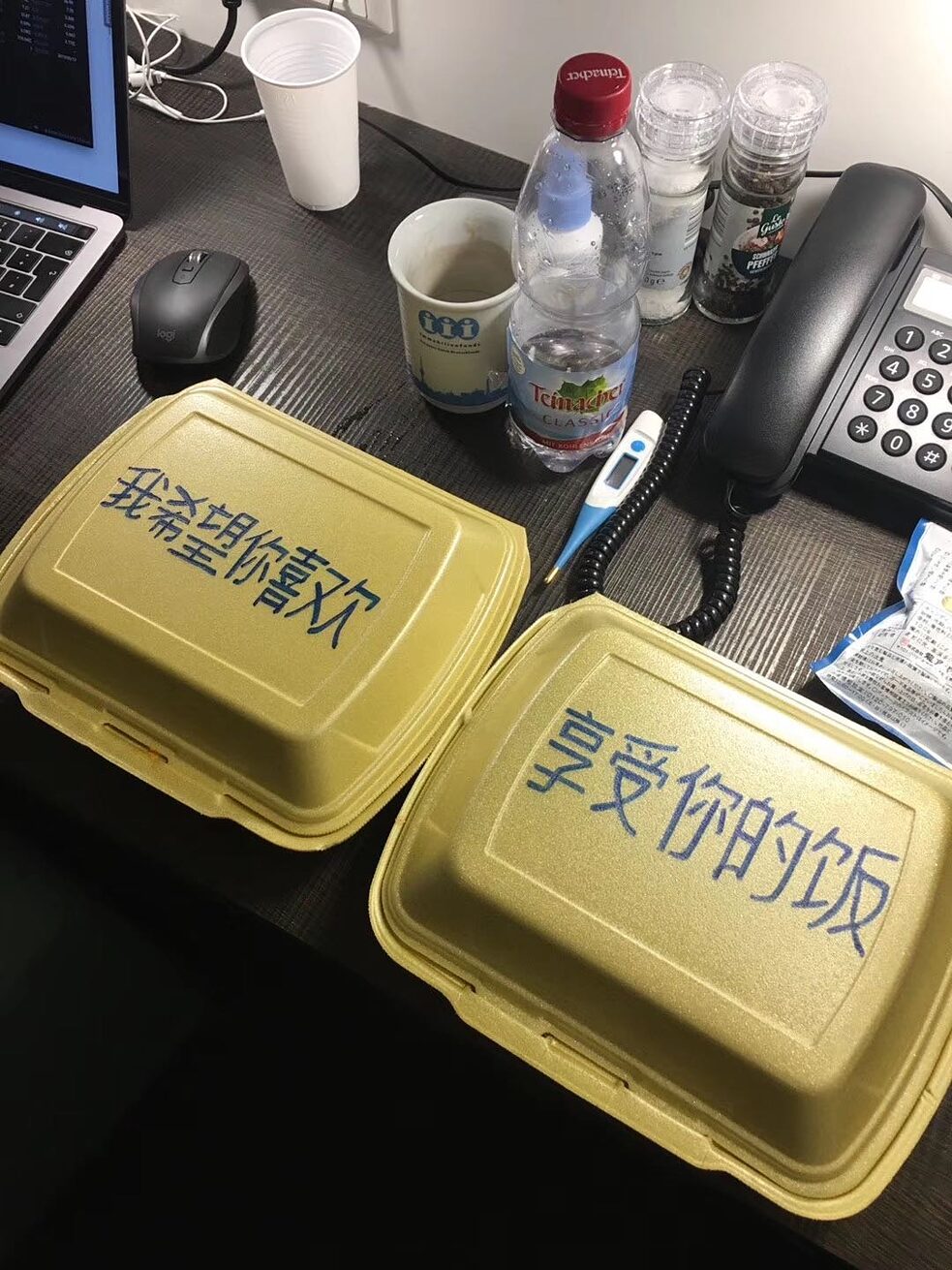 © Goethe-Institut China 2020 At 1:44 in the afternoon on 8 February, two people posted information about the memorial on Weibo. Another Chinese couple got involved in the organization of the event. The time was set for 5:30 to 7:00 the following evening, and the location was the Brandenburg Gate. In the Weibo post, the record of the reprimand was revised: the “I can” and “I understand” were replaced with “I cannot” and “I do not understand”. Another line that Li Wenliang once wrote on Weibo was added: “a healthy society should have more than one voice”.

Lin Zi worried that it would be difficult to get official approval for the event because it was the weekend. She called the police department. To her surprise, everything went smoothly. “Doctor Li Wenliang? Yes, I know about him. Go ahead, we will send police to protect you”, said the person who answered the phone.

However, five or six hours after the event was posted on Weibo, other users began leaving comments saying that the memorial planners were an anti-Party organization that supported independence for Hong Kong. The commenters exhorted people to stay away from the memorial. Their proof came from Facebook: someone with the same name as one of the organizers had supported the Hong Kong “anti-extradition” movement[d1] . Lin Zi stayed up until four in the morning on 9 February in order to respond right away to each comment and direct message. She noticed that one of the critical Weibo accounts, Chinese Information Platform for Germany, had only fifty followers. This account had made three posts in a row attacking the memorial, each one a photograph of a long text, and circulated them in several WeChat groups. But now the account had been deleted. There were also strangers sending her direct messages, asking her to print out the farewell poem that she had written and bring it to the event. The poem read: “Nothing is more harmful than the suppression of speech. May the days ahead bring us closer to freedom.”

On 9 February, Lin Zi slept until noon and woke up to more than ten missed calls. The woman in the couple who had begun to contribute to the event decided to drop out after being pressured to do so by her parents. Another Chinese woman who had immigrated to Germany at the age of ten had sent her apologies. She said she could not attend, and her German boyfriend would go in her place. 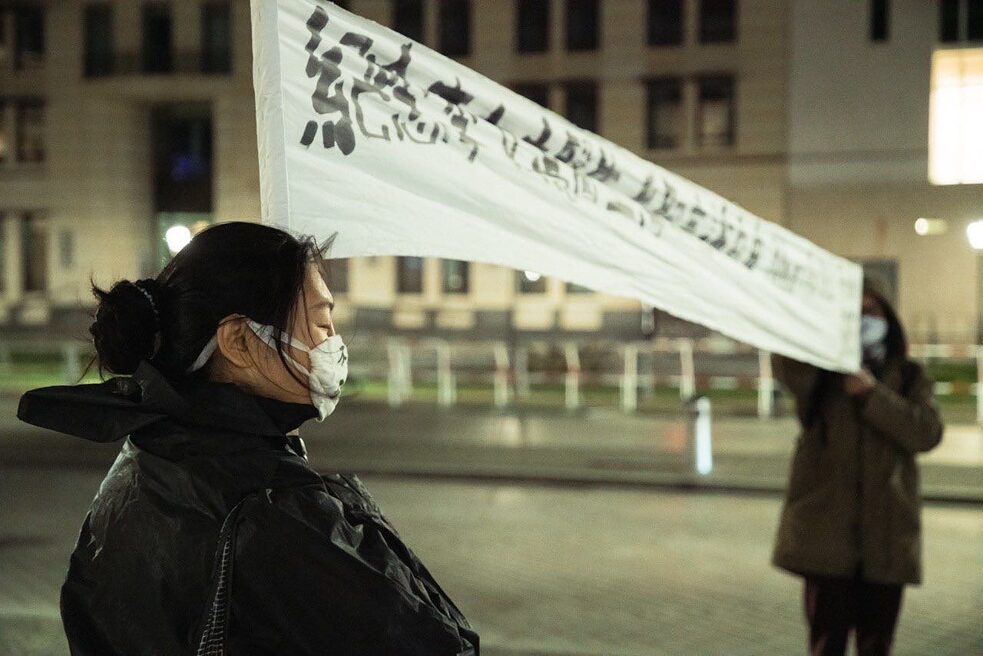 © Goethe-Institut China 2020 In the afternoon, Lin Zi went to her studio to print the farewell poem, as well as bios of Dr. Li in English and German. She went from there to the supermarket, where she purchased five candles and four bouquets of white, yellow, and violet tulips. It was 5:30 when she arrived by taxi at the Brandenburg Gate. She laid out the flowers with a photograph and lit the candles. People wearing facemasks walked over from various parts of the plaza. Lin Zi realized that several people had arrived before she had. There were more than thirty mourners in total.

Nobody knew each other, and there was not much conversation. Each person made their own contribution. They had brought all kinds of bouquets: white chrysanthemums for mourning, but also bright red birds of paradise. Someone had brought beer and fried chicken from Risa, which Li Wenliang loved to eat, according to his Weibo. Someone else contributed the lyrics to the song “Bidding Farewell”: “Outside the long corridor / along the ancient road / the green grass seemed to connect with the sky.” One man pulled a sheet of A4 paper from his pocket and placed on the ground. The Chinese characters for “freedom of speech” were written on it. Two other attendees produced a homemade banner made from wooden sticks and white gauze. The banner said, “Remember Doctor Li”. When a strong wind kicked up, everybody knelt down to shield the trembling flames of the candles.

A German man approached Lin Zi and said, “If Li Wenliang was the first person to realize that it was an epidemic, then why did he get sick?” Lin Zi did not know how to answer. Li Wenliang began to feel ill on 10 January. At the time, the doctors were still unsure whether or not the mysterious illness could be transmitted from person to person. The doctors had interacted without masks on with several patients who were not yet feverish.

At 6:30, a man quietly left the group and began walking around the perimeter of the plaza, blowing a whistle. Others among the group standing around the candles also took out whistles. Some opened a smartphone app that they had just downloaded called Whistle Sounds. The sound was drawn-out and sorrowful, expressing more than words could say. After another half hour, the group dispersed. At 8:30, Lin Zi deleted the information about the memorial from her Weibo account. By that point, more than 101 users had reposted it, and it’d been viewed more than 50,000 times. 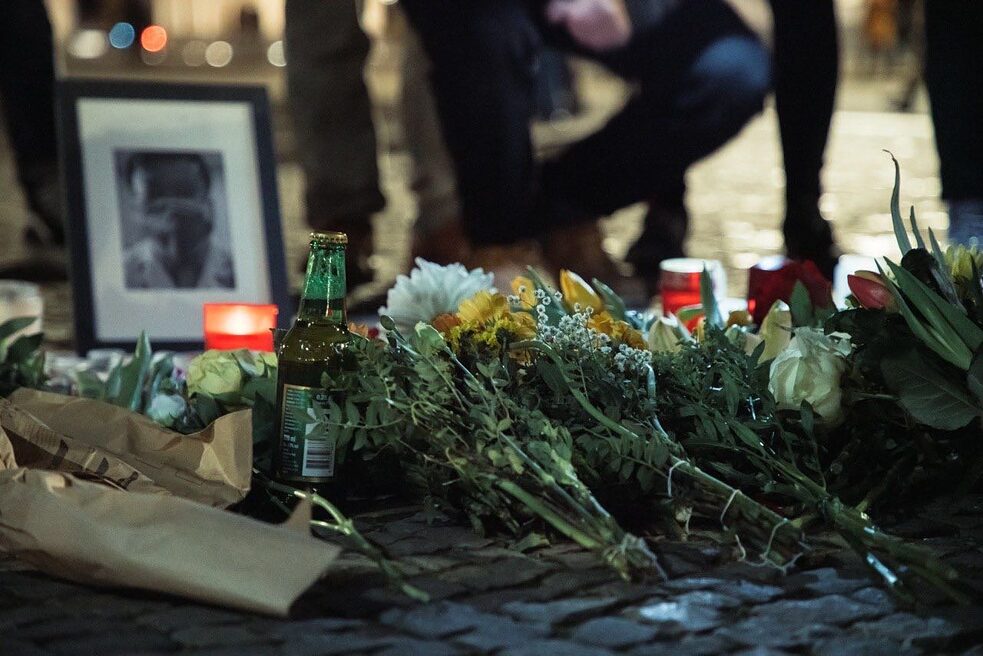 © Goethe-Institut China 2020 A week later marked Li Wenliang’s “touqi”, according to Chinese tradition an important day of remembrance of the dead. Lin Zi placed the photograph and the candles from the memorial on the corner by her studio along with a bouquet of lilies. Of course, there was also the placard with the quotation: “A healthy society should have more than one voice”. A child passing by read the German words aloud: “Eine gesunde Gesellschaft sollte mehr als nur eine Stimme haben”. He asked his mother: who was this person, and what do these words mean?