Zhang Hong died in the car. The car was stopped in front of the hospital. Xie Qing could not understand why the emergency room was on the fourth floor. He ran upstairs to ask the doctor if dialysis was possible and received the same answer as before: they had to wait. When he got back downstairs, Zhang Hong’s hands were already cold.

Zhang Hong had been fine just a week earlier. She was a thirty-seven-year-old consultant and the mother of a five-year-old girl. After being diagnosed with kidney failure in October 2018, she had to go to Renmin Hospital of Wuhan University two or three times per week for dialysis. As her condition improved, the visits were reduced to only twice per week.

The last time Zhang Hong received dialysis was on 3 February. On the morning of 6 February, they returned to Renmin Hospital, but the doctor said that they had to get a CT scan first. The CT scan showed shadows on Zhang Hong’s lungs. In fact, this was not uncommon for dialysis patients: if the water accumulated in the kidneys did not drain cleanly, it was possible for it to contaminate the lungs. But the doctor was concerned that Zhang Hong might have COVID-19. Xie Qing recalls that Zhang Hong had suffered from a bad cough in December, but the cough had cleared up after a course of antibiotics. He was sure that she did not have pneumonia, but he could not convince the doctor. A doctor named Lü told Xie Qing that Renmin Hospital would submit a list of names to the Municipal Hemodialysis Centre, and they should wait to be contacted. The doctor also suggested that Xie Qing return to their community centre for a nucleic acid test.

The following day, 7 February, there was still no car. Xie Qing called the community centre twice. “We cannot delay any longer”, he said. “She has already gone four days without dialysis”. The person he spoke to gave him the phone number for the director of the community centre, Mr. Feng. Mr. Feng told him: yes, yes, I’ll arrange it right away. But no car came that afternoon, either.

On 8 February, Xie Qing found the list of designated hospitals for coronavirus patients with special conditions that the Wuhan Municipal Health Commission had published three days earlier. The list included six hospitals for patients who needed hemodialysis: Guanggu branch of No. 3 Hospital, West branch of Puai Hospital, Hankou Hospital, Wuchang Hospital, No. 5 Hospital, and No. 9 Hospital. 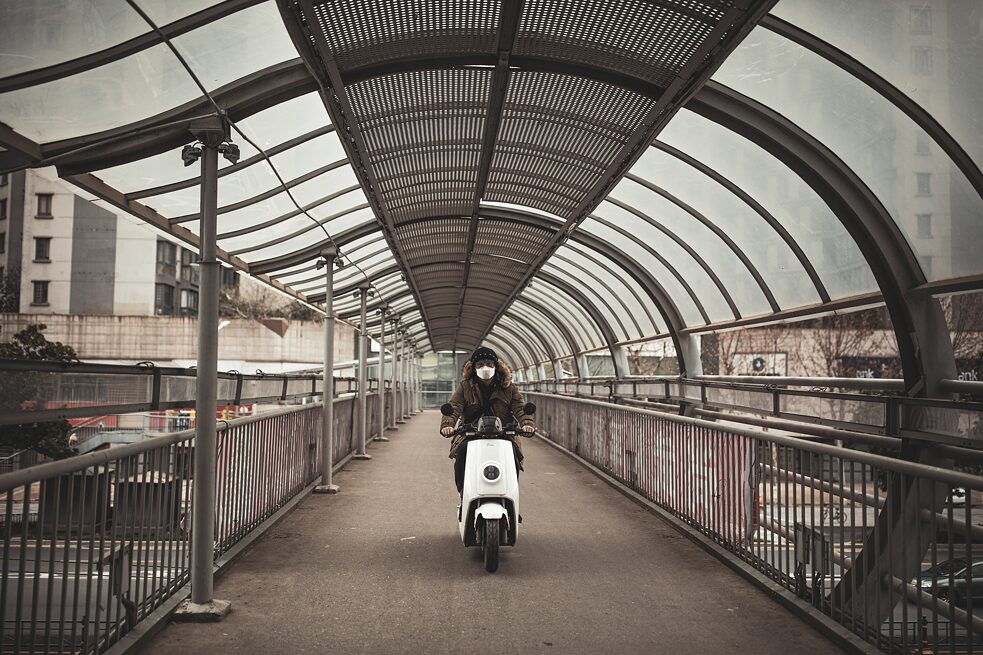 © Goethe-Institut China 2020
The closest to their home were Wuchang Hospital and No. 9 Hospital. Zhang Hong wanted to try No. 9 Hospital first. She thought that there might be fewer people there and less risk of infection because the hospital was less famous. When they arrived at No. 9 Hospital, they were told that the dialysis department had already been closed for improvements and could not admit patients. At Wuchang Hospital, the nurse at the front desk simply said, “We don’t do that here”. Zhang Hong lost her temper. She pulled out her phone with the list from the Health Commission on it and said, “Look at this document! You shouldn’t refuse us”. The nurse went to find a doctor named Xiong. Doctor Xiong explained that Wuchang Hospital had to receive a list of names from the Municipal Hemodialysis Centre before giving patients treatment: “We have not received your name”.

Xie Qing remembered that Doctor Lü at Renmin Hospital had said that he would put their name on the list. He called Doctor Lü. “I speak to the higher-ups every two hours”, Doctor Lü said. “There’s another patient with the same problem, and they have already found another place to receive dialysis”. Xie Qing asked for the other patient’s contact information, but Doctor Lü said that he did not have it.

On 9 February, Zhang Hong had gone six days without dialysis. Her whole body ached, she couldn’t breathe well, and she couldn’t sleep.

Xie Qing searched for online for the phone number of the Municipal Hemodialysis Centre, but he could not find it. He called each of the other four hospitals on the list. Either nobody answered, or somebody told him that they could not do dialysis without first receiving notice from the Municipal Hemodialysis Centre. Xie Qing dialled 120 for information, and the operator told him that they had never heard of this centre. “You can try these four numbers”, they said, and provided Xie Qing with the numbers for hospitals that he had already called countless times.

Xie Qing was frantic. He began calling every number he could think of: 110 (Public Safety Department), 12345 (City Government Hotline), 12320 (Municipal Health Commission). He even called the citizen hotline of the local television station. The responses he got were all similar: yes, we will report your situation to our superiors.

On 9 February, Zhang Hong had gone six days without dialysis. Her whole body ached, she couldn’t breathe well, and she couldn’t sleep. She needed Xie Qing to help her walk to the bathroom. “Maybe we should figure out how to get a nucleic acid test”, she said. “It seems that no condition matters except pneumonia right now. If I can get into the hospital for pneumonia, then perhaps I can get dialysis”.

On 9 and 10 February, Xie Qing went to Wuchang Hospital twice and received the same answer both times: wait to be contacted by the authorities. When he returned home, Zhang Hong was still lying in bed. Xie Qing continued to look for someone who could help. He asked everywhere about private hospitals that could perform dialysis, but it became clear that the private hospitals had also been commandeered by the government to treat pneumonia. He contacted a leader of his work unit and asked him if he had connections at Zhongnan Hospital and Renmin Hospital. He also contacted Director Qiu at Renmin Hospital and asked him if hemodialysis could be replaced with peritoneal dialysis. Peritoneal dialysis could be performed at home with a tube inserted abdominally, but a surgery had to be performed in a hospital to make it possible. Director Qiu told him that it could not be done before a nucleic acid test to rule out pneumonia.

On 11 February, the leader from Xie Qing’s work unit contacted him to say: “Neither Zhongnan Hospital nor Renmin Hospital can handle your wife’s problem. The people who used to be able to make things happen are no longer able to. Zhongnan Hospital can provide nucleic acid tests with fast results, so you can try going there”. The community centre commission also finally called to say, get ready, we’ll come pick you up this afternoon and take you to the quarantine location. 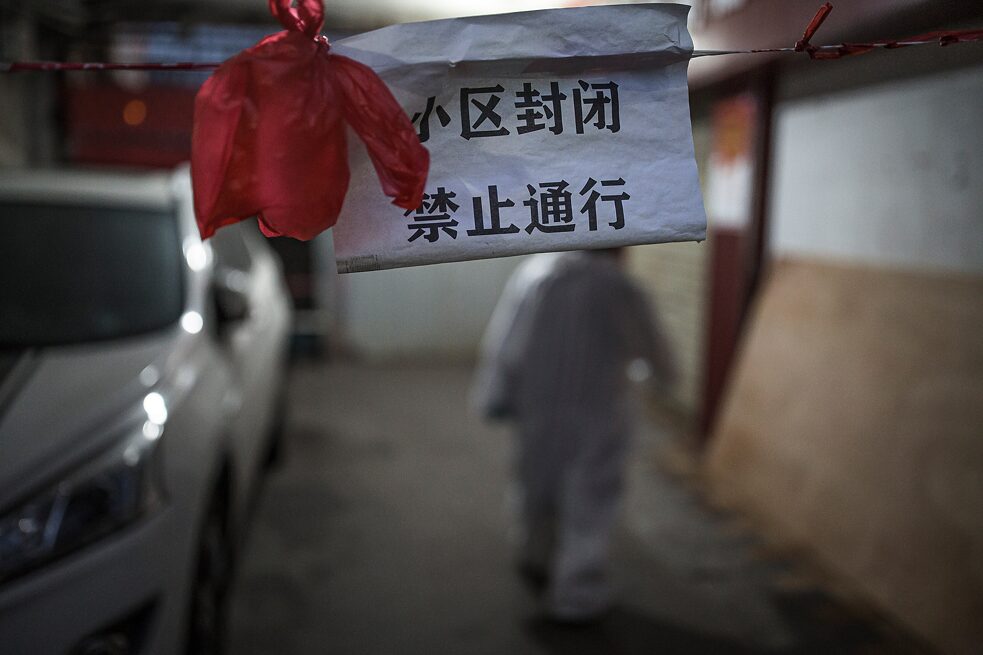 © Goethe-Institut China 2020 Xie Qing was thrilled. He packed a bag with Zhang Hong’s clothing, shoes, and medications. But the community centre car once again failed to show up in the afternoon. Xie Qing thought: I can’t wait any longer. He drove Zhang Hong to Zhongnan Hospital himself to get tested for COVID-19.

The two of them woke at eight in the morning on 12 February to go to the hospital for the test results. They were told that they would have to wait until two or three in the afternoon. Xie Qing took Zhang Hong back to Renmin Hospital. They sat in the dialysis room and waited, hoping that Zhang Hong could begin dialysis as soon as they received a negative test result. Sixty percent of the dialysis machines in the room were unoccupied. But the test result did not come, so Zhang Hong could not use these machines. Her pain was almost unbearable; she was biting her own tongue in order to stay conscious. When a doctor or nurse walked by wearing a protective suit, she angrily said: “The protective suit that you’re wearing might have been donated by my classmate and me, did you know that?” Meng Zhi, a university classmate of Zhang Hong’s, was one of the founders of a donation program organized by Chinese people in Japan that had earned attention for using a slogan of classical Chinese verse: “Are we not dressed for battle? We will share your fight!”

A little after two in the afternoon, the result came from Zhongyang Hospital: negative. Xie Qing immediately went to find Director Qiu. But Director Qiu’s story had changed again. “We cannot accept any one-off nucleic acid test results here”, he said. “Nucleic acid tests can produce false negatives. You must take the test at least twice”. He also said that that they would need a CT scan without lung shadows. Xie Qing begged him to reconsider, but he said, “Renmin Hospital is no longer under the control of Renmin Hospital”.

Just one day earlier, the Provincial Centre for Disease Control and Prevention had held a press conference where Xu Shunqing, Associate Dean of the Public Health Institute of Huazhong University of Science and Technology, had said that nucleic acid tests produce a certain amount of false negatives.

Around then, Zhang Hong’s elder sister called to say that she had made contact with the Guanggu branch of No. 3 Hospital and confirmed that Zhang Hong could go there for dialysis. Xie Qing asked his father to sit in the back seat with Zhang Hong and feed her candy when she lost consciousness. He can’t remember how many red lights he ran and how much he exceeded the speed limit as he drove from Zhongnan Hospital to the Guanggu branch of No. 3 Hospital. He just wanted to save his wife.

They arrived at the hospital. The emergency room was on the fourth floor. He ran upstairs to ask the doctor if dialysis was possible and received the same answer as before: they had to wait. When he got back downstairs, Zhang Hong’s hands were already cold.

Xie Qing didn’t know how to explain to his five-year-old daughter where her mother went, so he told her that she had to go on a business trip overseas. They don’t have Wi-Fi there, and the phones don’t work well either, he said. His daughter and mother waited at home while Xie Qing and his father were quarantined separately at a hotel. When he went through Zhang Hong’s things, he found out that she had been donating twenty yuan per month to a charitable organization since 2015. He discovered a referral form in her medical files, but he didn’t know how it got there or when. Zhang Hong had been in a dialysis patient group, and he learned from them that other Renmin Hospital patients had found places to receive treatment.

Liu Lutian is a Journalist from Wuhan, Hubei.