As early as January 26, both of Wong Hongfa’s parents were exhibiting the diagnostic symptoms of the coronavirus: cough, fever of around 38°C, weakness, and difficulty breathing. The CT scan performed by Wuhan Central Hospital showed shadowy spots of “ground glass”, as well as blood oxygen saturation levels below 90 per cent.

This was the fourth day of the citywide lockdown. Across the country, 2,744 new cases were confirmed, with half of them from Hubei province alone. Wuhan’s designated coronavirus hospitals had already released two rounds of extra beds—approximately 4,000 beds in total—but even those filled up quickly. The media reported that an additional 6,000 beds were being made available, beginning the next day.

None, in the end, were assigned to Wong Hongfa’s parents. In the six days between January 26 and February 2, Wong Hongfa did everything he could to try and secure two hospital beds. He even became friends with the District Supervisor, Mr. Huang, after regularly arguing with him while requesting help. For Wong Hongfa, each day began with making phone calls, and each day ended with making more phone calls. He had completely covered a piece of paper with various phone numbers and contact information: the District Epidemic Prevention Headquarters, the District Health Committee, the Municipal Health Committee, the Mayor’s Hotline. Mr. Huang told him that the district committees didn’t know which hospitals offered nucleic acid testing, or which ones had available hospital beds; even they simply had to wait for notices from the municipal committee. While Wong Hongfa waited, he searched high and low for a place that was selling intravenous immunoglobulin, a blood product that can help the human body fight off infections. In Wuhan, the price of a single bottle had already increased from 600 RMB to 800 RMB. Even at that mark-up, it was difficult to find.

After hundreds of phone calls every day, Wong Hongfa had trouble keeping track of exactly who had given him what information. What did stick with him, however, was the way in which those answering his calls sounded indistinguishable from automated recordings. “Has nucleic acid testing been done? If not, then please speak to your community committee.” “We have your information, and we will pass it on to the relevant authorities.” “Our department functions are limited to those listed on the document. They do not include the issue you are asking about.”

Wong Hongfa was at a loss. Why were those patients under 70, or those whose entire families had been confirmed carriers, or even much younger patients, able to get on priority treatment lists, when his own elderly father, who had served with the Chinese Red Army, was not? He also didn’t understand why every department required completed CT scans and nucleic acid testing in order to determine whether a patient was on their last legs. If they only came and took a look, he thought, his parents’ conditions would be obvious. 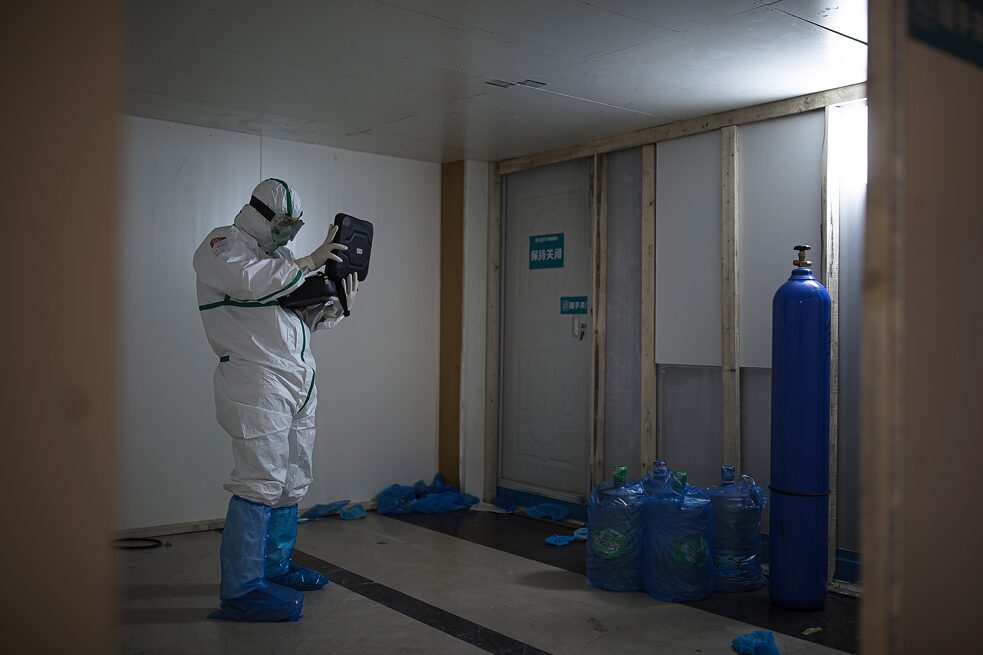 © Goethe-Institut China 2020 In the morning of February 3, his parents had finally been selected to receive the community’s collective nucleic acid testing. But they would have to wait two days for the results. Around 8 p.m. on the same day, Wong Hongfa’s father fell unconscious during IV infusion at Wuhan Central Hospital, and required emergency rescue efforts. Wong Hongfa wrote a message asking for help, and posted it under Weibo’s coronavirus topic page.

In the middle of the night on February 4, the city of Wuhan began setting up its first makeshift hospital, converted from a gymnasium in Hongshan District. That night it dropped to 6°C, as some 200 volunteers were called to the gymnasium to assemble 1,000 beds. At dawn, the volunteers were sent to the Wuhan Exhibition Centre, where they continued assembling 1,000 more beds.

In the morning of February 5, Wong Hongfa learned through the news that the Municipal Prevention and Control Command Centre had announced that all confirmed coronavirus patients would be admitted for treatment by midnight of the same day. In the afternoon, both of his parents received confirmation of their carrier status. “Is it possible that we’ll be checked in by midnight?” Many people had their doubts.

Rows of beds were lined up one after another. Electric blankets as well as basic food and drink was provided. But there was no medical equipment or supplies, not even fever reducer tablets.

At 5 a.m. on February 6, the Community Committee finally contacted Wong Hongfa, notifying him that his parents would be admitted into the hospital. They weren’t clear, however, on when transportation could be arranged, and which hospital his parents would be sent to. The three of them arrived at the pickup location early and waited. To prevent transmission, they avoided standing close together. Instead, they stood far apart, looking silently at one another across the space. For both of Wong Hongfa’s parents, breathing was becoming increasingly laboured, and they could no longer speak full sentences.

At 6:47 a.m., a green taxi and a small white truck appeared. Wong Hongfa’s parents boarded the truck, which was packed with people. Only when they were dropped off did they realize that they were being admitted to the makeshift hospital. According to a previous public announcement, the makeshift hospital was meant to accept only those confirmed carriers displaying mild symptoms. The layout and services were spartan. Rows of beds were lined up one after another. Electric blankets as well as basic food and drink was provided. But there was no medical equipment or supplies, not even fever reducer tablets. The staff was responsible only for registering patients, and only a few medical personnel were standing by. 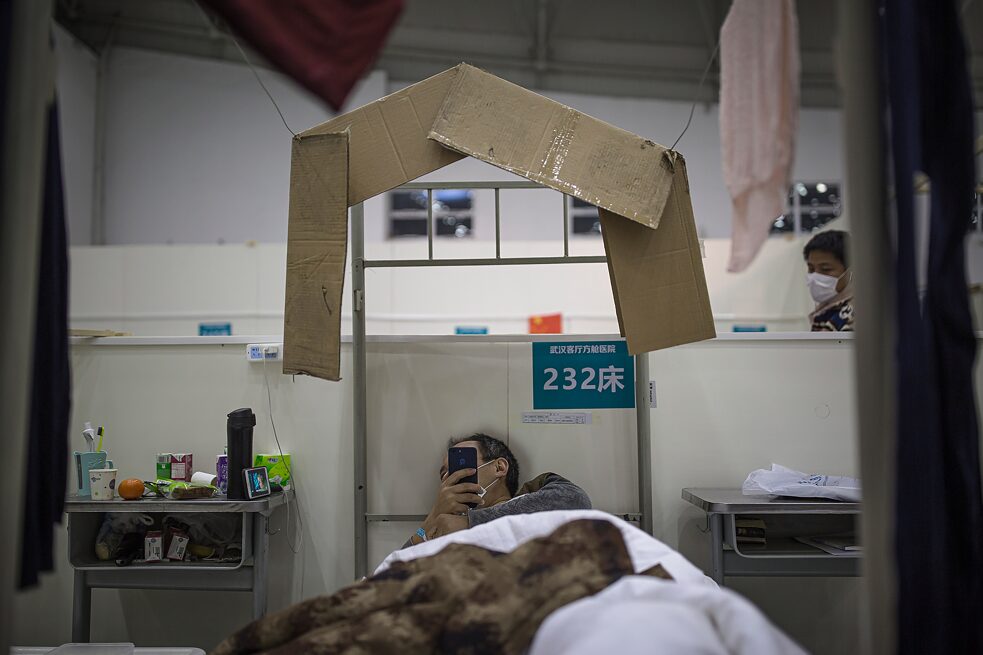 © Goethe-Institut China 2020 Wong Hongfa was deeply worried. It would have been better to keep his parents at home, instead of moving them to the makeshift hospital, effectively cutting them off from IVs, oxygen, and medicine. He even suspected that it was simply to fulfil the instructions of the Prevention and Control Command Centre—to “admit all confirmed patients into hospitals”—that the Community Committee had decided to send even severely symptomatic patients like his parents to the makeshift hospital.

In the night, Wong Hongfa’s father developed a fever of 40°C, and his body went into shock. Wong Hongfa was teetering on the brink of emotional collapse. He hadn’t slept in over forty hours, but he had no choice but to continue making phone calls. At 9:30 p.m., the news broke of Li Wenliang’s death. The ophthalmologist and early whistle-blower of the coronavirus had died at Wuhan Central Hospital, after failed resuscitation attempts. Two hours later, Wong Hongfa’s father was finally sent to Wuhan Jinyintan Hospital, the very first hospital designated for exclusive treatment of coronavirus patients. After hours of emergency resuscitation, Wong Hongfa’s father was finally stabilized around 1 a.m. He was then transferred to the seventh floor for coronavirus treatment.

In the afternoon of February 8, Wong Hongfa’s mother was at last admitted into Wuhan Union Hospital. This was the fifteenth day of the first month in the new lunar year, the day of the Lantern Festival holiday. It is a day meant for family gatherings and reunions, but Wong Hongfa was home alone. On TV, a special Lantern Festival program included a song about defeating the coronavirus. The performers sang: “What have you seen? What will you remember? What has moved you? And why do you lie awake in the night?”

Wong Hongfa didn’t finish watching the whole program. It had been over 60 hours since he’d slept. On Weibo, a video caught his eye: On the balcony of a tall apartment building, a girl was sobbing and banging a gong.

“Someone, please hurry! My mom isn’t going to make it! Someone, please come and help us! There’s nothing else I can do!” The girl was crying out in Wuhan dialect.