The city of Huanggang, in Yingshan County, is located 159 kilometres from Wuhan, in the Dabie Mountains, the eastern part of Hubei Province. The county is made up of eight towns and more than three hundred villages. Last year, the provincial government approved the removal of Yingshan from a list of impoverished counties. Four hundred thousand people live in the county, and at the peak of the coronavirus, there were more than sixty diagnosed cases of COVID-19 in Yingshan.

Zhang Li was born in the town of Wenquan. She was a third-year high school teacher with a monthly salary of three thousand yuan. One month ago, she drew an advance of several tens of thousands of yuan against her salary. Working together with three other volunteers and four drivers, she brought 60000 face masks, 210 protective suits, 4400 safety goggles, 13 oxygen machines, 10 oximeters, 2 ventilators, and 32 tons of vegetables into Yingshan County. There were other assorted items in her haul: 1080 eggs, 910 cases of instant noodles, 1000 packs of diapers, and 38 bouquets of flowers for welcoming relief teams.

They originally had just wanted to provide face masks to their families to prepare for the epidemic. At midnight on 24 January, fourteen hours after the shutdown of Wuhan, Huanggang announced its own shutdown. It was the first day of the lunar New Year. Nobody went out to pay traditional New Year’s visits. Instead, every door was shut tight, and the lines in front of the pharmacies went down the block. A friend who was organizing donations for the hospital sent a QR code to Zhang Li’s phone. But money didn’t matter, because face masks were already completely sold out. The news spread quickly that there were some left in the town of Pengchan, Xiantao. Zhang Li got into her car and drove to the highway, but she soon discovered that she couldn’t get anywhere without a travel pass from the county command centre. She gathered together 20,000 yuan for the travel pass, and that very night, she brought back 12000 face masks, all of which she delivered to the hospital.

Before long, she’d spent all her money. So Zhang Li shifted her focus to helping hospitals transport supplies. There were fourteen hospitals in Yingshan County: three in the county seat and one each in eleven towns. Zhang Li called the county government and got a contact list for each hospital. She had to visit three different offices to cut through the red tape. First, she went to the hospital to get a letter; then, to the anti-epidemic command centre to get it stamped; finally, she went to the traffic police to register her car’s information. The drive between the command centre and the traffic police ordinarily only took three minutes, but because of road closures, the trip took twenty minutes. This delay suggested that getting to the county seat would probably take a few hours.

After she returned from Pengchang, Zhang Li’s daily routine changed. As soon as she got out of bed, she picked up her phone and sent the list of equipment requests from the hospital to various WeChat groups. She communicated with a variety of strangers who wanted to donate money or who were willing to provide supplies. At midday, she went to the county seat to collect the goods, and in the afternoon, she distributed them throughout the county. She returned home around ten p.m., and then she catalogued the day’s goods and donations. In addition to all that, she still had to supervise the schoolwork of her class of third-year high school students. These students were expected to take the extremely important college entrance examination in June. Zhang Li herself had signed up for an advanced learning seminar, and so she was also taking online classes. 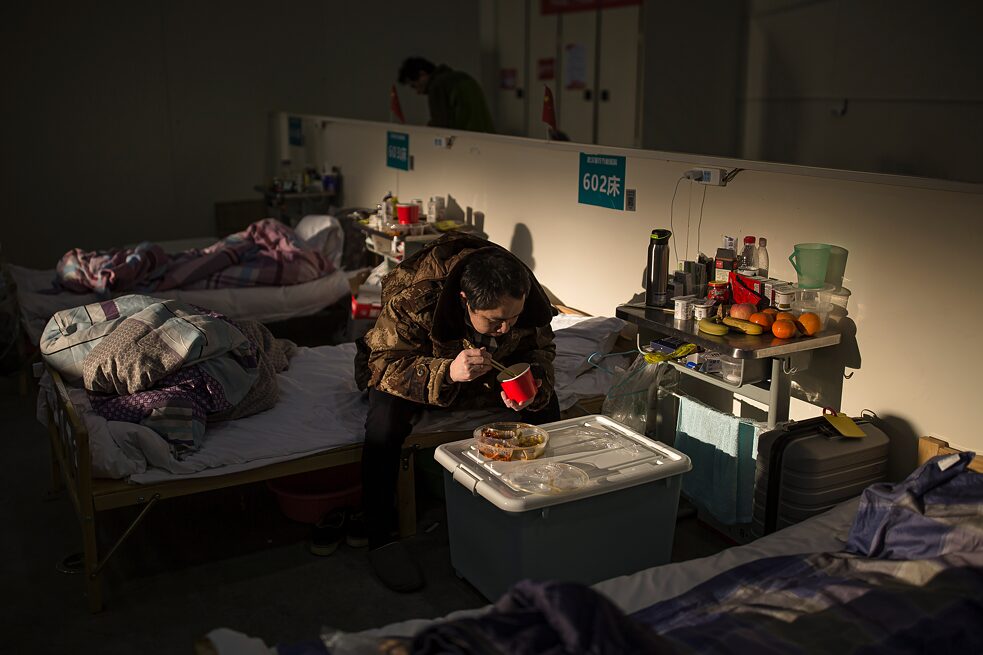 © Goethe-Institut China 2020 Getting supplies was not easy. Eight or nine times out of ten, Zhang Li’s suppliers didn’t keep their promises. At first, a lot of donors thought that the situation in Yingshan County was much less urgent than in Wuhan—the proverbial “blind spot beneath the lamp”; later, as profiteering became common, people grew suspicious of her intentions. Sometimes Zhang Li would find herself blocked after exchanging just a few messages on WeChat. She herself was cheated a few times: she’d pay a deposit and never receive the promised goods. A few boxes of facemasks sent from Hong Kong, worth tens of thousands of yuan, had to be junked because they had not been disinfected upon delivery.

When she was able to secure supplies, she often had to advance the money for them herself. At one point, someone in Shenzhen donated twelve tons of vegetables. But at the time, the control measures were at their most strict: nobody could leave the county without taking a nucleic acid test. Zhang Li was concerned that there would not be enough time for that, so she hired a driver from elsewhere to deliver the vegetables. He asked for ten thousand yuan, even though the price would be less than five thousand during ordinary times. The volunteers had no choice but to pay him out of their own pockets.
On 9 February, the “Each Province Supports One City” policy was announced. Sixteen provinces around the country would provide aid to sixteen cities in Hubei. Huanggang was matched with Shandong Province, which sent a lot of aid in the form of vegetables. But the hospitals and other departments that were fighting the epidemic had priority. The cities, counties, and towns were considered less important. So Zhang Li and other residents of Wenquan did not receive much. “Our family only received a few pounds of enoki mushrooms”, she said. The price of shiitake mushrooms had already inflated to more than ten yuan per half-kilo. A five-kilo box of assorted vegetables cost fifty yuan, which was more than many people could afford.


Around that time, it so happened that a documentary filmmaker came to Xiantao to visit a face mask factory. The filmmaker met Zhang Li through an aid group and put her in touch with an agricultural by-products wholesale market in Xinfadi, Beijing. But the market’s representatives said that there was nothing they send to her because they had to ensure that the entire city of Beijing was supplied. This meant that, in addition to supplying medical-use goods, Zhang Li and others had to scramble to ensure that the townspeople had their basic needs met throughout February.

“In February, we were already in a state of collapse. In March, it felt like we might not be able to carry on”, Zhang Li said. One of the forces that kept her going was the recognition she received from others. Previously, Zhang Li had not known a lot of people in Yingshan County. But now, everybody knew Zhang Li: the county government, the anti-epidemic command centre, the emergency protection agency, the traffic police, and even the jail. The command centre provided her group with three provisional shipping vehicles--one sedan, one pick-up truck, and one lorry--and granted them a long-term travel pass. She was actually bringing in more supplies than the command centre was able to procure. 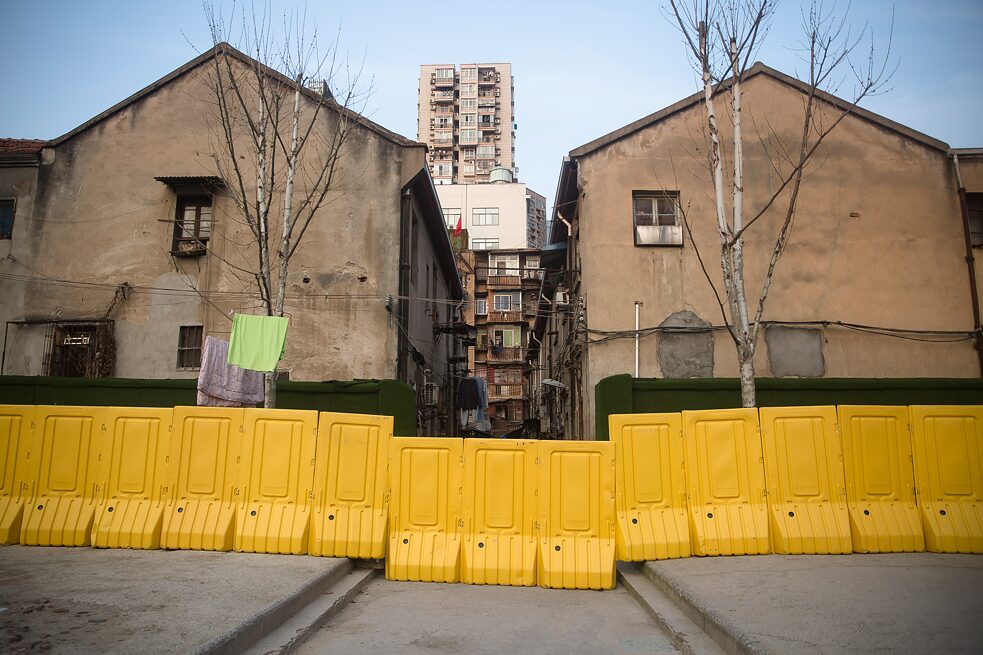 © Goethe-Institut China 2020 Nobody had donated face masks, safety goggles, or protective suits to the funeral homes. In order to prevent contagion, bodies were being directly loaded into vehicles for disposal, without the customary farewells from friends and relations. The funeral homes requested help from Zhang Li, but at the time, not enough medical supplies had been donated, and even the hospitals were shorthanded. The few face masks that Zhang Li could offer were not the disease-preventing N95 kind. “We still have not been able to get N95 masks”, she told them with a sigh. She once made the six-hour round trip to Wuhan for just twenty medical-grade masks.

Psychiatric hospitals and maternity wards were also being overlooked. It was impossible to divert donated goods to them. Donors had begun to specify which hospitals they wanted their supplies to go to, and the recipients had to fill out receipts. People always first thought of the hospitals that had been designated to treat pneumonia. Maternity-ward doctors were strapping garbage bags around their feet to cover their shoes. There was nothing Zhang Li could do except to occasionally buy some food or supplies herself and send them over.
The pneumonia hospitals received the most attention, but even so, there were times when their staff were embarrassed to ask for what they wanted. The command centre was providing basic food supplies, but the night-shift doctors wanted something hot to eat. Zhang Li sought out the public safety department to petition the command centre, because the policemen who worked around the clock were familiar with the feeling of wanting a bowl of rice to eat in the middle of the night shift. But the strict administrative policies required an in-person signature to get the request approved. Zhang Li called the county magistrate at eleven at night. At seven in the morning the following day, the magistrate signed off on a delivery of self-heating rice meals for the doctors.
Zhang Li was disappointed by the behaviour of some donors. One food company in Bangbu, Anhui contributed one thousand cases of self-heating rice. The tacitly agreed-upon operating procedure was for the volunteer to take send a picture of the donated items once they arrived at the hospital, but this donor wanted more. They requested that Zhang Li produce a banner with the company’s name on it, as well as a donation certificate. All of the printing shops in the county had long since closed their doors, and it took Zhang Li quite some time to find a friend who could get it done. The company even wanted the photo taken with the banner held aloft by doctors in protective suits—and the person who answered the phone could not be in the picture. Protective suits are single-use, and they were already very scarce, so the doctors had to find used ones to put back on for the photo. The company also asked that the doctors took videos of themselves eating the rice, mentioning the brand by name, and remarking upon the deliciousness of the rice. They planned to share these videos on TikTok and Kuaishou.

On 27 February, the number of confirmed diagnoses in Yingshan County dropped to zero. But that didn’t mean that Zhang Li could relax. The cousin of one of her volunteers had fallen ill, with red spots all over his body and blood platelet levels below five percent. The doctors at the County People’s Hospital thought that he might have tuberculosis, but they weren’t equipped to perform a bone marrow biopsy. Zhang Li helped them contact a hospital in Wuhan with better resources. She also helped the command centre find five hundred forehead thermometers and one thousand contact thermometers.

According to Zhang Li, “Yingshan County is actually very beautiful, with seas of flowers in the spring, river-rafting in the summer, red leaves in the autumn, and hot springs in the winter”. She hopes that the people who have helped her will have a chance to see for themselves. But she is also still concerned about whether her students will be ready for their college entrance examinations.