Experience international silent films with live music:
The Goethe-Institut together with the Japan Foundation Manila, the Instituto Cervantes, the Film Development Council of the Philippines and the embassies of France, Italy and the United States of America proudly presents the 8. International Silent Film Festival.
This year’s silent films from Germany, France, Italy, Japan, Spain, the Philippines and the USA will be shown from August 28 to August 31, 2014 at the Cinecomplex of Shangri-La Plaza Mall.
The films will be accompanied by famous local and international musicians and bands.
FREE ADMISSION ON FIRST COME, FIRST SERVED BASIS.


For Germany the silent Film “Destiny” (Der müde Tod) has been chosen to be shown during the festival.
Plot:
A young girl pleads Death to bring her deceased lover back to life. Death confronts her with a condition: He tells her three stories set in exotic locales, all involving circumstances similar to her own. She must save the life of at least one of the characters in the stories in order to be with her lover again. Three times the young woman tries and three times she fails. In the end, she realizes that only the ultimate sacrifice would reunite her with her lover. 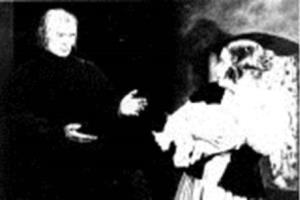 The Film will be accompanied live by Manila Composer Lab (MCL). German film expert, composer and conductor Pierre Oser compiled together with Philippine composers and musicians and the ethnomusicologist and founder of the MCL Jonas Baes the compositions of the film music. 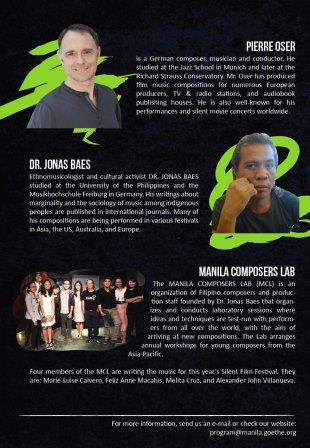