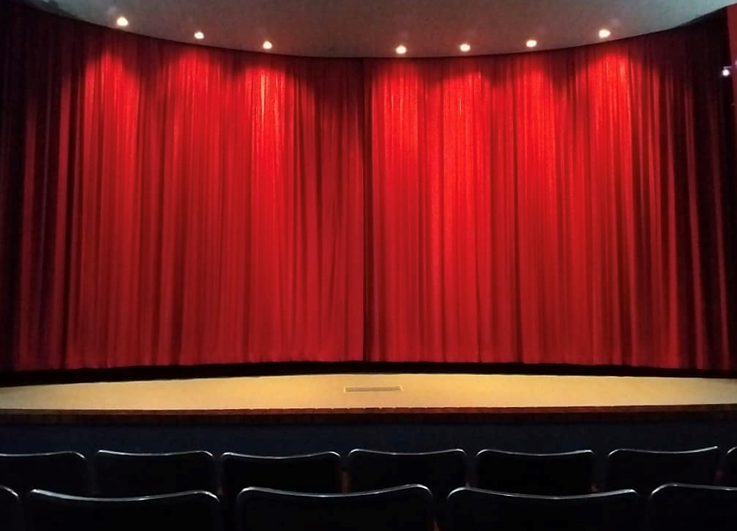 Sunday matinees at Capri Cinema is our initiative for the revival of cinema culture in Karachi.

We chose the Capri cinema as our venue because of its iconic building and history: being one of the oldest single screen cinema in Pakistan serving audience since 1968 with 809 seats.

One Sunday every month we screen the best of either German or Pakistani cinema along with some short films to also promote the local young talents in the field of film making and to also bring German cinema to the audience of Karachi. In the last year, we have built an audience and a group of cinephiles that comes to our Sunday Matinees and we plan to continue it this year as well in autumn. We have had 8 screenings last year with with 930 audience in total.


We also did an open call last summer to gather some short films to screen before the feature films so as to provide a platform for filmmakers to screen their films on a big screen/cinema screen and we got a great number of submissions. We screened the following films out of that submission:


The featured films that we have screened in our Sunday Matinees:

Some of the highlights:

Synopsis of the Films

Holy Gutter and Ghunghroo are the outcomes of our project Film Talents-Voices from Pakistan & Afghanistan. Ghunghroo is about a young man from Karachi’s PIB Colony who breaks societal shackles, embraces his love for classical Indian dance despite all odds and goes to represent his art.
Holy Gutter - The social, personal, and environmental cost of the mismanagement of Lahore’s water resources paid by the Christian societies of Pakistan.

Insha’Allah Democracy by Mo Naqvi
Voting in Pakistan's first election, a filmmaker has to choose between a religious hardliner or a secular liberal leader who happens to be a former military dictator.


Oh Boy/Coffee in Berlin by Jan-Ole Gerster
An aimless university dropout attempts to make sense of life as he spends one fateful day wandering the streets of Berlin.

Riff Raff by Ahmed Arif
One evening in upper-middle class Karachi, a 40-year-old man maneuvers between the deceptive allure of his social scene and the reality he has at home.

No More Backseaters by Gulzar Nayani
No more backseaters  is an experimental and observational documentary on the girls on bike in Karachi.

Lucky Irani Circus by Anam Abbas
The short film is an ode to the Lucky Irani Circus, Pakistan's hardest working circus troupe. Whimsical vignettes of the off stage lives of its child stars and struggling families explore the heartaches and joys of circus life.

Indus Blues by Jawad Sharif
Pakistani folk artists talk about their struggle to keep a fading art form alive while reminding the world what they are about to lose.

After Sabeen by Schokofeh Kamiz
Documentary based on the life of slain T2F founder Sabeen Mahmud. A film capturing the aftermath of the killing of Sabeen Mahmud, founder & director of the Karachi non-profit institution, Peace Niche.

Closer to God by Annette Berger
A fascinating Swiss documentary about two Pakistani men. One is a dervish, undertaking a life-long pilgrimage; the other is the custodian of a centuries-old musical tradition. The film follows the men as they visit impressive holy sites, as well as in their everyday conversations, and provides a beautiful, sideways look at Pakistani society. Q&A followed it with the crew and director of the film


Kachrachi by Ali Mehdi
In the film, the protagonist is a reflection of Karachi, in the form of a mad man, who is addressing its people and reprimanding them for their negligence, lack of civic sense and for the way the city is being mistreated with blatant disregard towards humanity, cleanliness, education and other necessities.

Sapola by Aleem Bukhari
Sapola is a horror-mystery about honour killing.

Talking Money by Sebastian Winkels
Talking Money is an observational documentary movie, where cameras stationed at consultation tables all over the world, show how social transactions are made. Weaving stories from eight countries into one global money conversation, it virtually transforms the cinema into a bank.

The Kick by Andres Veiel
On the night of 13 July 2000 brothers Marco and Marcel Schönfeld, together with their friend Sebastian Fink, violently attacked and killed 16-year-old Marinus Schöberl. Documentary maker Andres Veiel carried out extensive research for the play he wrote about the case, which took place in Uckermark, a district of Berlin. The film is based on and takes its name from the play.

Darling by Saim Sadiq
Pakistani filmmaker Saim Sadiq’s short film Darling won big at the 76th Venice International Film Festival. The masterpiece, which had its world premiere at the festival, has bagged the Orizzonti Award for Best Short Film.It revolves around a young boy named Shani and a trans girl Alina, played by a young trans woman from Lahore—Alina Khan. It features upcoming actress Mehar Bano, Abdullah Malik, and Nadia Afgan as well.

Agency by Omar Rahim
Agency. The film, which revolves around a gay couple looking for a surrogate, reflects on the evolving family dynamic of South Asian contemporary couples, which no longer fall within the conventional bracket.Agency premiered in Mumbai at the Kashish Film Festival, earlier this year, and will hit the festival circuit in Chicago and Washington DC.