Under the title “Urbanities – art and public space in Pakistan,” the collaboration between the Goethe-Institut Pakistan and the Lahore Biennale Foundation incites discursive and artistic contributions and interventions related to Pakistan's controversial and contested urban space, recollecting Henri Lefebvre´s “right to the city” for critical discussion, and contribute to a trajectory leading to the Lahore Biennale in 2017 in a series of events. By way of artistic interventions and critical research possibilities, spheres and impediments of public space and its citizens' engagement with Lahore and Karachi will be explored and negotiated.

The objective of “Urbanities” is a critical exploration of the urban and its peculiarities and possibilities under the premise of individual artistic work and research approaches. “Urbanities“ aims to enable a broad audience to engage with contemporary art through discursive and artistic events, to link the emerging artist-curator generation in Pakistan with the scenes in Germany, and to stimulate a lively exchange of discourse and practice.

Different formats like workshops, artistic research, an artists' residency, and a consecutive programme of talks, discussions and exhibitions slated for the end of the year, reflect on the current definitions of mapping, community and practice, the usage of space, urban spatiality and visuality, the global, local and glocal in relation to the city in flux, on stagnation, progress, artivism and action, on accustomed and contested space, on environmentalism and public art, among other urban phenomena.

The Lahore Biennale Foundation (LBF) is a not for profit organization, committed to the transformative power of art and its role in sustaining a balanced society. LBF aims to expand the role of the arts in Pakistan by making them a larger part of public discourse and consciousness, to introduce art in public spaces, and reestablish a dialogue that cuts across national boundaries, and to creat linkages in the arts between Pakistan and the rest of the world. 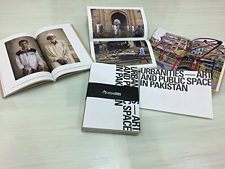