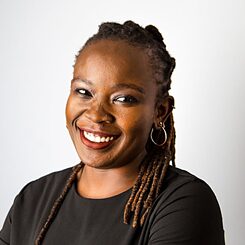 Kenyans, knowing the fragility of the nation’s infrastructure, had been warning the government to take anticipatory measures even before the first case was confirmed. We weren’t heard. The number of confirmed cases is rising. Social distancing is a strange phrase in our tongues. Stay-at-home is a callous edict, when for a majority, their daily bread is pegged to the daily hustle. A nighttime curfew has unleashed state violence and claimed Kenyans’ lives at par with the virus, maybe even more. It’s as if the police are beating the virus out of people.

The Minister of Health’s 4pm news briefings are an anticipatory ritual. We learn about new infections, we are yelled at for not taking this virus seriously. Rinse and repeat.

This newspaper headline by the Daily Nation (April 3, 2020) symbolises the disconnect between the people and those running the country’s affairs.

Reaction to the headline: to be a Kenyan is to be in a constant, daily dance with death. Coronavirus is an addition to the long list of hurdles put on Kenyans’ path.

Covid-19 is yet another 19 is yet another phenomenon that exposes our frail social and systemic structures. The effects of this pandemic’s visit on the country will be felt for years to come.

Our legislators are missing in action (but they’re opining alongside us on social media).  The politicking that was pursued with more fervor than governing has been brought to a rude halt; the attendant resources diverted towards tackling this virus. For once, our news headlines aren’t about politicians’ shenanigans.

No one can seek treatment abroad. If the ruling class and the rich ‘catch this thing’ they have to rely on the healthcare system at home, which has been neglected for a long time. (This is the case across much of the continent).

We are in this together; corona, the equalizer.

At the same time, we are seeing policies that should long have been in place, now being implemented. Local production of protective gear for healthcare professionals is in place. Why were we relying on imports?

The rug under which much of the country’s problems — mostly stemming from exclusionary politics and governance — had been swept, has been lifted. We must deal with the mess. The current administration finally has to work to survive. I don’t believe we can cover up that mess anymore. There will be concerted efforts to do so, nonetheless.

Even if stifled, the voices of discontent can be heard across every corner of the country. They will only grow louder in the months ahead. It gives me hope, oddly, because we have a chance to mend our social fabric. Our utu — our humanity and sense of community — is alive and well. I hope we can galvanise it to shape our governance going forward.