Rwanda has achieved what still seems a long way off in Europe: 61 percent of the members of parliament are women - almost twice as many as in Germany. With the performance project "Learning Feminism from Rwanda", Flinn Works links discourses on gender politics in African societies with current Western theories of gender and feminism. The premiere will take place on October 29, 2020 in the Berlin Sophiensælen. Further stations in Germany as well as in several European and African countries will follow. 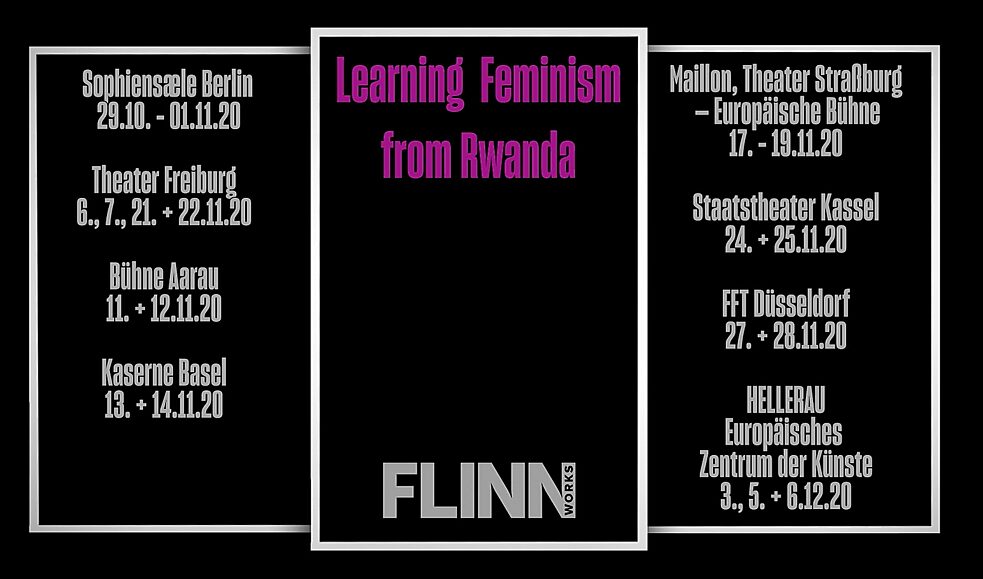 
With the regional project "Learning Feminisms", the Goethe-Institutes are taking a look at the growing importance of feminist discourses in many countries of the sub-Saharan Africa region. The large number of female government representatives* is gaining international recognition. And especially in crisis-ridden societies, women are identified as heads of families or entrepreneurs* with responsibility and stability.

What experiences of female self-determination and equal rights can be found on the continent? What civil society commitments are activists and artists focusing on? "Learning Feminisms" explores these questions in a variety of local and national formats. It links the discourses in African countries with those in Europe, where the history of feminism is predominantly a history of white women.

On the tracks of Fast-Track Feminism

In this context, the Goethe-Institut Kigali supports the German-Rwandan performance "Learning Feminism from Rwanda" by the Berlin theater group Flinn Works, which will premiere on October 29, 2020 in the Sophiensælen. It takes an illuminating look at a society celebrated by the Swiss author Barbara Achermann as a "women's wonderland" - and draws comparisons with the situation in Germany. After the genocide in 1994, Rwanda made gender justice the basis of its policy. Today, 61 percent of the members of parliament there are women, and for President Paul Kagame it is good manners to be a "He for She". In Germany, by contrast, only 31 percent of the members of parliament are women-even though equality has been enshrined in the constitution since 1949.

Under the artistic direction of Lisa Stepf and Sophia Stepf, the multidisciplinary work with four Rwandan performers* and one German performer questions the quota of women as a political instrument. Does emancipation mean the same thing in East Africa and Germany? What can be learned from Rwandan "fast track feminism"? And what social realities shine through behind the statistics? In a combination of musical, rhetorical and dance elements, these questions are explored by two performers live on stage, as well as three performers* in Kigali, who due to travel restrictions only appear on video.

The project is based on two research trips that Flinn Works has undertaken to Rwanda. Among others, the artists* on site worked with Odile Gakire Katese, the founder of "Ingoma Nshya" - an all-female percussion group that is still fighting for recognition. Paradoxically, the image of the loud, drumming woman is still a taboo.

After the Berlin premiere, "Learning Feminism from Rwanda" will be shown in Kassel, Düsseldorf, Freiburg, Aarau, Strasbourg, Freiburg, Dresden and Basel.

"Learning Feminism from Rwanda" is an initiative of the Goethe-Institut and is produced by Flinn Works in cooperation with EANT Festival / Amizero Kompagnie.

The project is also supported by the Berlin Senate Department for Culture and Europe, the Capital Cultural Fund, the Cultural Office of the City of Kassel, the Gerhard-Fieseler Foundation and Between Bridges.


Here also a text by Edwige Dro, one of the participants of the Regional Project: