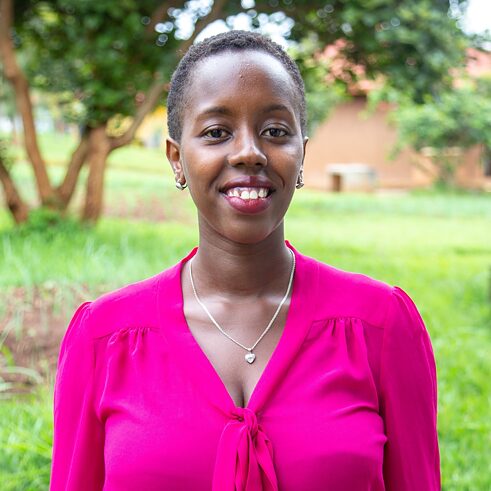 In this interview with Josiane Ishimwe you will learn more about her drive for science, how it shapes perspectives and what encourages Josiane to seek answers in science.

Josiane Ishimwe grew up in the Western province of Rwanda where she attended High School with Math, Chemistry and Physics combination. She has been awarded by the First Lady of Rwanda in 2010 as ’Best Performing Girl’ in the Western province in the senior six national exams.  Afterwards she became mentor of young girls in different secondary schools through Imbuto Foundation’s program which aims to guide young girls and helps them achieve their goals.

After completion of university studies in Electronics and Telecommunication Engineering, she worked at IHS Rwanda as a Network Operating Center Engineer. Later on, she joined the Agahozo Shalom Youth Village at the position of Science center coordinator, and works hand in hand with trainers to create fun and educative hands on based programs in order to encourage students to love science and technology. She has been involved in different projects to bring fun and engaging STEM subjects to young students.
Since 2018 Josiane was involved in the selection of science films for the region and coordinated the Science Film festival activities in Rwanda. She coordinated the I Am Science project in Rwanda in 2018 a project that aimed to encourage young girls to love STEM and to choose a career going in this direction in the future.

“Courage is like a habitus, a habit, a virtue: you get it by courageous acts. It’s like you learn to swim by swimming. You learn courage by couraging”
Marie M. Daly (Biochemist & First African American woman to earn a Ph.D. in chemistry)
Josiane, what comes to your mind if you read that quote?
“A better way to learn is by practice.”

In what sense can science encourage children?
“Science encourages children in the fact that it keeps them curious and they never stop the desire to discover new things.”

How does science shape your own perspective in your life?
“I never fail before I try”

In 2019, Josiane was selected to participate in an intensive leadership program called “TechWomen” for 5 weeks in the Silicon Valley. Now she believes in the peer mentorship that is well explained with this sentence: “never let go an opportunity to be supported”

What is it that drives your passion for science?
“It is funny, but what drives my passion for science was to prove wrong to the existing stereotype that science was made for boys. I never liked how it was always normal for a boy to do well in math. So for me all the science combination that I chose was to prove that we as girls can do it, and this made me doubled my efforts in all my studies. Somehow I was curious how special science was.”

With this year’s topic of the Science Film we reflect on our own well-being and health though a scientific approach. What are your hopes for the outcome of this year’s SFF?
“I hope that people will understand that they play a big role in their health and well-being. It is everyone’s responsibility to take care of their health and I hope they will learn different scientific practices to live a healthy life.”

It gets clear that science is a field to strive for discovery and exploration. Josianes mindset of never failing before trying is a reflection of the premise of science to only get results after trying the experiment. To never try, explore or discover something is no option, neither for science nor for Josiane. Sometimes it seems to be best to go with the perspective of “Learning by Doing” and to just get started.