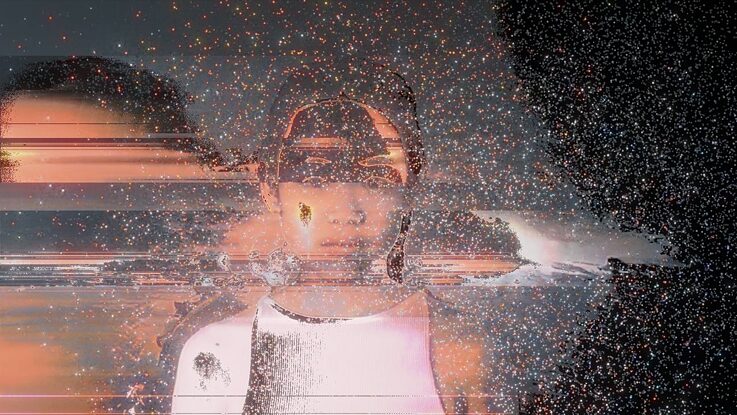 YOUNG BODIES is an inquiry into avatar creation, the Internet gaze, and the possibilities of agency. Conceptualised originally as series of performances and image-based works dissecting and ruminating on the permissible body, the project has since gone through multiple iterations. Taking the local television character of E-Ching, and therefore the artist Charmaine Poh’s 12-year-old body as a tween television actor, as a point of departure, the series responds to discourse surrounding the patriarchal gaze and the female-presenting body. Utilising found footage, deep fakes, chatbots and avatar creation, the series currently consists of multiple moving-image works, an interactive chatbot, as well as archival material.

Over two months, the multidisciplinary collective will extend their explorations to use 136 GOETHE LAB as an idea incubator to develop a new version of bubble, a chatbot first presented at VECTOR #2 at The Esplanade, a laboratory for technical experiments—particularly through coding and cybernetics, and an inclusive gathering space for various public programmes such as workshops, a new table-top role-playing game inspired by the YOUNG BODY universe, and a lecture-performance to expand and articulate research related to the Young Girl.

From 15 to 18 December 2022, the artists will host an open studio, a new table-top role-playing game inspired by the YOUNG BODY universe, and a lecture-performance to expand and articulate research related to the Young Girl.

YOUNG BODIES is a series of enactments dissecting and ruminating on the permissible body. Taking as a point of departure the early 2000s television character of E-Ching, and therefore the artist Charmaine Poh’s 12 year-old body as a tween actor, the series revises the past to proffer restitution and agency. The series currently comprises multiple moving-image works, a performance-lecture, a chatbot, and a table-top role-playing game.

Girlhood is a new table-top role-playing game inspired by the YOUNG BODIES universe. Taking on an intimate 2-person format, this collaborative storytelling game invites both players to be E-Ching, working together to re-imagine what it means to inhabit the avatar of the young girl in an alternate universe.

Expanding upon research surrounding the figure of the Young Girl, this performance-lecture sieves through the intersections of cyberfeminism, pop culture, and artificial intelligence to propose elastic and defiant ways of being in the world.

Charmaine Poh is an artist working between image-making and performance to peel apart,
interrogate, and hold ideas of agency, repair, and the body across worlds.

Chok Si Xuan is an artist investigating material systems, thinking of them as embodiments of
connections or relationships, and attempts to mimic disrupting technologies with bodily
gestures. She is interested in cybernetics – the feedback between humans, living organisms
and machine – and the exploration of physical relationships through systems.

Sonia Kwek is an artist and performer. Her practice centres on exploring the body as material/ the materiality of the body, corporeal sensualities and the potency of kinesics. She works primarily through performance and movement; sometimes creating experiential experiments with participatory and perishable elements; often collaborating in interdisciplinary projects across various spaces.

136 GOETHE LAB is a new project space at the Goethe-Institut Singapore. Housed in the former library and reading room, the space is intended as a response to the need for physical spaces for the arts, and an ongoing conversation with the public and arts community in Singapore.

YOUNG BODIES is supported as part of the open call for 136 GOETHE LAB, which invited applicants to activate the space with a group proposal.