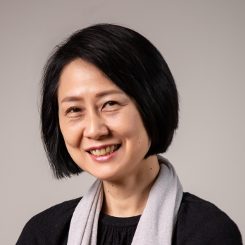 After her return to Japan in 2002, she taught German at various universities in Tokyo, Yokohama and Nagoya, and also worked as a freelance translator. In 2011 she took part in a training course for German teachers at the Goethe Institut in Munich. Her chief interest in translation work lies in current German-language literature and children's and youth literature.

From 2017 to March 2019 she lived with her family in Zurich. Today, Naoko Hosoi lives in Yokohama.