The forest in myth and legend
Where gods and spirits live

The forest, the ideal stage for myths and legends. | Photo (detail): ©Adobe

In the beginning was the tree: whether it is Little Red Riding Hood losing her way or wild men striking terror into people’s hearts, German myths and legends are often associated with the forest. Indeed the Germanic tribes depicted the entire cosmos as a tree.

Roman historian Tacitus could not imagine that anyone would ever voluntarily immigrate to Germania, a land he wrote was covered by “terrible forests and hideous swamps.” Although it is quite likely he never set foot in this “wild place”, his ethnographic work Germania, written around 98 AD, still shapes this idea of backward tribes north of the Alps who pay homage to their gods not in temples but in sacred groves. 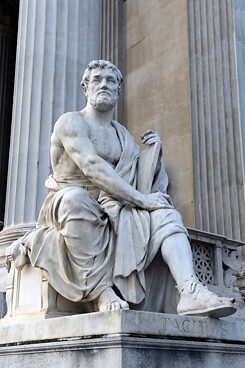 Germania? No, thanks! Although he probably never set foot in the Germanic realm, Tacitus strongly advised his contemporaries against traveling to this untamed landscape. | Photo (detail): ©Adobe Tacitus may have used a wide variety of sources, but the importance of the forest to the Germanic peoples seems to have been shared by all. The historian did not even have to know the details of this cultic tree worship, such as that ash trees were dedicated to the supreme god Wotan or Odin and the oak to thunderous Thor or Donar. If the legend of St. Boniface from the 8th century is to be believed, then the Christian missionary had a good reason for having a “thunder oak” chopped down in Geismar in Hesse. The Frisians present were apparently quite impressed when the imagined vengeance of the old deities failed to materialise.

The tree as a symbol of life

A tree forms the very core of Norse mythology: Yggdrasil, the world ash tree, symbolises the entire cosmos. The branches unite nine worlds, while the roots lead to Asgard, where the Aesir or gods reside – though they may also rule in the lofty heights, depending on your point of view. Yggdrasil links heaven, earth and underworld; the evergreen world tree is the symbol of life and the eternal cycle of birth and death. Other cultures also have such mythical trees. Persians have the Simorgh tree and Hebrews the Etz Chaim. For Greeks it was the Tree of the Hesperides, i.e. the nymphs, and Indians speak of Asvattha, the sacred fig tree.

In the collection of Old Norse sagas and heroic poems, the Edda, Yggdrasil appears as the place the gods meet to deliberate and dispense justice. The medieval court oaks or linden trees might be a derivation of this idea. A gnarled old tree is a rather imposing figure likely to impress nearly everyone, especially when faced with an entire forest – mystifying, dark and enigmatic. For who knows what may be hiding behind the next tree or could be causing the sudden rustling in the undergrowth.

The perfect setting for myths and legends

Anyone who has ever lost their way in the forest, especially at dusk, does not need to have consumed many thrillers to be well and truly spooked. It would be hard to find a better setting for myths and legends. And what would the fairy tales captured by the Brothers Grimm be without the forest? It is where Little Red Riding Hood encounters the wolf, where disoriented Hansel and Gretel find a gingerbread house in a spruce thicket, and where the Frog King’s enchanted well waits beneath an old linden tree. The forest plays a central role in about half of Grimms’ Fairy Tales. Beasts and villains dwell here along with witches and Rumpelstiltskin, a magical little man whose dearest hope is to take the child of a miller’s daughter who has been crowned queen.

Whether tiny or gigantic, the “wild men” are classic protagonists in legends. Wary of civilisation, forest men and wood gnomes are generally described as coarse, endowed with tremendous strength, and covered all over with thick fur or hair. Wielding a club or a rod, they appear mainly in the Alpine region. And during Advent, Krampus is their representative, St Nicholas’ trusty companion not just in Bavaria and Austria, but also in the Czech Republic and Croatia.

Giant Ruebezahl, on the other hand, is a rather exceptional creature. He wanders restlessly through the Krkonose Mountains, sometimes called the Giant Mountains, in Silesia, and the region’s changeable weather is blamed on his capriciousness. There are countless stories about this mountain spirit alone that can hardly be condensed into one, single narrative. But then that is also the charm of these primitive fellows; they simply cannot be pinned down. And if they are, they die like the Wild Man from the Harz Mountains in whose cave an ore vein was found. According to legend, this is how mining began in the region.

Remnants of these untamed woodland creatures come to life again on Shrove Tuesday celebrated in South Germany and especially during the Raunächte or Twelvetide, the twelve days between Christmas and Epiphany, December 25 and January 6. They shamble around as shaggy, frightening fellows making enough noise to drive away the evil spirits. Fire used to fight fire, you might say, and frequently taken as a good opportunity for a bit of over-indulgence.

To this day, forest spirits and creatures play a lively role in traditional festivals in some regions, such as Krampus on St. Nicholas Day or shaggy forest creatures on Shrove Tuesday in Southern Germany. | Photo (detail): © Adobe This is also true of the customs surrounding the maypole, from the setting up of the colourfully decorated birch or spruce log to the alcohol-fuelled guarding and/or stealing of the tree by boys from neighbouring communities. First documented in Aachen in the 13th century and known today from East Frisia to Switzerland and from Upper Lusatia to Saarland, many consider it a modification of earlier Germanic rituals. And while this might seem an obvious conclusion given the appearance of trees, that does not necessarily make it correct. For wherever there is a lot of forest to be found, a lot is imagined to be found in the forest.