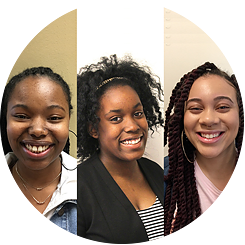 A Long Walk Home (ALWH) is a Chicago-based national non-profit that uses art to educate, inspire, and mobilize young people to end violence against girls and women. ALWH’s Girl/Friends Leadership Institute empowers teen girls to use art to advocate for themselves and other girls, to design campaigns and policies to end dating violence, sexual assault, and street harassment in their Chicago schools and communities, ultimately changing the face of leadership in the women’s movement.

During their shared fellowship, Anaya Patrice Frazier, Danielle Nolen, and Aliyah Young of ALWH continued working toward their goal of developing a permanent memorial project for Black women and girls in Douglas Park, Chicago, where Rekia Boyd, an unarmed 22-year-old African American woman was fatally shot by police officer Dante Servin in 2012, the first public art project of its kind in Chicagoland.

Anaya Patrice Frazier is a junior at Gwendolyn Brooks Pre School in Chicago, IL. Anaya writes and performs her own poetry, and is a community organizer who has plans to create her own organization for youth of color.

Danielle Nolen is a senior at North Lawndale College Preparatory Charter High School in Chicago, IL. Danielle is a photographer, and is committed to making black women and girls stories heard through her art.

Aliyah Young is an early high school graduate from Oak Park River Forest and is currently working toward a B.A. in Anthropology and Africana Studies at DePaul University in Chicago, IL. Aliyah is a spiritual leader, and has led a MeToo youth convening with her peers to discuss and strategize ways to center Black girls in the MeToo Movement in the city of Chicago.