Origin, family, language, identity: These are the subjects of journalist and author Dilek Güngör. In her new book, she writes about the speechlessness between a father and daughter. But silence needn’t necessarily mean a lack of closeness. 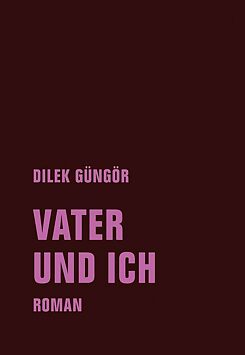 © Verbrecher Verlag “When did we stop speaking to each other? Was it when I turned twelve or thirteen? Or was it not until later when we were already arguing about dating?” These are the opening words of a ZEIT column  by Dilek Güngör. The same questions are at the beginning of her latest novel Vater und ich (Father and I) making it clear that the novel can be read as autobiographical. Güngör stands by this writing “about the obvious, the familiar and the everyday..., about family and family life and about myself.” She can’t and doesn’t want to write about anything else, as she manifestly proclaims in another ZEIT column: “I’ll stick to the familiar, if only because making things up isn’t in my nature. I’ll keep writing about real people, with real characteristics, with bodies, faces, voices that I see and hear when I write.”

As in Ich bin Özlem (I am Özlem) (2019), in her new novel, Güngör writes about family in simple, clear sentences, but this time almost exclusively about a father-daughter relationship. The plot can be described in a few words: A daughter visits her father while her mother goes on a one-week wellness holiday with friends.

Ipek, the first-person narrator, struggles with the speechlessness between herself and her father, which she perceives as the cause and expression of their lost closeness. She asks herself and, in a silent dialogue, often her father how this happened; who did or didn’t do what and when. The loss of this closeness feels like a separation for Ipek. “I only understood that it was over with us when it already was; I missed the moment when it happened. I only understand a lot of things afterwards or not at all, not even when it’s explained to me.”

Her parents are from Turkey and came to Germany in the 1970s. Ipek learns English, then French and Spanish. She loses her Turkish because it’s a “mother tongue that counted for nothing because everyone who spoke Turkish hadn’t learned German properly and didn’t adapt properly.” The linguistic alienation is compounded by the social. Her parents live in a small Swabian town, the daughter goes to study in another city, then to England. She now lives in Berlin. All this has opened up completely new worlds of life and experience to the daughter.

Ipek remembers childhood romps with her father, the pranks and jokes they played together. This is contrasted with the present and its “gridlock of words from many different languages, all of them useless.” Their non-verbal, perhaps much deeper familiarity has long since given way to speech acts, always accompanied by critical thoughts, acts of repeated failure. The longing for wordless understanding remains. “Can we be close again, not like before, but close enough that I could bring you a blanket when you doze off in front of the TV?”

Güngör has succeeded in writing a sensitive, touching book without pathos. On her departure, the father drives his daughter to the station. As usual, he doesn’t walk her to the platform, but simply drops her off in front of the station. But he reveals how much he cares in one small gesture, a courtesy that needs no words.