For his translation of an excerpt from Dilek Güngör’s Ich bin Özlem (Verbrecher Verlag, 2019), the winner of the tenth annual Gutekunst Prize of the Friends of Goethe New York is Duncan Lien.


"The jury of the 2020 Gutekunst Prize enthusiastically commends Duncan Lien for his engaging and nuanced translation of Dilek Güngör’s Ich bin Özlem. The novel is a finely calibrated exploration of what constitutes and determines identity in the gray zone between an immigrant community and the dominant culture. It charts the awakening of Özlem, a twenty-something second-generation Turkish immigrant in Germany, to a subtext of prejudice, preconception, and ingrained patterns of behavior she had largely been able to disregard or protect herself from.  What makes the book compelling is that she does not spare her own assumptions in her reckoning.

Duncan Lien’s supple translation not only persuasively captures Özlem’s voice but also the contradictory and complementary emotions and tones that shift throughout the narrative. There is a sense of shame pervading her account but also one of pride, impatience with her heritage and nostalgia for it, genuine affection for her family and a longing to shed what they represent. Sometimes these emotions alternate, sometimes they overlap. His accomplishment in these eleven pages is having found the register, vocabulary, and rhythm to make them tangible.

This year the 34 entries were particularly strong but Duncan Lien’s stood out for its inventiveness and sprezzatura."

Lien wrote the following on his experience of translating Güngör’s text:

"Dilek Güngör’s 2007 work Das Geheimnis meiner türksichen Großmutter was one of my first encounters with Turkish-German writing so it was a particular pleasure to return to her latest novel Ich bin Özlem as a translator. I can’t say whether this put me at an advantage, especially since more than a decade has passed. Since then I have lived in Turkey and come to a position of familiarity with Turkish culture as an intimate outsider. Although fundamentally different from the protagonist Özlem, who is born in Germany to Turkish parents, this did offer me a privileged position to appreciate her often ambivalent relationship to elements of Turkish culture. Moreover, it helped to make clear that neither the character nor her story can be understood solely in terms of cultural conflict.

Although references to Turkish culture and the incorporation of Turkish words into the text is quite striking, this is only one of many aspects which demand the translator’s attention. The real challenge was to capture the range of emotions and registers of speech in the text, particularly in flashbacks to Özlem’s childhood. One such example is conveying the narrator’s perplexment at the place settings and stern enforcement of table manners when eating Vesper (the Swabian term for a light evening meal) at a friend’s house. An encounter with middle school bullies hinges on ethnic slurs with no obvious English equivalent and is a crucial scene in establishing Özlem’s obsession with how she smells. Happily, I found that understanding of the place of these passages in the narrative helped open up solutions to the translation problems I faced in the text." 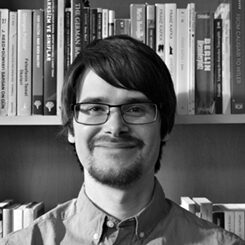 © Özge Şat-Lien Duncan Lien is a third year Ph.D. candidate in Comparative Literature who specializes in transnational German literature with a focus on German-Turkish literary relations. His dissertation project examines the intersection of Cold War-era labor and political migration in the genesis of Turkish-German literature. The project considers authors' engagement with transnational debates over realism and the plurilingual strategies employed by writers, asking how these issues inflect the various conceptions of political and artistic collectivity found in the Turkish-German archive. Additionally, Duncan has published on Turkish-Albanian literary encounters and his article “Rehearsing Better Worlds: Poetry as A Way of Happening in the Works of Tomlinson and MacDiarmid” appeared in Philosophy and Literature. Other teaching and research interests include translation, visual narratives and the relationship of history and literature.

About the Gutekunst Prize of the Friends of Goethe New York

In 2010, the Goethe-Institut New York received a generous donation in memory of Frederick and Grace Gutekunst. A prize was created to identify outstanding young translators of German literature into English and assist them in establishing contact with the translation and publishing communities. As of 2017, the prize is supported by the Friends of Goethe New York.

The Gutekunst Prize of the Friends of Goethe New York is open to college students and to all translators under the age of 35 who, at the time the prize is awarded, have not yet published, nor are under contract for, a book-length translation.