For her translation of an excerpt from Elsa Koester’s Couscous mit Zimt (Frankfurter Verlagsanstalt, 2020), the winner of the eleventh annual Gutekunst Prize of the Friends of Goethe New York is Jennifer Jenson.

The jury, comprised of Tess Lewis, book critic and translator, Alta Price, translator, and Jeremy Davies, senior editor at And Other Stories, stated:

"The jury of the 2021 Gutekunst Prize commends Jennifer Jenson for her lithe translation of Elsa Koester's Couscous mit Zimt ("Couscous with Cinnamon"). With a narrative arc spanning Tunisia, France, Germany—as well as three generations of women reflecting on major moments in their national and family histories—the novel depicts their lives in intimate detail, and in their own voices. These characters' exploration of their own multifaceted European nationalities weaves into a uniquely nuanced consideration of contemporary identity from shifting perspectives.

"Couscous with Cinnamon" charts the fascinating lives and emotional connections bonding the Bellanger family. Grandmother Lucile ("Mamie"), was born in France but grew up in Tunisia. Her daughter, Marie, was born and raised in Tunisia as a Pied-Noir, but fled with her family to France following Tunisian Independence. Marie's daughter, Lisa, was born in Germany and raised by her mother and a German father in Berlin, and only learned French as a teenager. Following the deaths of Lisa's mother and grandmother, she inherits Mamie's apartment in Paris. During her trip to settle the estate and sell the apartment, Lisa recalls episodes from their lives and her own, and other family members arrive with alternative tellings of the family lore. She also sees Europe's current refugees, and her story-within-the-story is punctuated by Marie's first-person tales from her life, including her own flight from Tunisia, her participation in the uprisings of May 1968, an abortion at twenty, and her subsequent alcoholism and attempted suicide. As the novel ends, Lisa may or may not fly back to Berlin.

Jenson's translation captures Koester's natural style and engaging voice, deftly bringing the German into English while maintaining the French flavors sprinkled throughout the original. Conveying the characters' intimate, spoken tone takes great sensitivity, and Jenson skillfully strikes the right balance, staying at an effective remove from the original—not so far as to verge on transgression, but far enough to have a persuasive, colloquial feel. The jury also appreciated Jenson's bold approach to the very first sentence, "It was my country, my land," which captures the physical and politically charged ambiguity of the German term Land. Jenson also arrived at some cleverly befitting solutions, such as rendering Dreckspatz as "mudlark."

The original prose is literary yet has a spoken quality, and faithfully transporting such tones from one language to another is one of translation's greatest challenges: Jenson rises to the task impressively. Much as the book combines sharp insights into several European cultures through distinctive characters' voices, Jennifer Jenson honors their interwoven stories with her strong translation."

You can read Jennifer Jenson's prizewinning translation of an excerpt from Elsa Koester’s Couscous mit Zimt: 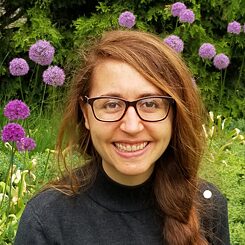 © Nicole Burgoyne Jennifer Jenson is a third year Ph.D. student in Germanic Studies at the University of Chicago. Her dissertation explores identity formation in postwar German and Austrian cultural production, particularly through the representation of matrilineal relationships. Central to the project are questions of how rupture operates as an aesthetically generative concept, including how assemblage techniques like collage and montage allow for a multiplicity of relational constellations that subvert hegemonic understandings of individual and national identity. Jennifer also specializes in pedagogy, having taught courses on German fairy tales and cultural identity, as well as serving as an online pedagogy assistant for the University of Chicago's Division of the Humanities.

About the Gutekunst Prize of the Friends of Goethe New York

In 2010, the Goethe-Institut New York received a generous donation in memory of Frederick and Grace Gutekunst. A prize was created to identify outstanding young translators of German literature into English and assist them in establishing contact with the translation and publishing communities. As of 2017, the prize is supported by the Friends of Goethe New York.

The Gutekunst Prize of the Friends of Goethe New York is open to college students and to all translators under the age of 35 who, at the time the prize is awarded, have not yet published, nor are under contract for, a book-length translation.