The fact that Germany is colourful and diverse is only partially reflected by the media landscape. The situation is different on the podcast scene – that is where minorities are expressing themselves about what energises them.

German society has become more diverse than ever before in its history. Even though people with very different ethnic and cultural backgrounds live together in this country, it is still difficult for minorities to gain a voice in the media. The editorial offices of a number of newspapers, radio and TV stations are still much less diverse than German society. On the audible level, however, the situation is better with podcasts. There are now a number of popular shows by people who come from an immigrant background or who are considered to be a minority for other reasons. Many of them address diversity in their podcasts. 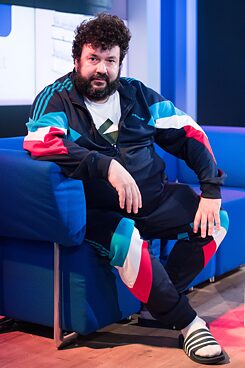 Oliver Polak is not only a podcaster, but also an author and comedian. | Photo (detail): © picture alliance/SvenSimon/Elmar Kremser Oliver Polak manages this particularly elegantly in his podcast Besser als Krieg (Better Than War), which he produces for the public-service broadcaster, Berlin-Brandenburg. Polak is the son of a Jewish father who survived deportation to the ghetto and to the concentration camp. In each episode he invites two guests who are not members of German majority society and talks to them about four different topics that were previously drawn by lot. They sometimes talk about humour, sometimes about racism, sometimes about the countries their families come from. So it’s not just about issues that mainly affect minorities – such as exclusion, identity or equal opportunities – but about things that concern everyone. Besser als Krieg provides a diverse view of issues that do not necessarily have to do with diversity itself.

The very first guests on Besser als Krieg were Anna Dushime and Alice Hasters. Both women run their own podcasts in which they discuss current events from their perspective. Anna Dushime, is an Afro-German, who, with Yelda Türkmen and Ari Christmann, runs a show called Hart Unfair (Hard Unfair) which regularly criticises racism and sexism in German society. The name of the podcast is reminiscent of a popular political talk show on German television – Hart aber Fair (Hard but Fair). In an interview with the daily newspaper (taz), Dushime stated that the podcast was not a direct criticism of the Hart aber Fair TV format. The trio wanted to provide a different perspective on television talk shows, which always have the usual white people voicing their views. The title Hart Unfair refers, on the one hand, to the fact that the three women are regularly criticised in a hurtful way. On the other hand, they themselves do not shy away from harshly attacking people who speak out against integration and diversity.

Alice Hasters, on the other hand, has been producing the podcast Feuer und Brot (Fire and Bread) together with dubbing actor, Maximiliane Häcke, since 2016. In 2020, Hasters, who is a journalist, published the bestseller Was weiße Menschen nicht über Rassismus hören wollen, aber wissen sollten (What White People Don’t Want to Hear About Racism, but Should Know). The two women talk about socially relevant, pop-cultural and personal topics, but even when the focus is only on entertainment or private matters – feminism, the problem of cultural appropriation, toxic masculinity or Haster’s Afro-German identity usually creep in somewhere.

Alice Hasters (left) has been producing the podcast “Feuer und Brot" (Fire and Bread) together with Maximiliane Häcke (right) since 2006, a show in which her Afro-German identity is discussed again and again. | Photo (detail): © picture alliance/Geisler-Fotopress/Jens Krick und © picture alliance/BREUEL-BILD

The interview podcast Kompressor proves that the debates about racism, sexism and the lack of equality and plurality are not only conducted by people who are directly affected by these issues. Kompressor is aired by the public-service radio broadcaster, Deutschlandfunk Kultur and both the presenters and the interviewees mostly come from the majority society. The six- to ten-minute-long interviews, however, often deal with cultural topics that also include diversity issues: racism in children’s books, political pop songs or about who should be allowed to translate the texts of a black poet.

The author and journalist, Sibel Schick, has chosen a special format that manages to do without any guests or dialogues. The episodes of her podcast, Scharf mit alles (Sharp with Everything) are monologues that can last anything up to 20 minutes. Nevertheless, people like listening to the speaker, who was born in Turkey and has lived in Germany since 2009. Scharf mit alles often deals with violence and gender issues. For example, Schick examines whether the corona crisis has different effects on men and women, or how victims are turned into perpetrators in some debates – and vice versa.
All of the podcasts mentioned call into question views that are still firmly anchored in majority society. The authors want to change people’s way of thinking – and start by naming the problems and talking about them. If need be, in the most forthright terms.

Stefan Fischer is a journalist and works for the culture and media sections of the Süddeutsche Zeitung newspaper. He mainly writes for radio and podcasts. Most recently he was a member of the ARD preliminary jury for the Prix Italia.