Houston
There Are Black People In The
Future: Creative Collective Action

How can we visualize the future through the lens of black (hi)stories? We look to artist Alisha B. Wormsley’s afro-futurist text There Are Black People In The Future to catalyze new conversations that promote positive change in a changing city.

Together with Project Row Houses (a Houston community platform that enriches lives through art with an emphasis on cultural identity and its impact on the urban landscape), the Goethe Pop Up Houston launched an Artwork-in-Residence program for community-based projects that engage with Wormsley’s text through art and practice. Projects included an in-house concert, garden installation, community performance, public poetry, textile pieces and student-based histories.

In addition to the residency project, Wormsley collaborated with Houston artists Phillip Pyle II., Robert Hodge and Lovie Olivia on a series of flags that respond to Wormsley’s text “There Are Black People In The Future.” The flags fly in front of the shotgun houses that were restored as artist residencies on the grounds of Project Row Houses. 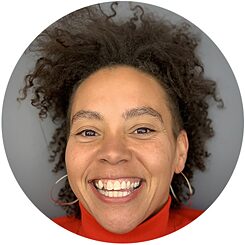 © Alisha B. Wormsley Alisha B. Wormsley is an interdisciplinary artist and cultural producer based in Pittsburgh, PA. Her work focuses on collective memory and the synchronicity of time, specifically through the stories of women of color.

More on Alisha B. Wormsley

With their residency project There are Black Youth in Our Future: Building from Our Legacy, Baiyinah and Summayah Abdullah provide a platform for Houston youth to engage with art, history and their future. Follow their project on Instagram @presentinourfuture. Baiyinah (pronounced “Bay-yin-ah”), also known as Ms. Abdullah, is a 9th grade biology teacher based on Karankawa land in Houston, Texas. Summayah is a senior at the University of Houston, pursuing a degree in Human Development and Family Studies while minoring in Psychology.

Marcos Hernandez Chávez is planting native flowers surrounding the southern pond of Keith-Weiss Park in North Houston. The placement of flowers is to spell out, HAY GENTE MORENA EN EL FUTURO. He hopes that the community of which he is a part of will be able to enjoy the piece and foment their understanding of how important and valued they are in this country. Chávez is a Mexican-born, Texas-raised interdisciplinary artist based in Aldine, Texas. His work is at the intersection of landscape, poetry, and nuestra historia.

Kam Franklin held a virtual performance of her mixed-media work: Homegirl Island, a fantasy oasis that exists within an Afro Futuristic society where Black women are fully protected and praised. The performance took place within The Glitter Garden, a private art instllation and performance studio built inside of her home during the Covid-19 pandemic. Franklin is a singer-songwriter, visual artist, writer, actress, orator, activist, model, and dancer from Houston, Texas. She is best known for her work with the gulf coast soul band, The Suffers.

Rosine Kouamen’s mixed-media work The Cannibalism of Black Women explores the ways Black women are eroded through media, inequities in healthcare, and fatigue resulting from a constant necessity for resilience. Kouamen is a visual artist based in Houston, Texas, who works with numerous forms of media to create a dynamic body of work. Her artistic practice captures the transformation of humanity through visual narratives.

Garry Reece’s project references Wormsley’s text within the context of signage and Black neo-classical poetry, in particular the poets of the Black Arts Movement (BAM).  By exploring the past and highlighting the writers that came before him, Reece seeks to embrace a place in the future for Black people. Reece is a writer and educator based in Houston, Texas.