A Sound Installation by Steve Norton

Visitors will be admitted into the exhibition in small groups and are required to wear a mask and social distance at all times. 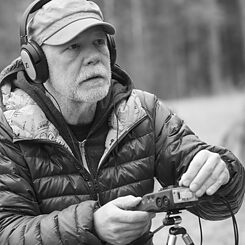 © Jim Winters/Steve Norton Steve Norton’s Requiem is a work of acoustic ecology composed using the sounds made by ten bird species and two frog species that are now extinct. Norton was able to use their sounds to create Requiem because these vanished birds and amphibians went extinct during the era of recorded sound.

In each case, humans were to blame for their extinction. Requiem reminds us that the soundscape — the natural noises and sounds that make up our environment — is irrevocably altered when species become extinct.

Presented in collaboration with Non-Event.

Steve Norton is a sound artist and musician. His artistic research examines electroacoustic music, improvisation as a method, the environment, modernity and society. Steve’s practice is currently focused on the gathering of field-recorded sound which he utilizes in electroacoustic composition and performative contexts. His interest is to increasingly bring the outside world into his work via field recording and topical decisions which engage critical issues. This is exemplified by the work at hand, Requiem, a four-channel sound composition on the topic of extinction, created using the voices of recently-extinct birds and frogs. Steve has been exhibiting, composing and performing in the United States and Canada for over 30 years, and has a dozen installations and over twenty-five recorded releases to his credit. He holds an MFA in Intermedia from the University of Maine.