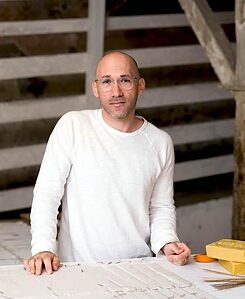 Photo: Jeff Barnett-Winsby Shane Charles Smith (b. 1983, Maine) lives and works between Bangor, ME, and Portland, and was the most recent recipient of the Space Gallery Studio Grant (2020-2021) in Portland. In addition to Gathering at the Goethe-Institut Boston (2021) and site-specific commission for Re-site, Space Gallery, at the Eastern Promenade, Portland, ME (2020), Smith has held recent exhibitions at the Center for Maine Contemporary Art, Rockland (2020), MASS MoCA Studio Program (2020, 2019), I-Park Foundation (2019), Wassaic Project (2019), the School of Visual Arts (New York, NY, 2018), the ICA at Maine College of Art (Portland, ME, 2015), the Ackland Art Museum (Chapel Hill, NC, 2015), and the John and June Allcott Gallery (Chapel Hill, NC, 2015). Performance works include those held at the American Museum of Natural History, NYC, Columbia Sculpture Garden, NYC, and at the High Line, NYC. In 2016, Smith was awarded a permanent commission in the University of North Carolina sculpture garden. He received his Master of Fine Arts degree from the University of North Carolina at Chapel Hill.

©Goethe-Institut Boston
Gathering, the latest exhibition by Shane Charles Smith, deals with the shift between appearance and disappearance and the divide of generational loss. His series Native Soil (2015-2020) commemorated his father’s work as the Penobscot surveyor after the 1980 Maine Indian Claims Settlement Act. Hand-stitched hemp with soil from these lands, mixed with ash and paint, take the form of mapped terrain. Now, with Gathering, Smith has reimagined a work from this series in memoriam to his father, who passed on Memorial Day, 2020. He incorporporated pieces commissioned from Maine-based craftsmen to create new work for this exhibition, which also features movement-based artist Kayva Yang. These works in their entirety are a meditation on the “body in the landscape,” as well as on the responsibility and representation within the personal history of Smith’s heritage.

Supported by the Goethe-Institut Boston, Gathering marks an important continuation in Smith’s work, emphasizing temporality, from the ephemeral to the sculptural. As is characteristic of his singular creations, Smith uses raw form materials (e.g., beeswax, clay, ash) for large-scale, process-based, and performance-aligned works. 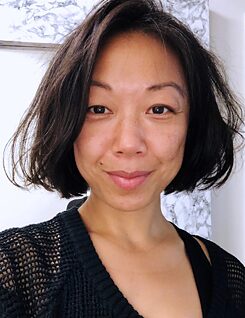 Photo: courtesy of artist Kayva Yang is a New York-based artist who explores body to land intimacy and regeneration through performance, photography, archival materials, and site-specific movement research. Her current projects, Lost 40 and Elastic Elm, investigate extraction, interiority, and indigeneity specific to a boreal forest and a city boulevard. She is a 2020 Create Change Fellow of the Laundromat Project and received grants in 2017 from the Jerome Foundation and Lower Manhattan Cultural Council. Her completed project, Body in Flora (2016) was exhibited at New York University Kimmel Center and performed at Intermedia Arts and Southern Theater in Minneapolis. She also performs for other choreographers including Jill Sigman/ thinkdance and dustin maxwell and formerly danced for Aniccha Arts and Ananya Dance Theatre. Yang is an independent producer and content creator for performing arts organizations. She holds an M.A. in Arts Politics from New York University Tisch School of the Arts.