Film and Discussion The Frankfurt Kitchen

Chicago Women in Architecture, Docomomo and the Goethe-Institut, with support by Eggersmann, present a short film about the Frankfurter Küche and post-screening discussion.
Light refreshments will be served.
Introduction by Kristin Jones.
Presenter: Aidan O'Connor

Margarete "Grete" Schütte-Lihotzky (January 23, 1897, Wien – January 18, 2000) was the first female Austrian architect and a communist activist in the German resistance to Nazism. She is mostly remembered today for designing the so-called Frankfurt kitchen.
As part of the New Frankfurt-project Schütte-Lihotzky created the Frankfurt Kitchen in 1926, which was the prototype of the built-in kitchen now prevalent in the western world. Based on the scientific research by U.S. management expert Frederick Winslow Taylor and her own research, Lihotzky used a railroad dining car kitchen as her model to design a "housewife's laboratory" using a minimum of space but offering a maximum of comfort and equipment to the working mother. The Frankfurt City Council eventually installed 10,000 of her mass-produced, prefabricated kitchens in newly built working-class apartments.
On her 100th birthday Schütte-Lihotzky commented "You'll be surprised that, before I conceived the Frankfurt Kitchen in 1926, I never cooked myself. At home in Vienna my mother cooked, in Frankfurt I went to the Wirtshaus [restaurant/pub]. I designed the kitchen as an architect, not as a housewife."

Dr. Kristin Jones is a founding principal of the architecture firm, Studio Integra, Ltd., and professor of Architecture at Illinois Institute of Technology.  She began her career at some of Chicago's largest firms, including Holabird and Root, DeStefano and Partners and OWP/P (now Cannon Design), working on such projects as University of Chicago's Ratner Athletics Center and the Federal Reserve Bank before founding her firm.  The work of Studio Integra. Ltd. focuses on sustainable community development and urban renewal primarily through urban design, renovation and adaptive reuse.  Kristin's academic research area is architectural education, with special attention to Mies's school of architecture.  Her work has been published and exhibited and she is currently working on a book, Aesthetics in Architectural Education, anticipated to be released at the end of the year. 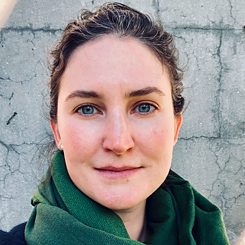 © Aidan O'Connor Aidan O'Connor is an independent curator and consultant specializing in modern and contemporary design. She is currently teaching design history at Pratt Institute in Brooklyn and preparing to move with her family to Minneapolis. She has worked for AIGA and The National Design Awards and in curatorial departments at MoMA, Cooper Hewitt, the Metropolitan Museum of Art, and Harvard’s Peabody Museum of Archaeology & Ethnology.