Since beginning in 2016, Frequency Festival has become Chicago’s most important festival of contemporary and experimental music. The week-long festival is an outgrowth of the weekly Frequency Series at Constellation, which was started by festival director Peter Margasak in May of 2013, presenting bold work from artists based in Chicago, as well as an increasing number of national and international ensembles, composers, and performers. Most of the festival concerts occur at Constellation, but every year other events take place at partner venues including the Museum of Contemporary Art Chicago, the Art Institute of Chicago, the Renaissance Society, and the Chicago Cultural Center. 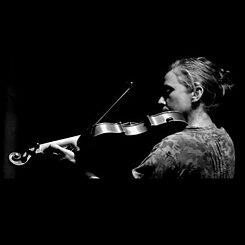 ©Sokolowsko Julia Eckhardt is a musician and curator in the field of the sonic arts. She is a founding member and artistic director of Q-O2 workspace in Brussels, for which she conceptualized various thematic research projects. As a performer of composed and improvised music she has collaborated with numerous artists, and extensively with Eliane Radigue. She has performed internationally, and released a number of recordings. She has been lecturing about topics such as sound, gender and public space, and is (co-)author of The Second Sound, conversation on gender and music, Grounds for Possible Music, The Middle Matter – sound as interstice, and Éliane Radigue – Intermediary Spaces/Espaces intermédiaires.