The screening of Braunschweiger Schule, which includes the US premiere of Berlinale favorite Blastogenese X, will take place in person as well as online. Please register in advance and pay what you can.

The film program will be accompanied by a live (remote) Q&A after the screening with the directors of Blastogenese X, Charlotte Maria Kätzl and Conrad Veit.

Today’s visual arts are hardly imaginable without the presence of the moving image, even if, as cross-border commuters between the art market and the film industry, filmmakers still find it difficult to assert their presence. However, in the Germany of the early 1970s, when the moving image still faced serious opposition within the established art world, it was a pioneering, practically visionary achievement when the University of the Arts in Braunschweig (HBK Braunschweig) had the bold idea to establish a seminar in film and video that understood itself wholly as visual art. In 1972, directed by Gerhard Büttenbender (later co-directed with Birgit Hein and since 2006 by Michael Brynntrup) the film department at HBK Braunschweig came into being. With it, something we can call the “Braunschweiger Schule” (Braunschweig School) has developed, encompassing to this day experimental films, video art, and multimedia installations that, far from conceptions of scenic-narrative feature film, testify both to a powerful visual richness and to an anarchic lightness, and demonstrate how diverse and colorful film can be if only it is afforded full artistic freedom.

Accordingly, when Goethe Pop Up Seattle approached me after the premiere of our film Blastogenese X at the Berlinale regarding a screening of the film and a possible accompanying program, it seemed only fitting to “bring along” a selection of films and representatives of this Braunschweig School, who arose from the same context in which I too was, in part, socialized into art. In the context of Blastogenese X, the program focuses on highly idiosyncratic, at times heightened staging of figurative performance. Common to all these works, whether by Mattuschka, Melhus, Brynntrup, Versum, or Charlotte Maria Kätzl and myself, is that, made with simple and quite limited means, they draw freely from the most various bits and pieces of film history and pop culture, consciously employing trash as an ironic stylistic device in order to give rise to strange, other, nearly iconic figures and filmic spaces. – Conrad Veit, Guest Curator 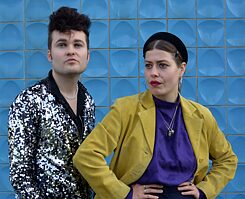 © Conrad Veit / Charlotte Maria Kätzl Conrad Veit (* 1987) and Charlotte Maria Kätzl (* 1993) are an artist duo who have developed various film and video works, video installations, and photographic works, as well as spatial installations since they began studying Fine Arts at the Braunschweig University of Art in 2014. In film, photography, and installation, Veit and Kätzl's works form their own cosmos in which play with the figurative and the different is in the foreground. A game that creates diversity and confusion and questions the boundaries of the heteronormative and the socially constructed. The duo’s works are multimedia-based, combining sculptural elements with elements of costume that often function as drag and performative stagings that lead to film or photographic works or are further developed in space-related installations. Their film Blastogenese X celebrated its premiere at the 2021 Berlinale.