Film Screening German Cinema Now! Shall I Compare You To A Summer’s Day

GERMAN CINEMA NOW!, a celebration of the bold, new, and fantastic in German and transnational cinema, is a monthly film series presented by Goethe Pop Up Seattle. In 2022, GCN! explores states of (apparent) stasis, sameness, and standstill, inviting viewers to look closely at the countless dynamic processes that are always underway, just beneath the surface.

This screening of Shall I Compare You to a Summer’s Day will take place in person only. Please register in advance and pay what you can.
Registration
About the Film:

Synopsis:
Set in Club Scheherazade, in a Cairo at once contemporary and mythical, Shall I Compare You brings a gloriously arty perspective and a digressive, Arabian Nights treatment to a complex of relationships that are limned by Grindr, tempted and troubled by polyamory, and full, always, of sincerity and heart.

Description:
In celebration of Seattle Pride, we are proud to partner with Three Dollar Bill Cinema to present the US premiere of Shall I Compare You to a Summer’s Day, the arty, sensual, and short first feature film by Egyptian video artist and filmmaker Mohammad Shawky Hassan. Imaginatively shot in blue-screen studios in Berlin, Shall I Compare You is set in a time that is part tongue-in-cheek mythical past, part relentlessly contemporary, all queer, and all Cairo. When our mistress of ceremonies (the Egyptian singer, actor, and powerful diva Donia Massoud) undertakes to tell the story of a queer romance, she is diverted endlessly among the intersecting and diverging tales of the men of Club Scheherezade. This storybook Club is in an Egypt where gay and queer people can date, kiss, argue, and hold hands without (or almost without) fear. The fact that this freedom must be fantastical is the determinedly cheerful movie’s sucker punch.

The movie’s light tone belies an artistic seriousness of intent, and the everyday intimacies of the men before the screen are given the weight of legend by fable-like chapter titles from the Arabian Nights and by song, mostly decontextualized Egyptian pop, sung earnestly by the men themselves or by Massoud. Slyly carnal, Shall I Compare You almost literally goes inside relationships, hookups, and the space between while finding wonderful opportunities for solidarity among its characters.

In the film’s slippery, giddily artificial structure, Hassan employs what has been called a queer dramaturgy, characterized by a subversive joy in digression and sexuality not unrelated, perhaps, to that of the original Arabian Nights. Shall I Compare You brings a gloriously peculiar perspective to a complex of relationships that are limned by Grindr, tempted and troubled by polyamory, and full, always, of sincerity and heart.

“These intertwined narratives give off a folk-like quality that leaves you exiting the theatre contemplating what was and what could be.” - Alicia Haddick, Little White Lies

“By extracting pop songs from their heteronormative heritage and casting them in a new queer light, Hassan has pulled out an act of resistance - an act of self-actualisation at the front and centre of a culture that continues to punish homosexuality.” - Joseph Fahim, Middle East Eye 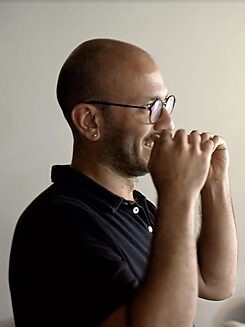 Born in 1981 in Cairo, Egypt, Mohammad Shawky Hassan studied philosophy, film direction and film studies and works as a director, writer, cinematographer and editor. His short film And on a Different Note was shown in the 2015 Forum Expanded program and has been acquired as part of the MoMA’s permanent exhibition.