Photography Exhibition Anna Sofie Hartmann: "I wish I could tell you how I feel"

For Hartmann, known primarily as a filmmaker—writer and director—creating photographs, written texts, and motion pictures is part of a unified artistic practice. In I wish I could tell you how I feel, she explores the storytelling that is so central to her life and work, evoking the moment at which experience is transformed by language. The exhibition centers images of beds in which the artist has slept, from Berlin to Baltimore to Breslau/Wroclaw. “Starting from a simple want to remember where I had spent the night, where I had found rest…I began taking pictures of the beds I stayed in temporarily,” says Hartmann. Over the course of fifteen years, these photos have become part of a growing archive—of place, time, and traces of past selves. Expanding this record, the images are juxtaposed with a selection of elliptical, intimate texts that were written from or about the moments and feelings addressed in the photographs.

In the exhibition, the subtle, oblique pairing of language and images forms proto-narratives that spur visitors to assemble and illuminate stories for themselves. The photographs are printed in various dimensions and simply matted, without glass or framing, welcoming a closer, more bespoke approach. Hartmann’s writings are printed on cards and offered up throughout the gallery space for the viewer to take with them.  A video element, screening research portraits created while making her feature films Limbo (2014) and Giraffe (2019), shows how deeply Hartmann’s photography is interwoven with her directorial practice.

I wish I could tell you how I feel invites the viewer into the process in which, through speech, images, and story, we “wring life through the interpretive lens.” In building this archive, Hartmann attempts a kind of artistic self-portraiture in which the visible self has been removed or abstracted—she is not in the bed, but is rather behind the camera, or writing in a notebook, or is indeed looking at a bed. Hartmann engages the power of places to exude highly specific, intricate feelings and moods, and brings the viewer into the endeavor to stem their very personal loss. 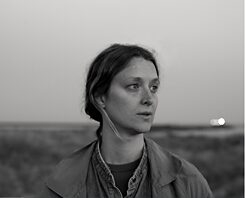 © Anna Sofie Hartmann About the Artist:

Born in 1984, Anna Sofie Hartmann grew up in Nakskov, Denmark. A graduate of the German Film and Television Academy Berlin, her first feature film, Limbo (2014)m premiered at the San Sebastian International Film Festival and subsequently showed at, among others, the IFF Rotterdam, SXSW and Copenhagen PIX, before being nominated for a European Discovery Award at the 2015 European Film Awards. Her second feature, Giraffe (2019), produced by Komplizen Film and co-produced by Profile Pictures, premiered at the Locarno Film Festival, and showed at numerous festivals, including San Sebastian IFF, Mar del Plata IFF, Thessaloniki IFF, CPH PIX, and the Viennale, where it received the FIPRESCI price.

She is the recipient of grants from Nordisk Film Fondet, Lolland Kommunes Kunstlegat, the German National Academic Foundation, The Arts Council of Denmark and the Villa Aurora. She lives in Berlin.


A program featuring Anna Sofie Hartmanns film Limbo and selected short films will show at Northwest Film Forum March 11, in partnership with the Departments of German and Scandinavian Studies at the University of Washington. Her film Giraffe is playing February 25 – March 5 as part of the National Nordic Museum’s Virtual Nordic Light’s Film Festival.