March 17th at Satellite HTX, Goethe Pop Up Houston presents a performance by Ava Vegas as part of the ZEITGEISTER music series.

Doors open at 7:00 PM and attendance is free.
Tickets
About the band 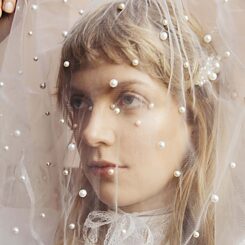 Perhaps the open-air ride leads through an imaginary replica of Las Vegas, the city that already looks like a replica of all those longings that life can only bounce off reality.

But between dream and reality there is a place, ambiguous and wide, a phantasm, and here this place has become music.

Thus, in the songs of Ava Vegas, something glorious flies through the night, something shining, visible in a glittering light reflecting in sequins, at the same time enveloped by an inescapable darkness.

The music is like a record of that state in which one realizes that the world one so longs for cannot in fact exist.

And yet this world can exist after all. It sounds and echoes in the music of Ava Vegas.

Ava Vegas originally came to Berlin to study architecture at the University of the Arts. But today she prefers to design her buildings in her songs, in which she finds a more appropriate place for her ideas. She was born in Göttingen, the city with the most Nobel Prize winners, then moved with her family to Goslar. However, she spent most of her childhood and youth on Ibiza, where she lived in a small house that her father, a professor of cultural studies, had built.

She had just missed the singer Nico (alias Christa Päffgen), who last lived on Ibiza and died of a stroke there in 1988 during a bicycle ride - but the spirit of the dark singer seems to have moved into Ava's music. Thus Vegas is aptly borrowed from a Nico piece as her stage name, and at the same time describes the unreal transit state of the American desert city, which also speaks through her urban music: influenced by the techno clubs of Ibiza, she finally ended up in the capital, where she was encouraged by singer Dagobert to record her music during her early years. And even though Ava Vegas was well prepared for this through singing, piano, ballet and acting lessons, she searched for a long time for the true transfer of her visions, working with Johannes Weber (Jungstötter, P.A. Hülsenbeck), Tim Roth (1k Flowers, Sin Maldita), Max Gruber (Drangsal), Tom Hessler (Fotos) and Arnar Guðjónsson (Warmland, Kaleo, Dream Wife) until she saw the magic in her songs brought to life. This sound is now revealed in nine subtle, catchy pieces: Art Pop somewhere between Lana del Rey, 1980s John Cale, balladesque Leslie Feist and the coquettish smile of Hildegard Knef.

However, if we return to the initial film set, the path leads us further through the lucid (nightmare) dream city to David Lynch's masterpiece Blue Velvet from 1986, whose atmosphere has been directly transferred to the chanson-like, romantically swaying music. There Ava Vegas stands before a velvet curtain. The audience stares spellbound and motionless at the stage, where a beautiful young woman with moist eyes and a knowing smile sings about the very world that can only exist in music.