Watch the Berlin episode about the Soviet Memorial in Berlin’s Treptower Park here.

Philosopher Susan Neiman, director of the Einstein Forum, joins curator Paul Holdengräber for a conversation about the Soviet Memorial in Berlin’s Treptower Park. The monument was erected in 1949 in memory of the thirteen million fallen soldiers of the Soviet Union who gave their lives fighting fascism. On the anniversary of the end of World War II, people commemorate their fallen loved ones there. But despite its monumental size, it has little presence in the collective consciousness of the German capital. 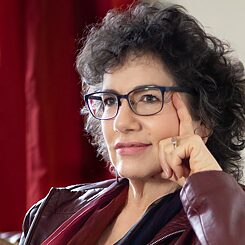 © Wikimedia Commens Susan Neiman is director of the Einstein Forum. Born in Atlanta, Georgia, Neiman studied philosophy at Harvard and the Free University of Berlin. She was professor of philosophy at Yale University and Tel Aviv University before coming to the Einstein Forum in 2000. Her works include Slow Fire: Jewish Notes from Berlin, The Unity of Reason: Rereading Kant, Evil in Modern Thought, Moral Clarity: A Guide for Grown-up Idealists and Why Grow Up? Subversive Thoughts for an Infantile Age.

Paul Holdengräber is an interviewer and curator. He is the Founding Executive Director of Onassis Los Angeles (OLA). Previously, and for 14 years, he was Founder and Director of The New York Public Library’s LIVE from the NYPL cultural series where he interviewed and hosted over 600 events, holding conversations with everyone from Patti Smith to Zadie Smith, Ricky Jay to Jay-Z, Errol Morris to Jan Morris, Wes Anderson to Helen Mirren, Werner Herzog to Mike Tyson. He is the host of the ongoing series The Quarantine Tapes: A week-day program from Onassis LA and dublab.