On July 1 at 9:00am PDT (12:00pm EDT), a pre-recorded dialogue between Karina Griffith and Christa Joo Hyun D'Angelo will premiere on the YouTube channel of the Goethe-Institut Washington; it will be available to viewers in the USA, Mexico, and Canada on the Shaping the Past: Past as Process playlist.

Past as Process is a program of nine films that trouble the notion of fixed histories.

From Past as Process curator Karina Griffith:
"The Gestalt of history is not a figure, it is a process of configuration. This process of shaping the past is sculptural, artistic, and creative, which is why film lends itself so well to our understanding of time and memory."

Part four of Past as Process is called Reshaping the “Single Story”. This section features two documentaries that understand histories and pasts are plural.
Reshaping the "Single Story" includes the film Past, Present, Tense. from filmmaker Christa Joo Hyun D'Angelo.

Predominantly East-German-socialized interviewees look back on German reunification and the hostile time that immediately followed, where racist attacks of arson in Rostock and riots were commonplace. The engaging discussion surrounds the question of German identity and who is served by fixing this position in whiteness. Characteristic of D'Angelo’s work, the conversations remain fluid, intimate, and personal, while speaking volumes to the responsibilities of colonial histories and detriments of cultural amnesia.
More Details 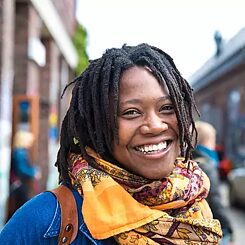 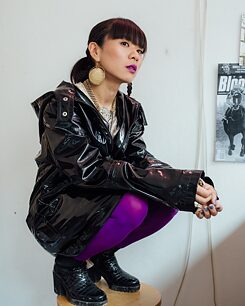 © Ériver Hijano Christa Joo Hyun D'Angelo is an American artist based in Berlin. She studied under TJ Demos at The Maryland Institute College of Art and later The Academy of Fine Arts in Krakow, Poland.

The core of D'Angelo's work confronts fear, vulnerability and what is thus invisible through video, neon, installation, and sculpture. Drawing on personal narratives, experience, and memory, she navigates lewd behaviors and precarious conditions and attempts to redefine what is normal while embracing difference as a source of inspiration and empowerment in order to discover new means of acceptance and ultimately, healing.

Her works have been exhibited at The Screen City Biennial, Halle 14, PS120, VOLTANY, Kunstraum Bethanien, Taiwan Digital Arts Center, Galerie im Turm and The Goethe Institute. She has received grants from District Berlin, Mentoring Artists for Women’s Art Winnipeg, The District of Cultural Fund of Kreuzberg-Friedrichshain and was nominated as a mentee for Forecast's fifth edition.

D'Angelo's work has been reviewed in Artforum, Art in America, Elephant Magazine,The New York Times, and The Guardian and is in The Federal Collection of Contemporary Art Germany. She has designed sets for Fever Ray and King Kong Magazine.

This virtual film program is part of the Goethe-Institut North America's (Institutes and Pop Ups) project Shaping the Past / Gestaltung der Vergangenheit.

Part of series SHAPING THE PAST: PAST AS PROCESS