Democracy Will Win: What Spaces are we Fighting For?

Intellectuals, scientists, and artists bear a special responsibility in a democracy. Their observations, counter-designs, exaggerations, and warnings are an indispensable part of the social debate.

In 1943, German writer and Nobel laureate Thomas Mann said, "It is a terrible spectacle when the irrational becomes popular," in his famous speech at the Library of Congress. This speech, given over 75 years ago, is as relevant now as ever, as we witness the fundamental values of democracy being called into question once again, as populism and nationalism put our democratic society under massive pressure.

The exhibition Thomas Mann: Democracy Will Win! is intended as a concrete contribution to the current debate on both sides of the Atlantic. The Thomas Mann House in Pacific Palisades forms the spatial and metaphorical center of the exhibition. The world-famous writer promoted a new understanding of democracy from his desk in California. Today, the Los Angeles house is once again at the service of intellectual exchange and transatlantic understanding.

Accompanying this exhibition is a wide-ranging program of events that asks which spaces a democracy needs to function, what endangers it, and how our view of the role of architecture in democratic culture has changed in recent decades. 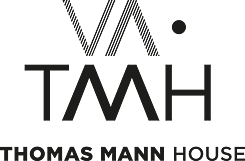